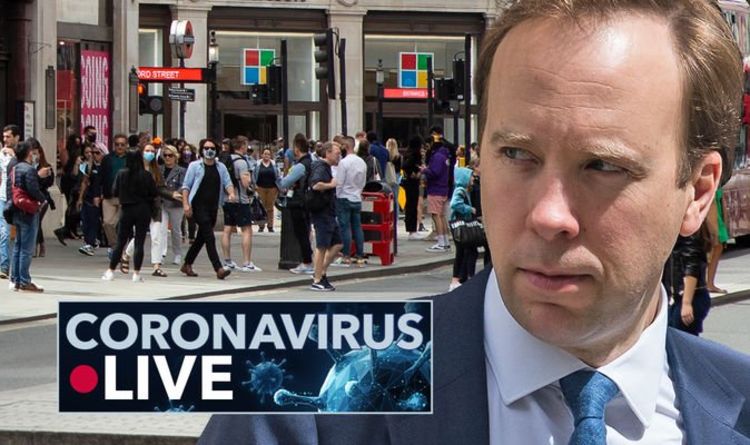 Leicester’s lockdown is expected to be reviewed this week after Mr Hancock revealed the spike in cases in the city last month.

Under the measures, non-essential shops were shut and schools were closed for most pupils.

Following the outbreak in Heredforshirte, the local council said it was arranging food and essential supplies for residents on the site.

Katie Spence, PHE Midlands health protection director, said: “In line with NHS guidance, affected individuals were asked to self-isolate for seven days, with their households and close contacts asked to isolate for 14 days.

“As we have seen a global trend of large food producers being subject to outbreaks, as a precautionary measure, the decision was made to test the entire workforce.

“The initial batch of results showed a significant percentage of positive cases, despite these individuals being asymptomatic.

“We are still awaiting a few final results, but currently we have 73 positive cases of Covid-19 among the workforce.”

7.39am update: Spike in cases on US military base

Japanese officials have confirmed 62 people had tested positive on a US military base on the southern island of Okinawa.

Due to the increased capacity, Mr Hancock said more cases were discovered and can, therefore, be dealt with much quicker.

Writing in The Daily Telegraph, he said: “The result is we can lift more of the lockdown, and take targeted action.

“Each week there are more than 100 local actions taken across the country – some of these will make the news, but many more are swiftly and silently dealt with.”

Footage has emerged showing an improvised street party with large numbers of people dancing and not observing social distancing. The clips, uploaded to Twitter, have...
Read more
U.K.

The UK recorded an additional 6,874 cases along with another 34 deaths. This figure surpassed Thursday when an additional 6,634 cases were announced.Related articlesThe...
Read more
U.K.

London cases have surged in the past week driving Public Health England to put the capital on the UK’s national coronavirus watchlist. The city...
Read more
U.K.

The former Politics Live host and stalwart of the BBC's political coverage announced today he will be moving on to become Chairman of GB...
Read more