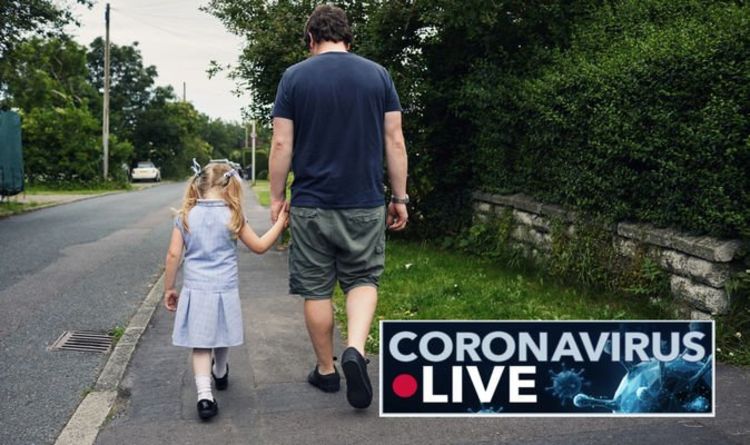 In September all schools will be reopened with the remaining year seven to 11 returning to campuses for the start of the school year.

However, researchers warn fully reopening schools could spark a second wave of coronavirus by December.

A study from UCL and the London School of Hygiene and Tropical Medicine found the combined effect on pupils and parents with school returning would be enough to cause a second wave without an effective test and trace programme.

Prof Chris Bonell, from the London School of Hygiene and Tropical Medicine, told the BBC: “Our concern from the data at the moment is test-trace-isolate is not reaching the coverage we think is the minimum.

“There is clearly a risk of a second pandemic wave… I’m worried. The R [rate of virus spread] is a bit below one [the point at which the number of new cases starts to take off again], but the incidence is high so it’s precarious.”

Dr Jasmina Panovska-Griffiths, from UCL, also warned: “Cases are not coming down as much as we wanted”.

She added: “I would caution against reopening schools when we are doing a lot of other interventions and we don’t know the impact of them.

“Everything depends on control of transmission, there is the threat of a second pandemic wave.”

Meanwhile, Dr Ed Hill, from the University of Warwick, also warned: “If we reopen all schools it could push R above 1 in some regions.

“Decisions surrounding reopening of schools are a difficult trade-off between the epidemiological consequences and the needs of the children in terms of educational development.”

A wedding party contributed to a new surge in coronavirus infections in Iran, President Hassan Rouhani said but insisted the country had no option but to keep its economy open.

President Rouhani said on state TV: “At one location, we witnessed a peak in this epidemic, the source of which was a wedding that caused problems for the people, health workers and losses to the economy and the country’s health system.”

He did not say when or where the wedding took place.

10.30am update: Schools are being “strongly advised” not to admit more pupils as coronavirus could still be spreading in the North West of England

Headteachers in Tameside, east of Manchester, have been told to delay the wider reopening of schools beyond key workers’ and vulnerable children, planned for Monday, “until there is further assurance,” the council’s director of public health, Dr Jeanelle de Gruchy said in a letter to schools.

The North West has the highest rate of coronavirus infections in England according to Public Health England (PHE).

Data from PHE released on Friday gave an R value of 1.01 for the North West and 1.0 for the South West, with all other regions below 1.

Tameside is postponing the reopening of schools until at least June 22.

Indonesia has reported its biggest daily rise in coronavirus infections with 993 new cases.

The total number of COVID-19 cases is now 30,514, a health ministry official said.

Achmad Yurianto added the number of people who had died from coronavirus in Indonesia had risen by 31 to 1,801.

9.45am update: Sunday trading laws could be suspended under Government plans to stimulate the economy following coronavirus

Downing Street is said to be drawing up legislation to enable larger supermarkets to open for more than six hours on Sunday, according to The Times.

The proposed measures to relax Sunday trading and planning laws could be announced as soon as restrictions end.

According to The Times, ministers will argue that the change will “limit the blight of empty properties” and “allow high streets to adapt to the post-coronavirus economy”.

9.35am update: More than 6.77 million people infected with coronavirus

More than 6.77 million people have been reported infected with the new coronavirus globally and 395,053 have died, a Reuters tally showed. Infections have been reported in more than 210 countries and territories since the first cases were identified in China last December.

In the last 24 hours, Russia has reported 8,855 new coronavirus cases and 197 deaths

8.30am update: NHS trusts not consulted or given notice on Government plans for mandatory face coverings by all hospital visitors and outpatients

NHS trusts were not consulted or given notice on Government plans for all hospital visitors and outpatients in England to be required to wear face coverings from June 15 and all hospital staff to need to wear surgical masks, the chief executive of NHS Providers has said.

Chris Hopson told BBC Radio 4’s Today programme: “Two major changes on the use of personal protection equipment and on visiting policy were announced late yesterday afternoon at the end of what to be frank was a very busy, difficult and hard week for our trust leaders, with absolutely no notice or consultation.

“I think it’s the latest in a long line of announcements that have had a major impact on the way the NHS operates in which those frontline organisations feel they have been left completely in the dark and they are then expected to make significant and complex operational changes either immediately or with very little notice.”