Coronavirus map LIVE: What was the POINT? Report issues huge blow to Boris after UK chaos 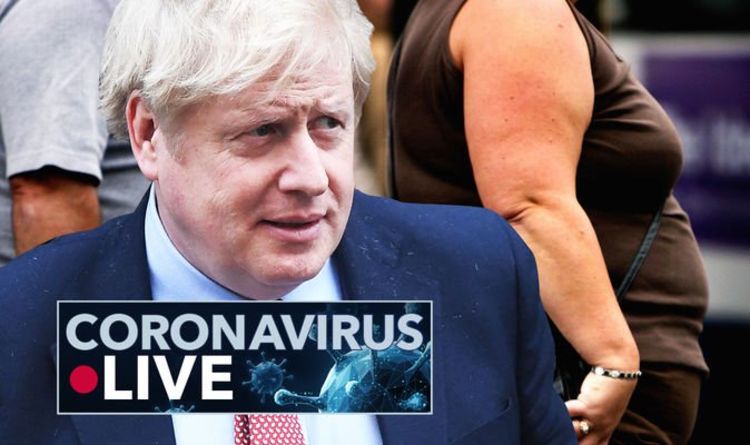 The researchers’ findings could provide a link between the UK’s high death rate and its obesity rates, which are among the worst in Europe.

The mortality rates and cases up until May 1 in 50 countries badly-hit by the pandemic were analysed.

Using a mathematical model, experts measured the impact each nation’s response measures had on its death rate and case rate.

They found that although a lockdown did increase the chances of a coronavirus patient recovering, it had little effect on the country’s overall death rate.

The study claimed: “Government actions such as border closures, full lockdowns, and a high rate of COVID-19 testing were not associated with statistically significant reductions in the number of critical cases or overall mortality.

“The number of days to any border closure was associated with the number of cases per million.

“This suggests that full lockdowns and early border closures may lessen the peak of transmission, and thus prevent health system overcapacity, which would facilitate increased recovery rates.”

The findings come as former Labour Prime Minister Tony Blair warned that coronavirus may never be fully wiped out in Britain.

He urged the Government to focus on containment measures to see the country through a possible second wave in the winter months.

Mr Blair told the Press Association: “The reality is that we’re going to be living with COVID-19 – we’re not really going to be able to eliminate it.”

He said the chances of the UK being hit with another walloping by the virus are “at least 50/50” and said it is “absolutely essential now to prepare for that”.

Rank-and-file police officers are urging shops to refuse entry to people not wearing face coverings after some high street chains said they will not penalise customers who fail to do so.

Police can hand out £100 fines to people in shops, shopping centres, banks, takeaways, post offices, sandwich shops and supermarkets in England who flout the rules.

But John Apter, the national chairman of the Police Federation of England and Wales, said forces “do not have the resources” to widely enforce the law that came into force on Friday.

He said: “It is our members who are expected to police what is a new way of living and I would urge retail outlets to play their part in making the rules crystal clear – if you are not wearing a face covering then you are not coming in.

“Officers will be there to help stores if needed – but only as a last resort, as we simply do not have the resources.

“The vast majority of the public have complied with the lockdown rules so far and I would hope they will continue to do the right thing and wear face coverings in stores to help protect fellow citizens to minimise the spread of the virus.”

8.57am update: Minister dodges question on how face mask rule will be enforced

Minister for Health and Social Care Helen Whately has dodged a question about how the new rule on face masks in England will be enforced.

During an interview with Naga Munchetty on BBC Breakfast, the MP sought to clarify the facts about what the new rule would mean for members of the public – but struggled to explain how the measure would be enforced.

Ms Whately responded: “So as you just said, indeed, as of today, face masks are mandatory to wear in a shop, in a supermarket and in a takeaway, so you should put a face mask on before you go in and keep it on while you’re in the shop.”

She added: “There are some who have exemptions. For instance, if you have a disability that makes it harder than possible to wear a face mask but we’re expecting the vast majority of people to wear face masks.

“In fact, as we’ve seen throughout the pandemic, the vast majority of the British public have followed the guidance, have taken the steps on lockdown and restricting movement and social distancing.”

In a bid to gain support from voters above the border, the government will today send Chief Secretary to the Treasury Steve Barclay to Edinburgh to announce an extra £1.9 billion for Scotland.

The funding is part of a £3.7 billion package for the devolved nations to help them tackle the coronavirus pandemic.

8.06am update: Union leaders warn over new rules on face masks in shops

From today, a new rule means that face coverings are compulsory in shops in England, with few exceptions.

Union leaders have voiced fears that the new rules on wearing face coverings in shops could put workers’ safety at risk.

Officials also warned the Government’s advice has been “confusing”.

Paddy Lillis, general-secretary of shop workers’ union Usdaw, said he supports the mandatory wearing of masks in shops, but called for “clear and detailed” guidance from the Government.

He said: “Usdaw is urging employers to stay with the established two-metre social distancing, using screens at tills and limiting the number of shoppers in store at any one time.

“Employers must also be aware that staff will need regular breaks when they can take their face covering off and have the opportunity to replace it.

“Staff on tills who are behind screens should not be required to wear a face covering.

“We welcome the indication that shop workers will not be expected to enforce the wearing of face coverings.”

Sgt Matt Ratana, died after he was shot at a police station in Croydon in the early hours of Friday Morning. Mr Ratana, died...
Read more
U.K.

Public Health England Director Yvonne Doyle said a total of 6,634 cases of coronavirus have been recorded. It comes as the Prime Minister warned...
Read more