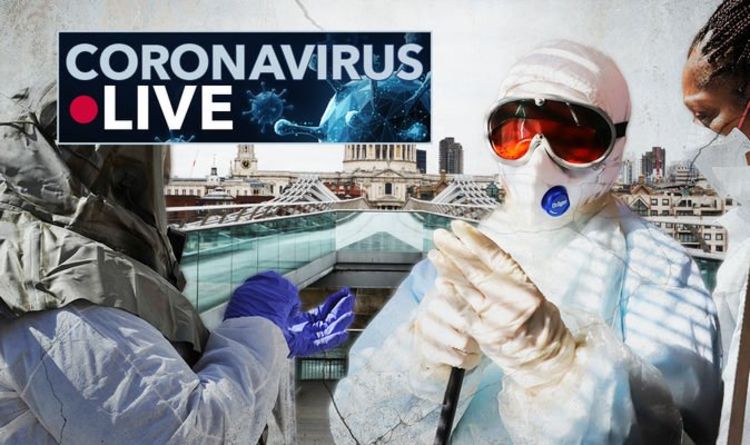 President of the Federation of American Scientists Ali Nouri warned the public may not be “going back to our daily lives” until 2021. Doctro Nouri says normal life cannot resume until a vaccine is created. He warns the the virus could resurge in several ways without a proper vaccine. He said: “There’s not going to be a time when there is a magic date and then everybody goes back to their lives as normal.”

He remains in intensive care, receiving standard oxygen treatment and is breathing without any other assistance.

1.00 pm update: Half of all confirmed cases worldwide are now in Europe

The total number of global cases has surpassed 1.4 million, including more than 80,000 fatalities. Over 300,000 patients are reported to have recovered. Get the latest updates from around the world

This is a slight increase from the 743 deaths reported one day earlier.

The virus has now claimed 14,555 lives in the country, while another 146,690 have tested positive, according to the health ministry.

This week has seen the daily death toll grow by 5 percent as compared to around 9 percent one week earlier the country’s health minister said.

The city-state only produces around 10 percent of its food needs, but restrictions on population movement are wreaking havoc on farming and food supply chains, raising concern of shortages and price increases.

Authorities said in a statement: “The current COVID-19 situation underscores the importance of local food production, as part of Singapore’s strategies to ensure food security.”

The public has been warned not to be complacent amid fears people are flouting social distancing rules by gathering to play team sports and visiting beauty spots.

Health Minister Robin Swann yesterday also warned restrictions on movement may have to be tightened in the fight against coronavirus, stressing those who adhere to the lockdown are helping our health service.

Some 200 flights are scheduled to leave Wuhan on Wednesday.

Donald Trump has criticised the World Health Organization (WHO), and by implication, Beijing, saying the global body is “China centric” and “biased” towards the rival superpower.

As Wuhan, the city at the centre of the outbreak, began to return to normal life, Trump said the WHO had “been wrong about a lot of things”, and threatened to put a hold on WHO funding. When asked if that was a good idea during a pandemic, Trump denied saying it, and then said they would “look at it”.

9.30am update: There has been a call to ban funerals in Wales

There are calls for funerals to be banned in Wales during the coronavirus crisis because of limits on the number of mourners causing distress to families.

Lorraine Barrett, a humanist celebrant of 11 years, is calling for a ban.

The former Welsh Assembly member said an outright prohibition on funerals would protect families as well as crematorium and funeral workers.

The UK is nowhere near ready to lift the lockdown measures it put in place to tackle the spread of Covid-19, London’s mayor Sadiq Khan has said.

Air pollution levels in the UK have gone down significantly in the two weeks since the country went into lockdown to stop slow down the spread.

Some cities have seen nitrogen dioxide (N02) levels fall by up to 60 percent on the same period last year, analysis shows.

The crisis response centre reported on Wednesday that the number of cases had gone up by 1,175, a record daily rise, while the number of people who have died has increased by five to 63.

8.50 am update: UK Prime Minister Boris Johnson is said to be “comfortable” after spending his second night in intensive care.

He said: “I understand he is comfortable, he’s stable, he’s in good spirits, (and) while he’s had oxygen, he hasn’t been on a ventilator”.

Some 709 people in North Korea – which claims it is “totally free” of virus cases – have been tested, says the World Health Organisation.

Of those, 11 are said to be foreigners and 698 locals, Dr Edwin Salvador, the WHO representative to North Korea told Reuters news agency.

The European Union’s top scientist has resigned, condemning what he called Brussels’ “disappointing” response to the coronavirus pandemic.

Mauro Ferrari, the president of the European Research Council, criticised the EU for rejecting his proposal to set up a large-scale scientific programme to fight Covid-19

7.50 am update: Polish elections to be carried out by post, raises transparency concerns

The last-minute decision to carry out the May presidential election by post in Poland due to the coronavirus pandemic has raised concern, EU values and transparency commissioner Vera Jourova has said.

“I followed this process very closely. I’m concerned about free and fair elections and the quality of voting, of the legality and constitutionality of such a vote,” she told the Polish daily newspaper Rzeczpospolita on Wednesday.

The Institute for Health Metrics and Evaluation modelling forecasts that by 4 August the UK will see a total of 66,314 deaths – an average taken from a large estimate range of between 14,572 and 219,211 deaths, indicating the uncertainties around it.

The newly released data is disputed by scientists whose modelling of the likely shape of the UK epidemic is relied on by the government. Prof Neil Ferguson, of Imperial College London, said the IHME figures on “healthcare demand” – including hospital bed use and deaths – were twice as high as they should be.

The Institute for Health Metrics and Evaluation (IHME) in Seattle predicts 66,000 UK deaths from Covid-19 by August, with a peak of nearly 3,000 a day, based on a steep climb in daily deaths early in the outbreak.