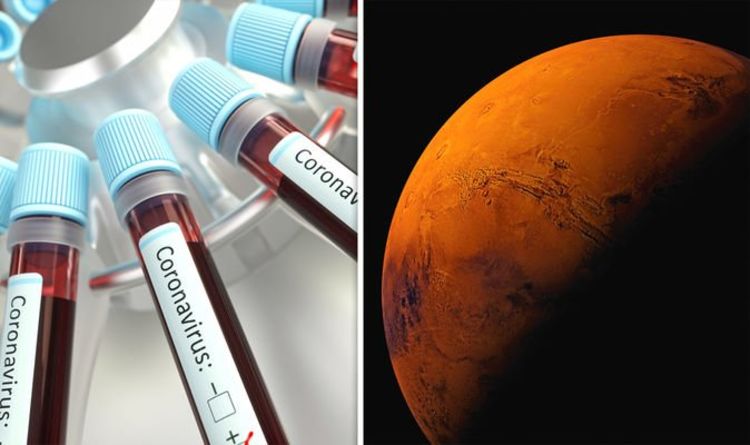 More than 80,000 people have been struck down by a strain of coronavirus known as COVID-19 which has spread rapidly across the globe since it first broke out in late December. The disease has been difficult to contain by health professionals, who have seen it spread to more than 30 countries since the initial outbreak in Wuhan, China.

The entire world was unprepared for the outbreak and we surprised by its emergence out of seemingly nowhere.

Experts have stated scientists should use that as a precaution when bringing samples back from Mars.

NASA is set to send the Mars 2020 rover to the Red Planet this year, which will eventually return soil samples to Earth.

However, what is in these soils is unknown, and could contain harmful bacteria which could infect Earthlings.

This is why scientists want to learn from the coronavirus outbreak just in case there is a bacteria harmful to humans in the Martian soils.

John Rummel, a senior scientist at the SETI Institute in California and NASA’s planetary protection officer from 1986 to 1993 and 1997 to 2006, told space.com: “I think that it might be instructive to consider the climate of concern that accompanies the current situation with coronavirus.

“I think that the challenge for a Mars sample return activity is to be open about precautions taken in the face of ignorance which is what we have when we discuss life on Mars.”

However, scientists note it is more likely that Earth-based bacteria will contaminate Mars, which could cause problems for future Martian inhabitants.

Catharine Conley, who was NASA’s planetary protection officer from 2006 until November 2017, told Space: “As with historical infectious disease epidemics, the coronavirus that’s spreading currently is another example of why it’s so important to understand the consequences of interacting with environments humans rarely contact and then distributing widely whatever [they] picked up.

READ MORE: Coronavirus latest: Will I get paid if I self-isolate?

“In the case of Mars exploration, it’s most likely that Earth organisms transported to Mars could cause problems for future inhabitants.

“If Mars life exists and is brought to Earth, it’s more likely to cause effects on the environment, like the algae recently found to be warming the ice in Greenland, than that it would be a virulent human pathogen.”

NASA hopes to get humans to Mars at some point in the 2030s, and has already begun its preparations.

Construction has now started on a 112-foot dish (34-meter-wide), which workers are building in Goldstone, California, which will eventually form part of an array of telescopes.