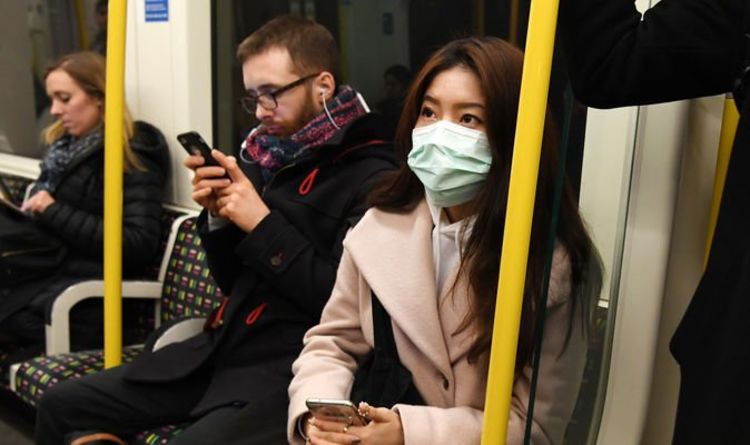 New legislation could also offer employment safeguards for an army of three ­million volunteers so they can leave their main jobs and temporarily help out in a health, community health and social care setting in the event of a widespread pandemic. Law courts could also keep running via video links. The latest moves come as the family of the second person to die with the virus in the UK praised the “truly loving and ­wonderful” 83-year-old man and revealed that they are living a “nightmare” in enforced self-isolation.

Yesterday the number of new cases in the UK increased by 42 overnight to reach 206, with more than 23,000 people tested.

As ministers urge the public to remain calm, Prime Minister Boris Johnson and his pregnant fiancee Carrie Symonds attended the England v Wales Six Nations rugby clash at Twickenham, to underline that “he doesn’t want to be draconian about mass gatherings or events”.

Other football fans around the country were seen wearing face masks in a bid to stave off infection.

Mr Johnson is set to chair an emergency meeting of the government’s Cobra committee, where he could step up the measures still further.

Last night, Health Secretary Matt Hancock said: “I want to assure that the Government is doing everything in its power to be ready to delay and mitigate this threat. Public safety is my top priority.

“I’m working with colleagues across government to ensure we have a proportionate emergency bill, with the right measures to deal with the impacts of a widespread Covid-19 outbreak.

“We plan for the worst and work for the best, and the NHS is working 24/7 to fight this virus. Calls to NHS 111 have increased by more than a third and we have already put in place 500 extra staff to help with this increase.

“Every person has a role to play in managing the spread – whether that’s washing your hands more often for 20 seconds or catching your sneezes.”

Environment Secretary George Eustice met supermarket chiefs on Friday to ensure food supplies are secure. He was reportedly assured they have contingency plans and are taking all the necessary steps to ensure people have the supplies they need, despite many images on social media showing shelves stripped of essentials such as toilet paper and hand sanitiser.

In response to supermarket ­concerns, the Government will look at removing ­curfews for delivery vehicles, and establish where there are “hotspots” of Covid-19 so food stocks are targeted there.

A meeting tomorrow will discuss support for vulnerable groups who may be in isolation and any other areas where the government can offer help. Officials will also meet sports chiefs and broadcasters to discuss how to handle the outbreak’s possible impact on the sporting calendar, including this week’s Cheltenham Festival.

Meanwhile, the family of the 83-year-old said they were unable to begin making funeral arrangements because they are being kept in isolation themselves.

They said: “He was a wonderful husband, dad, grandad and great-grandad who would go to any lengths to support and protect his family.

“On Thursday evening it was confirmed that our loved one tested positive for coronavirus. He passed away shortly after, with us all present at the hospital with him.

“This whole nightmare is not something that we or our loved ones asked for. As we are in isolation currently, we cannot arrange for him to be put to rest and cannot grieve him as we would wish to.”

Passengers aboard the Grand Princess cruise ship, stuck off the coast of California, are also facing a nightmare. They are to be tested by US authorities after two passengers and 19 crew tested positive. The ship, which has more than 3,500 people on board – including 140 Brits – was being taken to a non-commercial port where it could be quarantined. One passenger, Kari Kolstoe, revealed that she is suffering with stage four cancer and has been confined to her cabin.

Actress Dame Joan Collins was earlier seen preparing to fly back to Britain and passing through the airport in a face mask.

It comes as one of the world’s leading disease experts put the virus on a par with the 1918 Spanish flu, which killed up to 100 million people.

Professor John McCauley, at the Francis Crick Institute in London, said: “Looking at the estimates of death rates and the spread, it’s on a similar scale as the Spanish flu pandemic. That came in three waves within a year and this could happen with this.”

Last night it also emerged that crews aboard Britain’s nuclear deterrent sub­marines were allowed to sail for a six-month deployment after simply having their temperatures taken.

However Admiral Roger Lane-Nott said “it would take more than a dozen of its 135-complement to become ill before a captain would even consider turning back”.