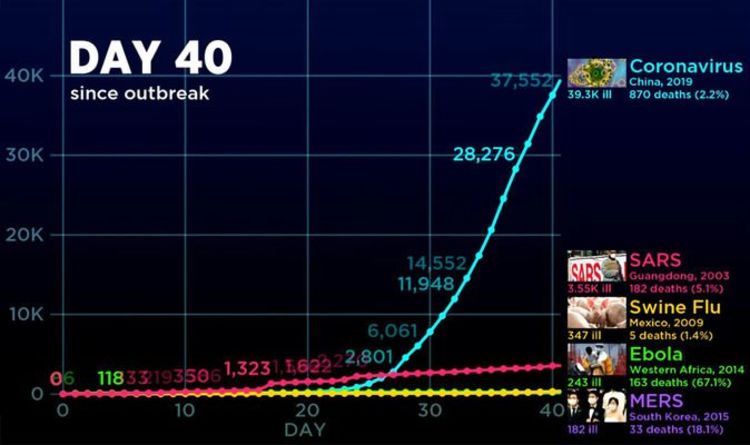 Now, a new graphic has been produced which indicates just how rapidly virus is spreading, with it even outpacing diseases which have previously sparked panic on a global scale.

In 2002-2003, the SARS crisis caused chaos as the viral respiratory illness quickly infected thousands of people largely in Hong Kong.

Such was the rapid spread of the disease, the SARS crisis at the start of the millennium had a huge economic impact on China, with the country’s growth dropping from 11.1 percent in the first quarter of 2003 to 9.1 percent in the second.

Over the first 20 days of the outbreak of coronavirus, just 140 people had been made ill.

However, as graphics starkly point out, while SARS was largely contained after 20 days, Covid-19’s spread has rapidly picked up pace.

After 40 days, coronavirus’ reach had drastically spread to more than 37,500 people compared to the 3,500 infected with SARS over the same timescale.

The increase in risk to the highest possible level comes after the WHO said last week that the “window was narrowing” in preventing Covid-19 becoming a pandemic.

Coronavirus has also taken a huge hit on the global economy, with shares and stocks plummeting at a rate not seen since the 2008 financial crisis.

The three main US financial indexes ended the week 10 percent down on the week before, while London’s FTSE 100 index lost more than 11 percent since Monday, wiping £210billion of the value of the UK’s biggest businesses.

The Bank of England’s Mark Carney has also warned the UK’s economic growth is likely to be dented by Covid-19.