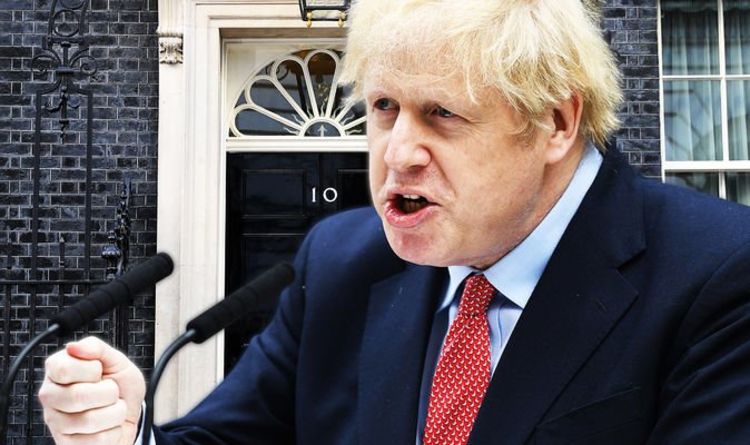 Prime Minister Boris Johnson’s spokesman confirmed this afternoon the UK would advance “with maximum caution” due to fears of a second spike in coronavirus. It comes after Mr Johnson sparked fury after he confirmed he would make an announcement over the future of the UK-wide lockdown on Sunday.

Mr Johnson is due to announce the next steps in Britain’s battle to tackle the coronavirus this weekend following a review by ministers of the current measures that have all but shut the economy and kept millions at home today.

At a cabinet meeting of his top ministers today, Mr Johnson said Britain would advance “with maximum caution” and be guided by the science and data when considering whether any of the strict social distancing measures could be eased.

His spokesman said: “Any easement to the guidelines next week will be very limited.

“We are at a critical moment in the fight against the virus and we will not do anything which risks throwing away the efforts and sacrifices of the British public.”

And overnight a five-point plan for Britain ending the lockdown was leaked. Details were shared on the reopening of schools, workplaces and other areas.

The easing is excpected to begin as early as Monday – despite Britain’s daily death count remaining high, with 464 new hospital deaths confirmed today.

News of Mr Johnson’s plan to ease restrictions provoked fury among his critics, with Piers Morgan accusing him of being “staggeringly reckless”.

Speaking at her daily coronavirus briefing on Thursday, the Scottish First Minister said: “The potential changes that have been reported in the media today have not yet been discussed with the Scottish Government or, as far as I know, with the other devolved governments.”

She said she has to make decisions “informed by the evidence that are right and safe for Scotland”.

She said: “If and when those discussions do take place, I will make very clear, as I have all along, that it is my preference, if possible, for all four UK nations to make changes together at the same pace. That certainly helps us give clear consistent messages to you the public.

“However for that approach to work, we must agree to make changes only when all four governments are satisfied we don’t risk a resurgence of the virus.

“If the Prime Minister decides that he wants to move at a faster pace for England than I consider is right for Scotland, that is his right, I will respect that and I will not criticise him for doing that.”

Mr Johnson had requested a call with the governments in the other parts of the UK later on Thursday.

The Prime Minister’s spokesman appeared to respond to Ms Sturgeon’s concerns, saying Mr Johnson wanted to maintain the four-nation approach to coronavirus measures which has existed so far.