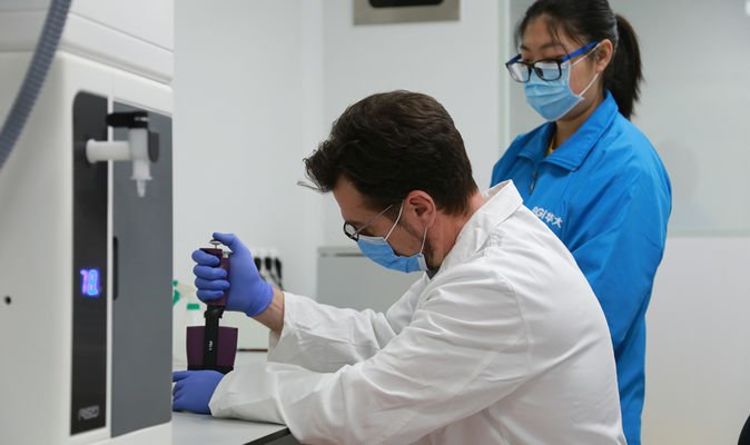 The commonly understood symptoms of coronavirus were originally a dry persistent cough and high fever.

The journal said coronavirus patients can be breathing comfortably with normal carbon dioxide levels but have oxygen saturation levels that are 70 percent and lower.

Nicholas Caputo, an emergency physician in New York, told the publication that doctors believe the new development is potentially ominous in COVID-19 patients .

Dr Jonathan Bannard-Smith, a consultant in critical care and anaesthesia at Manchester Royal Infirmary, spoke to the Guardian about the unusual development.

He said: “It’s intriguing to see so many people coming in, quite how hypoxic they are.

“We’re seeing oxygen saturations that are very low and they’re unaware of that.

“We wouldn’t usually see this phenomenon in influenza or community-acquired pneumonia.

“It’s very much more profound and an example of very abnormal physiology going on before our eyes.”

Elnara Marcia Negri, a pulmonologist in Sao Paulo, told Science she believes subtle clotting might begin early in the lungs, preventing blood from getting properly oxygenated.

The phenomenon has also prompted a debate on how to treat coronavirus patients.

Luciano Gattinoni, a guest professor in intensive care at the University of Göttingen Medical Centre in Germany, has reportedly warned against swooping in to inflate lungs with ventilators or high-pressure oxygen when patients seem comfortable.

Science reported Dr Gattononi said those measures could harm lungs that are inflating on their own but may be needed if patients are not helped by non-invasive treatment.

Studies are yet to be done on whether early detection of hypoxia might help treat coronavirus patients.

Scientists have begun looking into treatments as more cases of hypoxia are discovered and the virus’ effects on biology are better understood.

Several clinical trials are looking at whether blood thinners could prevent or treat complications of COVID-19, including respiratory problems and low blood oxygen, as some have suggested that those with symptoms should be given pulse oximeters, a simple device that clips on to the finger and can be used to detect oxygen levels at home.

However, Dr Mike Charlesworth, an anaesthetist at Wythenshawe hospital in Manchester, said that as of yet there is no evidence that early detection of hypoxia would help avoid severe outcomes, and it would not be practical.

He said: “Transportation of the devices would put more people on the road.

“Then there are issues around people buying them on the internet and whether they [have proper safety certificates] … If you’re at the point of needing your oxygen levels monitored that’s the time to go to hospital.”

ByMichelle Starr Two years after it left Earth, Mercury probe BepiColombo has completed the first of its first flybys of Venus. The manoeuvre is designed...
Read more

ByEarlier this week, rumours claims that No Time To Die was “increasingly likely” to head to streaming and skip cinemas entirely. Now it’s been...
Read more