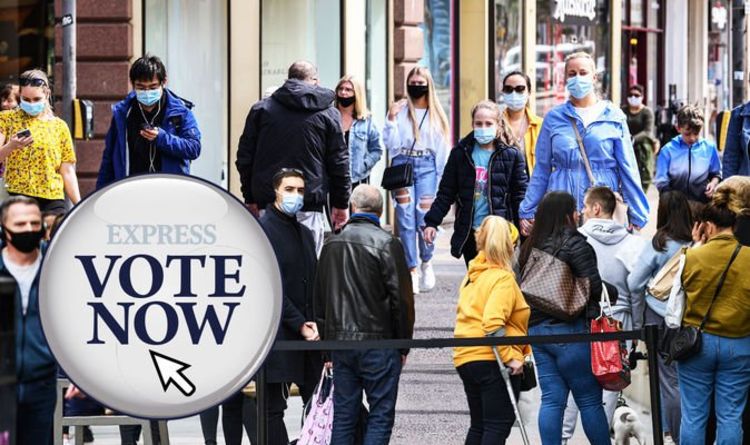 The figure from the Department of Health and Social Care was more than twice that of the 67 people who died from the virus seven days ago and more than triple that of Friday, bringing the total number of UK deaths to 44,798. The increase comes three weeks after shops were allowed to reopen in the first major easing of lockdown and just as restrictions on using public transport are set to be lifted as the Government urges people to return to work rather than stay at home.

Current guidelines for England states that people should consider “all other forms of transport” before using trains, tubes, buses and trams.

But ministers are preparing to ease restrictions to encourage people to return to work and help reboot the economy.

Face masks remain compulsory on public transport and Mr Johnson has hinted they could soon be made mandatory in shops as well.

The Prime Minister also said he wanted people to go back to work “if they can” – in a major shift from the Government’s policy of urging people to work from home where possible.

He said: “I think everybody has sort of taken the ‘stay at home if you can’ – I think we should now say, well, ‘go back to work if you can’.

“Because I think it’s very important that people should try to lead their lives more normally.”

The Government gave Transport for London a £1.6 billion package to continue running services after a collapse in revenue in May.

A Whitehall source told the Sunday Telegraph: “It is costing a great deal of money to run all these train services with so few people on them.

“Different departments are looking at ways to ease in the message of avoiding public transport. The best way to do this, and when, is currently under discussion.

“There is some debate about how best to get the message across that the Government wants to allow more people to travel.”

The paper said the Department for Transport had begun discussions with transport operators about the best way to allow people to return to using public transport networks safely.

It comes after the latest easing of lockdown restrictions saw local cricket teams across England return to the field yesterday while swimmers were able to take a dip in outdoor pools for the first time since March.

Beauticians, tattooists and tanning salons will be allowed to reopen from tomorrow and indoor gyms, swimming pools and sports facilities can reopen from July 25.

Coronavirus map LIVE: Breakthrough as critical vaccine onto next stage- 60,000 to get dose

The pharmaceutical company has announced the launch of its large-scale, pivotal, multi-country Phase 3 trial (ENSEMBLE) for its COVID-19 vaccine candidate, JNJ-78436735, being developed by its Janssen...
Read more
U.K.

Armed guards are at a Rotherham hospital after a reported shooting (Image: GETTY)South Yorkshire Police were called to Park Lane in the Thrybergh area...
Read more
U.K.

The UK has left the EU - and that means the guarantee of free mobile phone roaming throughout the EU, Iceland, Liechtenstein and Norway will...
Read more
U.K.

Boris hits out at Covid rule breakers and warns 'your cough can be someone's death knell!'

Boris Johnson addressed the UK in a pre-recorded speech regarding the current coronavirus crisis and increase in cases across England. This speech comes after...
Read more
U.K.

The incident took place outside The Lair near the city centre. Police were called at around 8.50pm by a member of the public confirmed they...
Read more