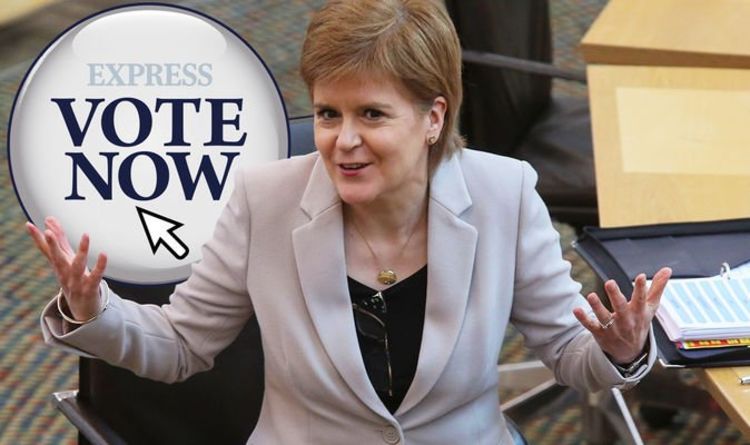 Express.co.uk readers can vote in our poll on whether they understand the SNP leader’s new lockdown slogan. Ms Sturgeon attacked Boris Johnson when he unveiled his “stay alert” message in May, branding it “vague and imprecise”.

The SNP leader refused to drop the previous “stay at home” slogan the four UK nations had been using.

The First Minister said: “I don’t know what ‘stay alert’ means. If you say to me does that mean I stay home or not, I can’t you a straight answer to that and therefore I’m failing in my duty to be clear in terms of what I’m asking you to do.”

But some have pointed out the similarities between Ms Sturgeon’s new slogan “stay safe, protect others, save lives” and the Prime Minister’s message “stay alert, control the virus, save lives”.

Comedian Matt Forde said she was a “genius” for coming up with a “even vaguer” slogan.

The host of the Political Party Podcast wrote on Twitter: “Wonder if we’ll see the same fuss about ‘Stay Safe’ being as confusing as ‘Stay Alert’ was…”

In a later tweet, he added: “A few weeks ago Nicola Sturgeon said she ‘didn’t know what Stay Alert means’.

“Now she’s asking Scotland to ‘Stay Safe’, which is even vaguer. Genius.”

Another Twitter user posted: “Absolutely not having Sturgeon slating Boris a few weeks ago for the slogan Stay Alert only for her to launch her own one today Stay Safe.”

“That’s the same Nicola Sturgeon that said the UK Government’s ‘Stay Alert. Control the Virus. Save Lives’ was ‘vague and imprecise’.”

One more added: “Sturgeon before, ‘What does stay alert even mean it’s so confusing and meaningless?!’ Sturgeon now, ‘Stay safe’.”

Speaking at the Scottish Government’s coronavirus briefing on Friday, Ms Sturgeon said: “There is no doubt the virus in Scotland is now firmly in retreat.

“That is why the changes to the rules and the guidance I announced yesterday, though significant, were also careful, because we know we have to keep the virus in retreat.

“If we all keep doing the right thing, I am more optimistic than I have been in a long time that we are now firmly on the track to getting normality back into our lives.”

She said: “Each letter of that words Facts should serve to remind us all of the key measures we need to comply with.”

The acronym Facts stands for: Face coverings in enclosed spaces, Avoid crowded spaces, Clean your hands and surfaces regularly, Two-metre distancing, Self-isolate and book a test if you have symptoms.