Coronavirus Poll: Will you continue to social distance after the lockdown is lifted? VOTE 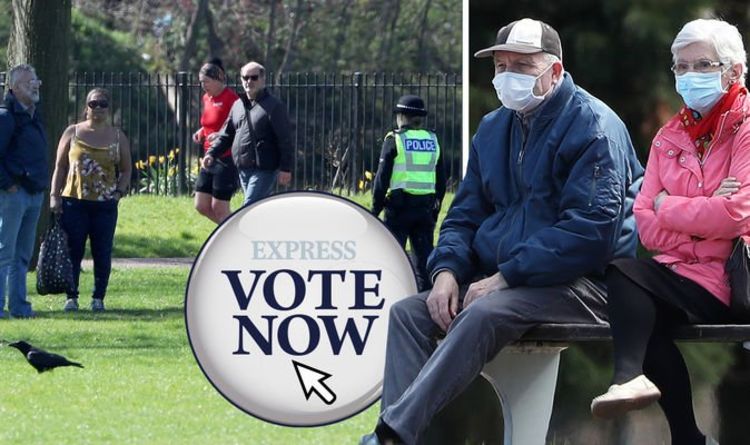 Boris Johnson put under the UK strict social distancing measures last month in order to try and stop the spread of COVID-19. Overall, officials have stated the measures have been followed by the majority of the public and are starting to have an effect on the speed of the outbreak. With that in mind, Express.co.uk is asking, ‘Will you continue to social distance after lockdown lifted?’

Initially, the Prime Minister had set a three-week period after which the measures would be reviewed.

However, since then, officials have continually stated the UK cannot risk easing restrictions too soon.

Health Secretary, Matt Hancock again stated on Friday the public must adhere to the measures in order to protect the NHS.

He said: “Our nurses, our healthcare staff, need to be able to get to work, it’s right and proper they do, but my ask of everybody, please stay at home, save lives and protect my staff.”

Mr Hancock’s warning came as officials will meet this week to discuss an exit strategy from the virus.

According to The Daily Telegraph, social distancing measures may need to remain indefinitely according to Government experts.

Under exit plans which will be drawn up in Whitehall, schools could be the first to emerge from the lockdown in a relaxing of measures from June.

The elderly and most vulnerable will be asked to stay at home for even longer.

Today, Home Secretary, Priti Patel once again reaffirmed the Government will support the police as they to enforce the nationwide lockdown.

She said: “We have given the police powers to enforce the necessary measures we have put in place, including through enforcement fines.

“If you don’t play your part our police will be unafraid to act.

“You will be endangering the lives of your own family, friends and loved ones.”

Martin Hewitt, the Chair of the National Police Chiefs’ Council revealed the number of fines which had been issued across the country.

There have been 1,084 fines issued by 37 forces in England and Wales according to Mr Hewitt.