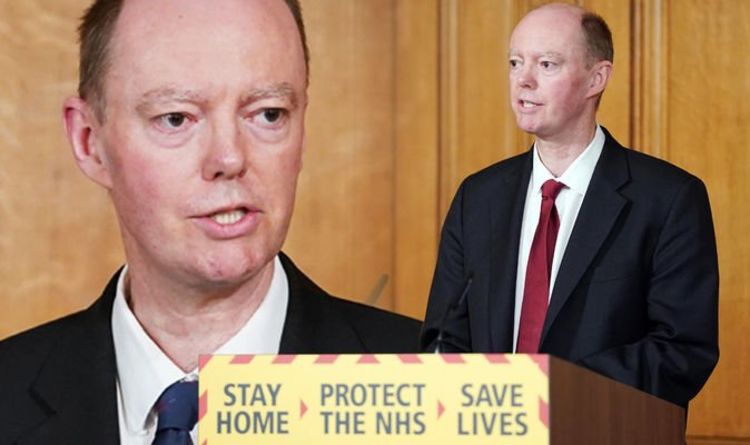 Coronavirus (COVID-19) complications can include shortness of breath, pneumonia and sadly even death in some cases. The UK’s chief medical officer, Chris Whitty, reveals the three risk factors for developing these side effects.

“There are three things which are really clear,” Professor Whitty began.

The Professor outlined that more than 90 percent of the people who have died from COVID-19 had at least one other disease.

He pinpointed cardiovascular disease as one common pre-existing health condition in those who have passed away after contracting COVID-19.

Supporting Professor Whitty’s statement, the Office for National Statistics (ONS) confirmed that in March, 91 percent of fatalities from COVID-19 had at least one other health condition.

This was followed by dementia, which was reported on 531 UK death certificates.

Professor Whitty pointed out that evidence shows that being a man is a “very clear risk factor”.

The ONS reported that twice as many men, compared to women, died from coronavirus in March.

Specifically, the data revealed that, for men, there was around 80 deaths per 100,000 people infected with coronavirus.

It has been suggested that the female chromosomes could have a part to play in females being less prone to serious illnesses.

Women have two “X” chromosomes – which make them biologically female – while men have only one “X” and one “Y” chromosome.

“XY” biologically defines someone as a male. But it is the presence of two “XX” chromosomes found in women that has been linked to better health.

There is a bulk of evidence, published in journals such as JAMA, that link the “XX” chromosomes as to why women are less susceptible to certain diseases.