Coronavirus ROW: Donald Trump threatens to FREEZE US funding for... 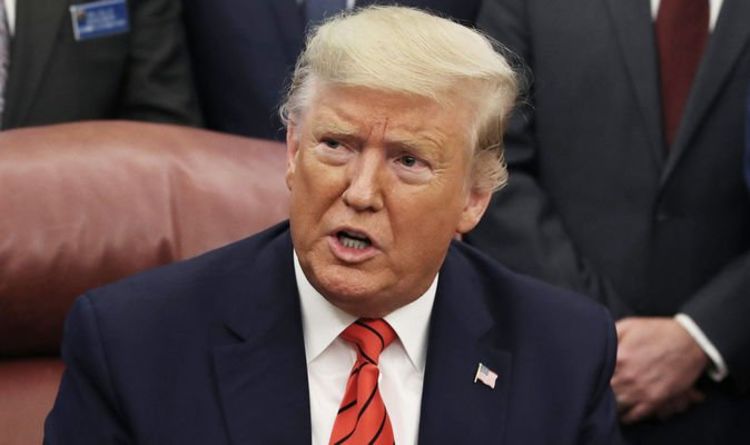 Trump told reporters in the latest press briefing he was “going to put a very powerful hold on” funding to UN body WHO. This would cause major problems for the organisation during the coronavirus pandemic as the biggest funding source of WHO is the United States.

“We’re going to put a hold on money spent to the WHO,” said Trump.

He gave no details about how much money would be withheld and minutes later during the same press conference he said: “I’m not saying I’m going to do it.”

“We will look at ending funding,” he added.

According to Trump, the WHO “seems to be very biased toward China.

His comments built on an earlier statement on Twitter in which he accused the WHO of being “very China centric”.

Trump asked why the WHO had given “such a faulty recommendation,” apparently referring to the UN body’s advice against curtailing international travel to stop the virus which first spread from China.

“We will be giving that a good look. Fortunately I rejected their advice on keeping our borders open to China early on.

JUST IN: Royal heartbreak: George and Charlotte WON’T see the Queen on Easter

“Fortunately I rejected their advice on keeping our borders open to China early on,” Trump wrote.

China faces criticism in Washington, particularly from Republicans, over the way it handled the pandemic.

Trump has repeatedly expressed doubt over the accuracy of Chinese statistics for cases and deaths.

However, the US president himself has faced criticism for “dangerously downplaying” the pandemic.

Democratic lawmakers, governors and politicians criticised the President’s response to the pandemic, claiming he did too little, too late.

Trump has repeatedly been accused by the opposition of putting the economy before the people of America.

Meanwhile, other American conservatives shared Mr Trump’s views on the WHO, Sen. Rick Scott, a Florida Republican claimed that the world body was to blame for “helping Communist China cover up a global pandemic.”

Last night Trump said he may undergo additional tests for the coronavirus after British Prime Minister Boris Johnson was moved to intensive care after testing positive for the disease.

“I think we’ll probably have the be quite a few tests. It’s not the worst idea.

“You know, this system of testing now so quick and so easy,” he said.

The US President sent his best wishes and prayers to Mr Johnson.

He said to the White House: “I want to send best wishes to a great friend of mine, and a great friend of our nation, Boris Johnson, we are very saddened to hear that he was taken into intensive care a little while ago. Americans are all praying for him. He’s been a really good friend.”