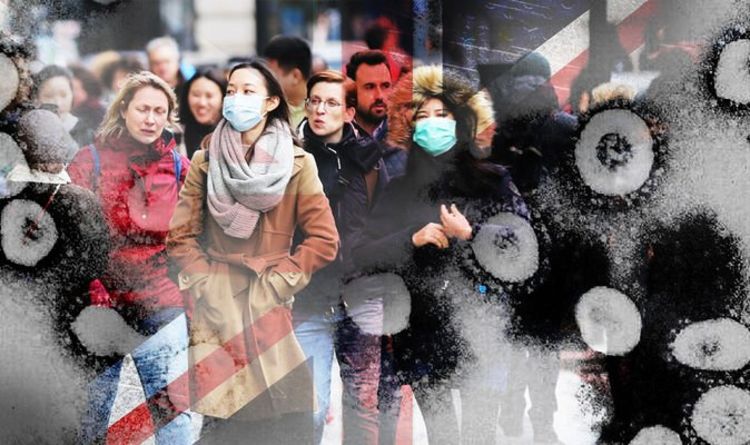 Public Health England (PHE) has released advisory guidelines which tell Britons that widespread transmission in the UK is now “highly likely”. The public body has said it is vital people increase their personal hygiene.

However, a poll conducted by YouGov has shown that just 35 percent of Brits are working on improving their personal hygiene, with the majority – 54 percent – doing absolutely nothing to protect themselves.

PHE has warned precautionary measures should be are implemented such as including washing their hands with soap and water.

Using an alcohol-based hand sanitiser that contains at least 60 percent alcohol is also advised if no soap and water is available.

The body also advised self-quarantine if returning from an affected area, and covering nose and mouth with a tissue when coughing and sneezing.

Of the measures people are taking if they are protecting themselves, washing hands frequently and using hand sanitiser top the list.

Also popular is the avoidance of crowded public spaces to stop catching covid-19.

The poll questioned 1,618 adults between February 28 and March 1.

Despite the low protection measures, currently, one in four Britons say they are “very” or “fairly” scared of contracting the disease.

Earlier today, Prime Minister Boris Johnson said the spread of coronavirus in the UK is “likely” but that people should “go about their business as usual”.

“We’ll be announcing the details of that plan in the course of the days and weeks ahead as the thing develops.”

Britons answering the poll also said they would refrain from touching objects in public, for example, they would now use objects to press lift buttons.

A small proportion of Britons are avoiding going to work, or working from home over coronavirus fears.

Some are wearning face masks when out in public places, as appears to be a popular practice in China, where the virus first started.

However, none said they would stop sending their children to childcare or school over the outbreak.