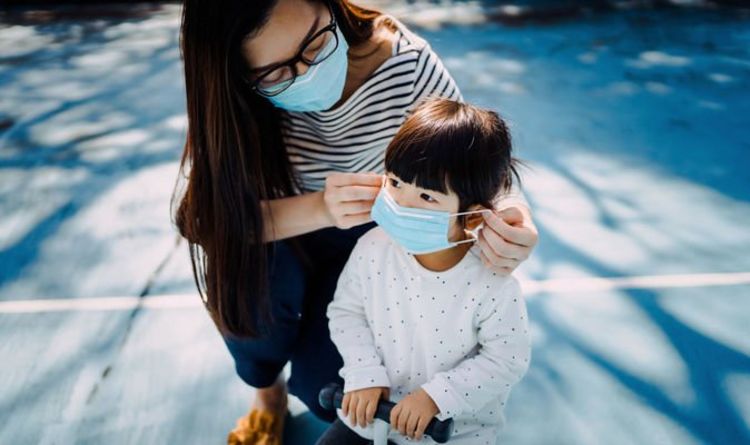 The startling revelation comes on the day Prime Minister Boris Johnson warned the illness, which experts believe originated in the Chinese city of Wuhan towards the end of last, has the potential to render a fifth of the British workforce too sick to work – while insisting the outbreak would not prevent him shaking hands. Celia Hatton, BBC Asia’s Pacific editor, said a fellow parent had been told about the bizarre development, whereby a pupil is selected and sent to an area of the playground “for the rest of lunchtime with no human rights”.  Speaking on the BBC’s global news podcast, she said: “The parent said ‘How was school’ and the kid says ‘Great, we played coronavirus’ and the parent says ‘what’s that?’ and the kid says ‘You breathe on people and they have to be locked in the zone’ – that’s the climbing frame at the school playground – ‘for the rest of lunchtime with no human rights’.

“So this is what children are actually playing in central London.

“I mean it’s funny but it’s also kind of heartbreaking that this is the case.”

On a more worrying note, Ms Hatton claimed there was also a “real problem” with children of Asian ethnicity being “shunned” in schools as a result of the virus.

A listener, responding to podcast, said her son had also told her about the game.

She tweeted: “My son, at a rural primary, explained the rules of the ‘Coronavirus game’ to me last week.

“This is how kids process current affairs and fears.”

Strange as the game may sound, youngsters may only have a limited time to play it if the illness continues to spread through the community.

Several schools, including Wimbledon College in south London, have already been forced to close as a result of cases emerging, and chief medical officer Professor Chris Whitty has said there could be a blanket shut down for two months if the situation deteriorates.

Speaking on Thursday, Prof Whitty warned of a “social cost” – including a knock-on effect on education.

He told the Nuffield Trust summit: One of the things that’s really clear with this virus, much more so than flu, is that anything we do we’re going to have to do for quite a long period of time, probably more than two months.”

He added: “The implications of that are non-trivial, so we need to think that through carefully.

“This is something we face as really quite a serious problem for society potentially if this goes out of control.

“It may not, but if it does globally then we may have to face that.”

The global death toll from the virus is now more than 3,000, with more than 90,000 cases worldwide, most of them in China.

France last week advised people not to shake hands to prevent the spread of the virus, while Switzerland has said its residents should consider dropping the everyday greeting of kissing each other on the cheek.