Coronavirus warning: The sign on your eyelids that may signal a severe form of the virus 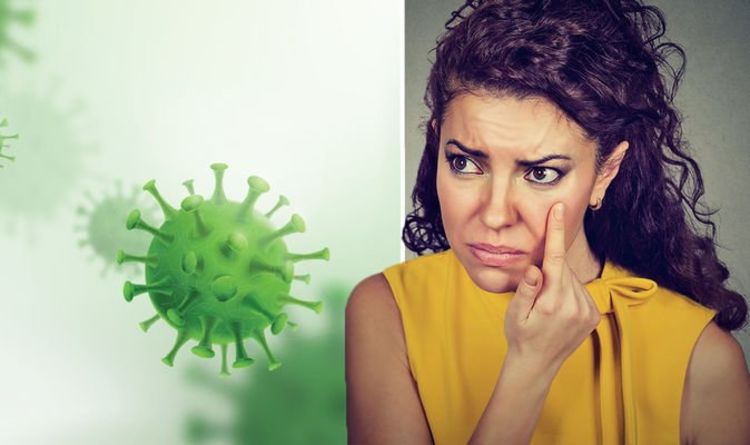 The team, from Garibaldi Hospital in Catania, Italy, said this is the first time a condition between the virus and the disorder has ever been reported.

As the NHS explains, it’s an autoimmune condition, which means it’s the result of the immune system (the body’s natural defence against infection) mistakenly attacking a healthy part of the body.

Five days after his fever began, he developed double vision and muscle fatigue. He soon tested positive for COVID-19.

Doctors later diagnosed the patients with myasthenia gravis after analysing his facial nerves and his reaction to receiving a medication.

On the seventh day, he developed the same symptoms as the first patient in addition to swallowing difficulty, leading to a diagnosis of the autoimmune disorder.

She tested positive for COVID-19 and was subsequently diagnosed with myasthenia gravis.

The time from the coronavirus infection to the beginning of myasthenia gravis symptoms “is consistent with the time from infection to symptoms in other neurologic disorders triggered by infections,” the researchers said.

They added that the findings add to “the growing evidence of other neurologic disorders with presumed autoimmune mechanisms after COVID-19 onset”.

How is myasthenia gravis treated?

While there is no cure, treatment can help keep the symptoms of myasthenia gravis under control so that you’re able to live a largely normal life, says the NHS.

“But some people need ongoing treatment, and occasionally emergency treatment in hospital may be necessary if the condition suddenly gets worse,” says the health body.

Parkinson's is caused by a loss of nerve cells in a specific part of the brain. These nerve cells are used to help send messages...
Read more
Health

By Dan Diamond Azar has frequently met with Trump and joined him on Thursday for a trip to Charlotte, North Carolina, where the president unveiled...
Read more
Health

The 73-year-old continued: “Roger, John and I played our parts live, to a rearranged template I’d put together - complete with some additions to...
Read more

Next up is Marc How profiles, a collection of black and white portraits of A-list celebrities. This book includes Jennifer Lopez, Nicole Kidman and...
Read more