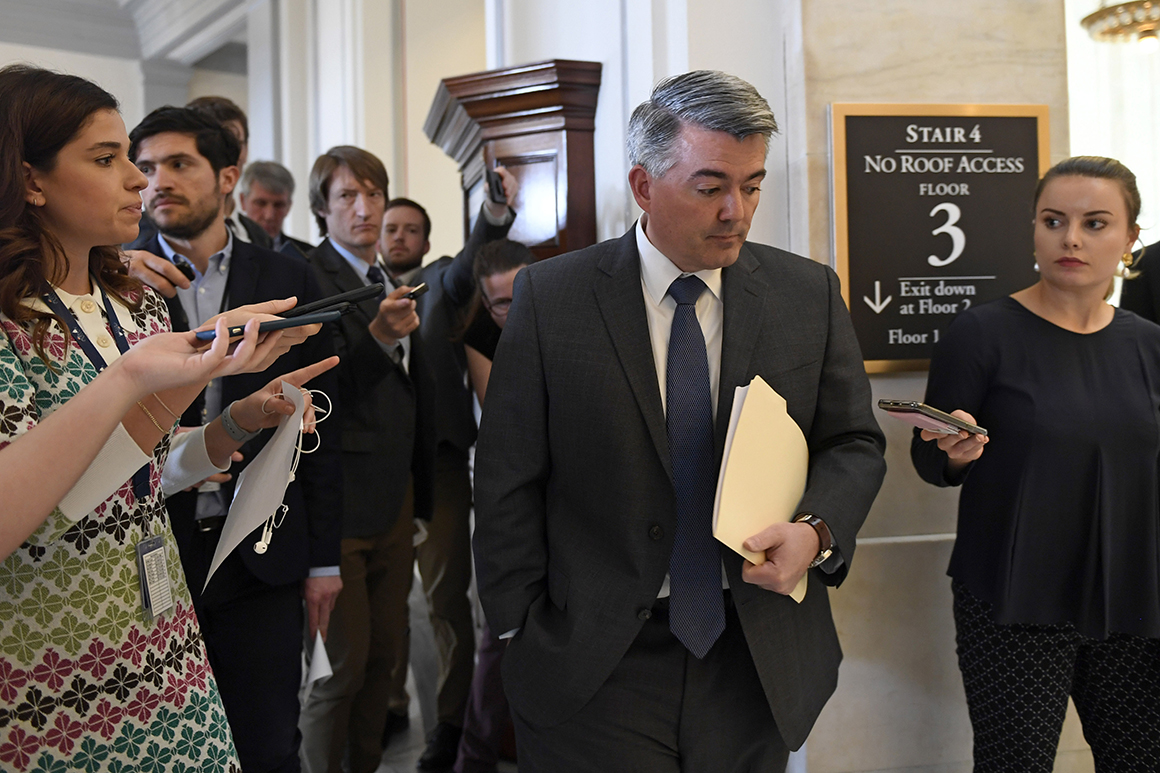 “I think it’s dangerous if the narrative is out there that Gardner is bad on cannabis, because it would turn cannabis into a partisan issue. And it isn’t right now,” said Sal Pace, former Colorado House Democratic leader and board member of the Cannabis Voter Project. Polling data shows that roughly two-thirds of Americans support marijuana legalization, including a majority of Republicans.

“Any suggestion that Gardner has pivoted on this stance is misguided,” Gardner campaign spokesperson Meghan Graf said.

Gardner’s campaign declined to make him available for an interview for this story, but encouraged a number of emissaries from the cannabis industry to reach out to POLITICO and make the case for his value as an industry ally.

In 2018, Gardner and Hickenlooper both left their mark on the cannabis industry. Gardner — a conservative Republican — earned its loyalty when he vowed to block judicial nominees in the Senate until he received a promise from President Donald Trump that the Justice Department would stay out of Colorado’s cannabis industry. Then-governor and moderate Democrat Hickenlooper vetoed three cannabis bills, angering much of the industry and leaving a permanent bad taste in their mouths for the politician.

Hickenlooper’s campaign said as governor, he helped Colorado become a model for marijuana legalization, and he would be a friend to the industry going forward.

“As senator, John will fight for federal decriminalization, to declassify cannabis from Schedule I, and actually pass banking reform — something Sen. Gardner has failed to get through Mitch McConnell’s Senate,” Deputy Communications Director Alyssa Roberts said. Removing cannabis from Schedule I of the Controlled Substances Act would lift the federal ban on marijuana.

Democratic and Republican strategists say the industry is formidable when mobilized. Neither candidate, however, has activated the cannabis industry’s political machine in 2020 in the way it turned out for Polis.

In the 2018 gubernatorial contest, Polis held voter registration drives at dispensaries, had staffers devoted to cannabis issues and worked closely with the industry to turn out employees and consumers. Pace, the former Colorado House leader who helped with Polis’ 2018 effort, said cannabis industry worker turnout increased from 29 percent in 2014 to over 50 percent in 2018 — approximately 15,000 voters. Pace also worked with dispensaries to reach the more than 1 million cannabis consumers in the state.

While some industry leaders, Pace, and lobbyists, including Melissa Kuipers Blake of Brownstein Hyatt Farber Schreck — who represents the Cannabis Trade Federation — say Gardner retains more support from the cannabis industry, the Democratic narrative of him being all talk and no action could influence undecided voters. When Gardner threatened to hold up the Senate’s Memorial Day recess this week, Hickenlooper accused him of giving up too easily and not standing his ground to get more from McConnell. Gardner received just one concession from McConnell, and it was to create funding for maintenance projects on federal lands, not cannabis banking. Colorado Democrats also note Hickenlooper could help flip the Senate blue — creating a much clearer path for cannabis legislation.

“At the end of the day,” said Andrew Short, a Democratic strategist in Colorado, “the industry needs to see results.”

Gardner’s cannabis moment may have already passed, however. Current polling — which shows Hickenlooper up 54 to 36 percentage points in Colorado — may be the writing on the wall for Republican leaders. If McConnell thinks Gardner can’t be saved, advocates and staffers say, he may be less inclined to pass Gardner’s legislation.

“It’s always helpful to have someone who’s vulnerable championing your issue,” a Democrat House staffer working closely on cannabis legislation said in April. “If Mitch McConnell thought that he was super in play and could save Cory Gardner, things might be a little different. But I think that it’s just, you have someone who’s so underwater.”