Cosmic cataclysm: Astronomers spot nearby planet in a 'death spiral' it can't escape 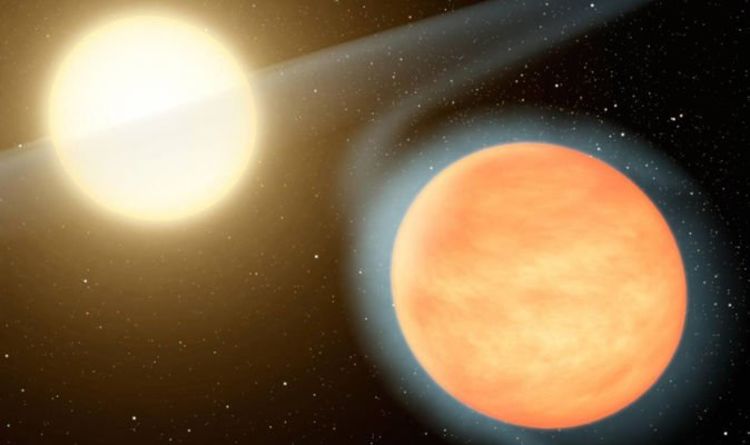 Our planet is not alone among worlds where the clock is ticking on its inevitable demise. Earth could collide with another planet, be sucked inside a black hole, or face annihilation by asteroids.

However, experts already know the most likely doomsday scenario for our world: the Sun will eventually expand into a red giant and incinerate the Earth.

Astrophysicists at Princeton University have now spotted another planet spiralling in toward its host star, heading toward certain death.

The world called WASP-12b is known as a “hot Jupiter,” a giant gaseous planet resembling our Solar System’s largest planet.

WASP-12 is relatively near to its own star, orbiting its sun in just 26 hours.

To put this into context, Earth takes 365 days to orbit the Sun, while even the Solar System’s most innermost planet Mercury, takes 88 days to circle the star.

Joshua Winn, a professor of astrophysical sciences at Princeton and one of the paper’s authors, said: “Ever since the discovery of the first ‘hot Jupiter’ in 1995 – a discovery recognised with this year’s Nobel Prize in Physics – we have wondered how long such planets can survive.

“We were pretty sure they could not last forever. The strong gravitational interactions between the planet and the star should cause the planet to spiral inward and be destroyed, but nobody could predict how long this takes.

“Now that we have measured the rate, for at least one system – it’s millions of years – we have a new clue about the behaviour of stars as fluid bodies.”

As WASP-12b orbits its star, the celestial bodies gravitationally pull at each other, causing the star to oscillate and distort.

The resulting friction over a long time converts the planet’s orbital energy into heat within WASP-12b.

This cosmic phenomena also exerts a gravitational torque on the planet, causing the planet to spiral inward.

The process provides astronomers clues about the interior of the star by measuring the rate at which the planet’s orbit shrinks.

Samuel Yee, first author and a graduate student in astrophysical sciences, said: “If we can find more planets like WASP-12b whose orbits are decaying, we’ll be able to learn about the evolution and eventual fate of exoplanetary systems.

“Although this phenomenon has been predicted for close-in giant planets like WASP-12b in the past, this is the first time we have caught this process in action.”

One of the first astrophysics to predict this process was Frederic Rasio, Professor of Physics and Astronomy at Northwestern University, who was not involved in the Princeton University study.