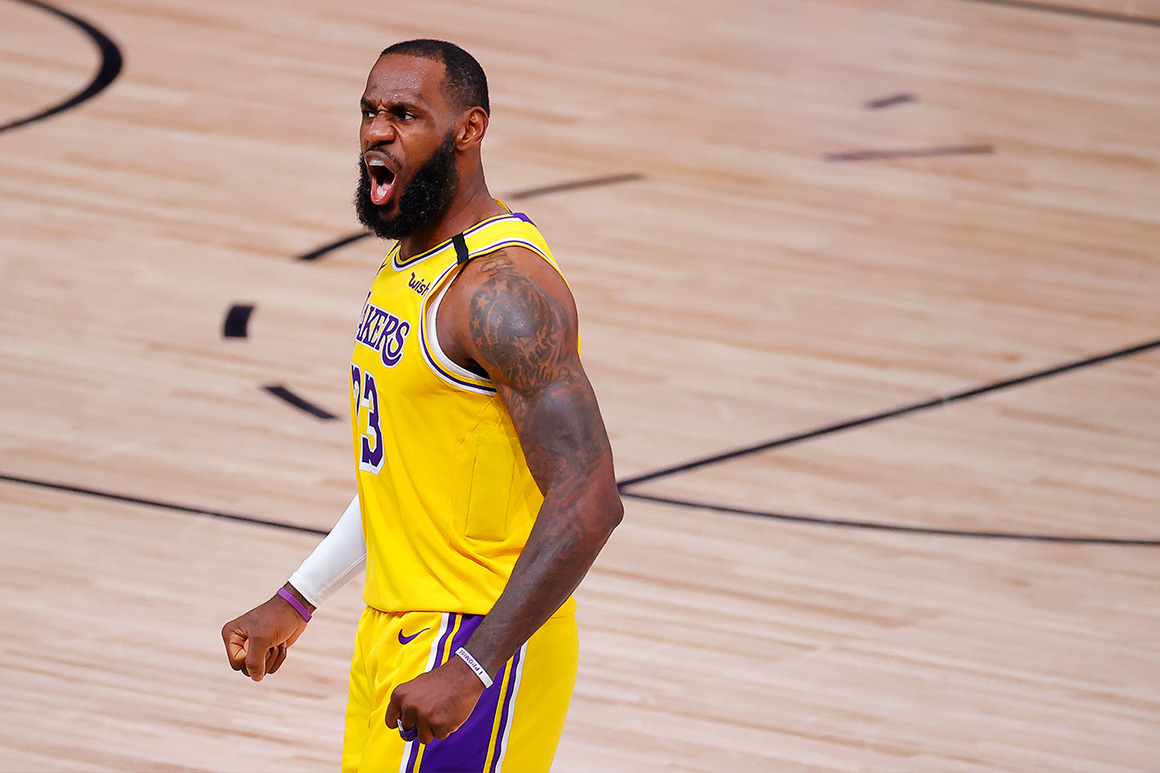 Such measures aren’t just PR sops meant to placate the “shut up and dribble” crowd. The world of sports broadcasting is notoriously gun-shy when it comes to politics — even when those expressions of political belief are symbolic rather than electoral. All of which makes what NBA players have accomplished here unprecedented.

As the coronavirus pandemic and voter suppression tactics threaten to depress turnout in the very cities across America that have been rocked by the violence and injustice, the NBA will expand voting access and participation. The stadiums that will double as polling stations aren’t just in safely blue states, they’re in places with down-ballot and Electoral College ramifications—Michigan, Pennsylvania, Ohio, Wisconsin, Arizona, Texas, North Carolina, Georgia.

In light of the strike’s shocking nature and its just-as-shockingly quick resolution, it’s easy to miss the elegant genius of what it accomplished. For all their carping about voter fraud, Trump and his Greek chorus in conservative media are hard-pressed to argue against measures to promote in-person voting. Or, now that players are back on the court, to complain about spoiled millionaires hypocritically shirking their duties while the poor, average fan suffers through quarantine with nothing to keep them company but Formula 1 on tape delay.

The NBA playoffs resumed seamlessly this week, but the decision wasn’t without its critics on the left—specifically with regard to the influence of Barack Obama, the Bernie-verse’s bugbear of perceived half-stepping. When the news broke that Obama counseled players to return to the court with concessions, responses ranged from “are you fucking kidding me” to jokes about Larry Summers and Richard Branson to the evergreen, sarcastic “thanks obama.”

The snark elides how the NBA throwing its weight behind voting access could have a huge impact on this fall’s elections—and, therefore, the near-future not only of criminal justice reform, but of any number of longtime progressive priorities. In 2018, unprecedented midterm turnout led to a slew of liberal reformers winning office up and down the ballot, even in places not usually known for their progressive zeal. Take Houston, where Harris County Judge Lina Hidalgo led a wave of Democrats who swept Republicans out of the county’s courts and are now remaking its criminal justice system in their own image. Or Nevada, where its attorney general, Aaron Ford, has pushed for greater state oversight of local police.

Black voters who bear the brunt of America’s dysfunctional criminal justice system are more wary than their White counterparts of voting by mail, potentially hampering such initiatives in a pandemic-constrained election cycle. Critics of Obama-style electoralism fixate on the first part of the former president’s famous “Don’t boo, vote” exhortation, painting him as a counter-revolutionary wet blanket. On behalf of their communities, the striking NBA players put their money—quite literally—on the latter part, bending league ownership to their will in what could be a game-changing twist in this November’s elections.

Even before the current state of affairs forced the league’s biggest star to dial up a former president for counsel, LeBron James heralded a new wave of NBA activism with the founding of the “More Than a Vote” nonprofit in the wake of George Floyd’s killing in late May. The group’s explicitly stated goal was to combat apathy among Black voters, something experts say has been instilled by years of anti-democratic measures to suppress voter access.

Hannah Klain, a fellow at the Brennan Center for Justice, described the measures as promising after nearly a decade of renewed voter suppression efforts.

“It’s exciting as someone who works in this field to see people who maybe in the past, haven’t been as engaged, get really fired up about elections, and administering them faithfully, and having people vote,” Klain said. “The ennui and the disillusionment are the point [of voter suppression]; they’re counting on people to lose faith in the system.”

So far, James’ A-team assembled to fight said ennui includes stars like Super Bowl champion Patrick Mahomes, comedian and movie star Kevin Hart, and R&B singer Toni Braxton. But despite their combined followings and the wealth of evidence showing how inner-city voters are discouraged from going to the polls, an obvious, Occam’s razor-style question lingers: Will the celebrities’ do-gooding messages aimed at boosting participation actually … do any good?

In the late 1990s, Yale political scientists Alan Garber and Donald Green decided to test a simple thesis about the tools of the political Stone Age. Were the then-standard contents of a campaign’s bag of tricks, namely direct mail and phone campaigns, really effective in getting voters to the polls? Analyzing voters in four groups that each received nonpartisan “nudges” of escalating intensity, they found that among all the tools available to political operatives at the time, only old-fashioned in-person canvassing had any effect on likeliness to vote.

Pols seized on the findings immediately, whispering in campaigns’ ears that they were wasting money on outdated tech when they could be marching merrily into a broadcast- and email-dominated future. In 2008, Green and UCLA’s Lynn Vavreck published an oft-cited study in the academic journal Political Analysis that measured the effectiveness of America’s most well-known and frequently-mocked get-out-the-vote effort of the modern era: MTV’s “Rock the Vote” campaign aimed at young voters.

Green and Vavreck analyzed the effect of such ads during the 2004 presidential election, finding that where they aired, young voters were more likely to turn out by 2.7 percentage points. Crucially, Green himself recently told Vox that such ads are effective only when they’re focused specifically on turnout, without a partisan message—exactly like those NBA viewers will experience until the last game of its playoffs in mid-October.

James Druckman, a political scientist at Northwestern University who has studied voter behavior and psychology extensively, pointed to “Rock the Vote” as the closest comparison to the NBA’s current efforts. He cautioned, however, that like so many other aspects of politics, the hyperpartisan nature of today’s media climate could blunt those efforts’ cumulative effect.

“I suspect that if people still perceive there to be nonpartisan actors who engage in mobilization, that these methods would work during this election cycle,” Druckman said. “The question is the extent to which people believe anyone involved in politics is not politicized these days.”

In that light, then, a higher-percentage play might be the NBA’s commitment to materially expanding voting access for residents of the league’s 30 cities, most of which trend poorer and blacker, and are more vulnerable to the violence players are protesting than their surrounding areas. (The Toronto Raptors are lobbying to help U.S. expats vote absentee.) As of this writing, The Associated Press reports that at least 20 teams have already announced concrete plans to set up voting centers at their arenas. Depending on the state, voters will be able to potentially vote early, register to vote or actually vote at those arenas on Election Day.

Klain said those efforts are promising, but that team owners and league officials should prepare for a heavy bureaucratic lift.

“I’ve been both sort of excited and, frankly, nervous, because running any polling place is complicated,” Klain said. “Particularly this year, we’re expecting really high turnout across the board, and making sure that these spaces … are ready to handle that kind of volume will be so critical.”

As Druckman alluded to, the ads meant to drive voters to those spaces don’t explicitly point them left or right. They’re thoroughly nonpartisan and pro-small ”d” democracy, which makes them palatable to otherwise skittish team owners. But the young, policy-motivated voters who have helped drive progressive reforms across the country are surely paying attention to races like the ones listed above, and the NBA’s pro-Black Lives Matter messaging is thoroughly aligned with them. If those voters can be nudged even by Green and Vavreck’s 2.7 percent, it could have major ramifications.

All of this isn’t to uncritically cheerlead for the NBA. Opinions within the league on its return to play were reportedly so divergent that they encompassed those of the eventual deal’s anti-electoralist critics, and NBA leadership has a history of ditching its social justice rhetoric when it might jeopardize the bottom line. But real money and pride were at stake in these negotiations; the season’s total cancellation would have materially harmed arena staff and all-stars alike. Whether or not you agree with the players’ goals, their sincerity in this case cannot be questioned.

So laugh at Obama (and by proxy, it should be noted, James and his collaborators) all you want. It only takes a glance out the window to observe that Americans of all stripes are energized—honestly, inflamed—as much as they have been since the civil rights era. Obama, James and their fellow leaders are fully aware of that, and they’re prepared to leverage it toward their goals.

The election season, then, can be compared to “crunch time” in the NBA, the last few minutes in a tight game, when every move counts and the record books are settled. Whatever happens this November, NBA players’ pro-democracy activism will ensure that they and their followers will at least be on the court for it, while their detractors sullenly look on from the bench.

CORRECTION: Jacob Blake was shot by Kenosha police but not killed.