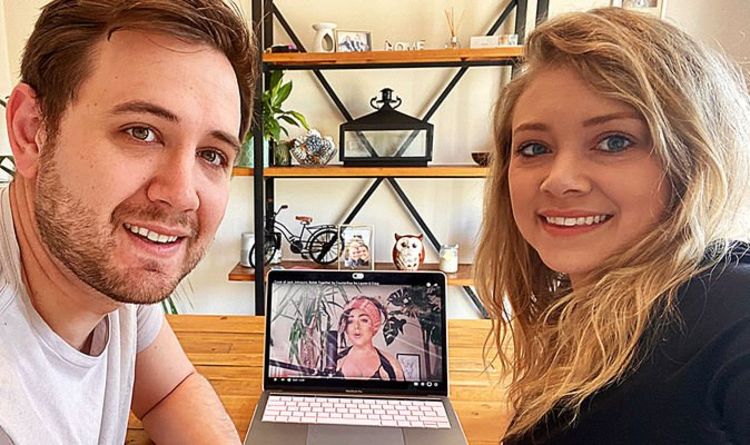 After a six-year romance Lauren Overy and Craig Bennett from Ashford in Kent, got engaged in the beautiful surroundings of Koh Samui in Thailand. But after more than two years planning their dream wedding they had the heart-breaking realisation that they would have to postpone the big event due to the ongoing global pandemic. Lauren said: “The lead up to our day became harder and harder and the excitement disappeared when we started getting news that there would be restrictions on mass gatherings.

“So our wedding date had to be postponed.

“All of our suppliers have been amazing in allowing us to change dates and highly supportive throughout this process easing some of the stress.”

As the day arrived the couple found it a struggle to keep themselves in high spirits.

Craig said: “On Saturday we found ourselves clock watching, saying to each other we would be married by now but we tried staying positive for each other.”

But later that evening an email with a Youtube link arrived in their inbox.

Lauren said: “Just before the time where it would have been our first dance we received an email from our wedding band Counterflow.

“Within that email was the nicest message saying that they had a surprise for us.

“What followed was incredible, to see the band in their own homes and composing our first dance song really touched us, we even shared an emotional dance in the front room.”

The band, based in London, include singer Talia, drummer Charley, Simon on guitar, bassist Jason and Andreas on keyboards.

They decided to record the rendition of Jack Johnson’s ‘Better Together’ from their own homes and create the video to send to the couple.

Talia said: “It’s been tough for lots of people in many ways during these strange times and we felt it would be a lovely thing to make sure Lauren and Craig had something to smile about on what must have been a difficult day for them.

“Fittingly the song title ‘Better Together’ really resonates with lots of people who want to be closer to loved ones at the moment.”

The couple were overwhelmed with the gesture. Lauren said: ‘Kindness really does go a long way, and even though everyone is experiencing change and unsettling times, Counterflow still managed to think of us! What they did gave our families and ourselves goosebumps!

“We saw Counterflow live in London a few years ago and we both turned to each other and said they are going to be our wedding band one day, although our wedding is not quite here, Counterflow gave us a perfect moment on a very strange day.”