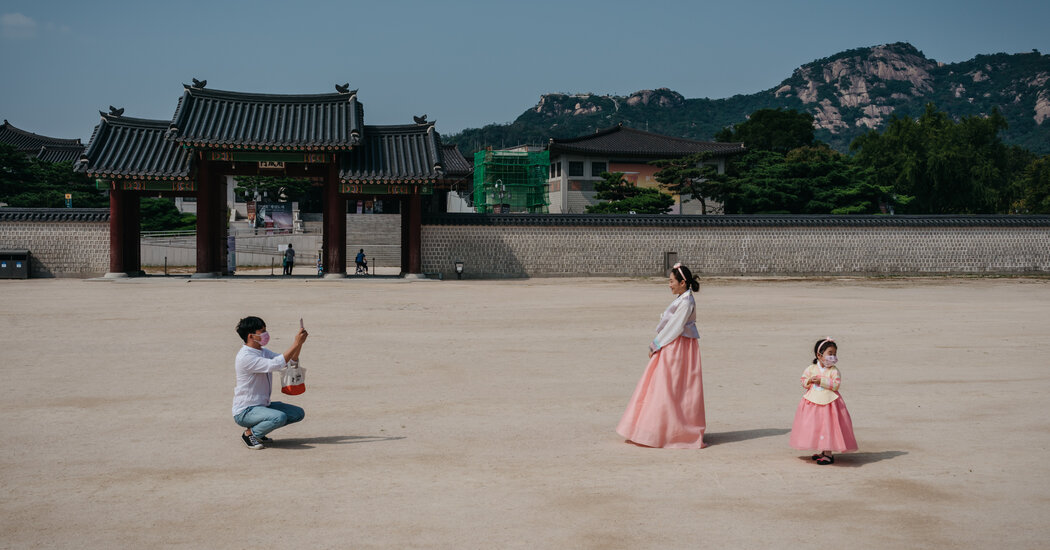 SEOUL, South Korea — Once a year for the past three decades, the Joo brothers have traveled back to their hometown from South Korea’s capital to mark the Chuseok holiday.

They drive from Seoul with their respective families, foregoing a bullet train that would cut the journey in half, with car trunks full of presents. And they always save room for the giant meal that they eat with their parents to mark Chuseok, the rough Korean equivalent of Thanksgiving.

This year, the government has asked South Koreans to stay home during Chuseok, which runs through the weekend, to avoid exacerbating the country’s latest coronavirus outbreak.

Many South Koreans, including the Joo family, have grudgingly followed orders, but their acquiescence comes with an emotional price: A normally joyful time of year now feels empty of its sacred rituals, and clouded with feelings of anxiety and disorientation.

“Watching my parents grow older and change often worries me, but seeing them in person puts my mind at ease again,” said Joo Jae-wook, 57, a retired salesman and the oldest of four brothers, one of whom still lives close to home. “But this year I can’t even do that.”

Chuseok falls on the nearest full moon to the fall equinox, known as a harvest moon. It is also celebrated in North Korea, albeit without the Thanksgiving-like holiday travel rush that precedes the version in the South.

The holiday has deep links to South Korea’s agricultural past and its custom of ancestor worship. Most families returning to their hometowns — usually that of the husband or father, though the tradition is evolving — visit graveyards and tidy their ancestors’ tombs. They also set out fruit on picnic mats as ritual offerings, exchange presents and gather to make songpyeon, a special rice cake that symbolizes familial bonds.

“For people in my generation, Chuseok means family and comfort,” Mr. Joo said. “We renew our sense of community and belonging by getting together and catching up with relatives.”

During a normal Chuseok, South Korea’s roads and public transit system strain to accommodate all the people who are rushing back from cities to their hometowns. Train tickets sell out well in advance.

But this year, trains are leaving stations half empty because of social distancing restrictions. Passengers are buying seats at the last minute with relative ease.

South Korea has reported 415 deaths and more than 23,000 coronavirus infections since the pandemic began, including more than 500 new cases in the past week. The country’s response has been widely praised as a model, but a recent outbreak that began in Seoul has tested the government’s strategy of using social-distancing restrictions and extensive tracking to keep the virus at bay without shutting down the economy.

On Wednesday, President Moon Jae-in told the nation that South Korea’s people were observing Chuseok at a “difficult time,” and their sacrifices would be rewarded. “The government will surely repay the people who have endured the difficulties by succeeding in controlling the virus and protecting the economy,” he said.

That offered little comfort to Choi Jee-woong, a freelance M.C. in Gangnam, a well-heeled Seoul district.

Mr. Choi, 39, and his parents normally spend Chuseok in South Jeolla province, where his father grew up. But they’re skipping the trip this year because his mother is unwell, he said, and he plans to spend the holiday watching Netflix.

“It feels pretty desolate these days,” Mr. Choi said, sitting on a bench outside a cafe. “I’m an active and social person, but some kind of emotional barrier has gone up among us.”

Mr. Joo, the retired salesman, said that he and his wife normally spend Chuseok shuttling between the southern city of Gwangju, where his parents live, and her parents’ home in nearby Sunchang County.

Two weeks ago, his parents instructed him not to come this year, citing the government’s advice.

He agreed, but it didn’t quell his lingering anxiety about the pandemic and its grinding restrictions.

“If there was a set timeline, people would feel more hopeful,” said Mr. Joo, who lives in a quiet residential neighborhood. “But I’m scared because we don’t know if there will ever be an end to this.”

Mr. Joo said that the family will miss the stories that his father tells about growing up under Japanese occupation in a part of northeast China then known as Manchuria, and of the hardships of life in South Korea during the late 1950s.

The couple’s daughter, Joo Hyena, 26, said that many young people in South Korea feel as though the pandemic has left them “abandoned and thrown onto the floor.”

“For people seeking jobs or those who were just hired for the first time, the start to their career has not been what they ever wanted or imagined,” said Ms. Joo, who recently quit her job at a multinational cosmetics company.

As for Chuseok, she said, young people often find it tedious because relatives often ask intrusive questions about their careers and relationships.

But Ms. Joo added that the holiday has a “bright energy” that tends to bring people together. Some of her fondest memories, she said, are of riding through rice and pepper fields in the early autumn, on the back of her late maternal grandfather’s motorbike.

“It used to make us feel more whole and generous, putting time and effort into preparing food and gifts for one another, as others might feel at Christmas,” Ms. Joo said of Chuseok celebrations past. “But this year things are fragmented, and the streets seem lonesome.”