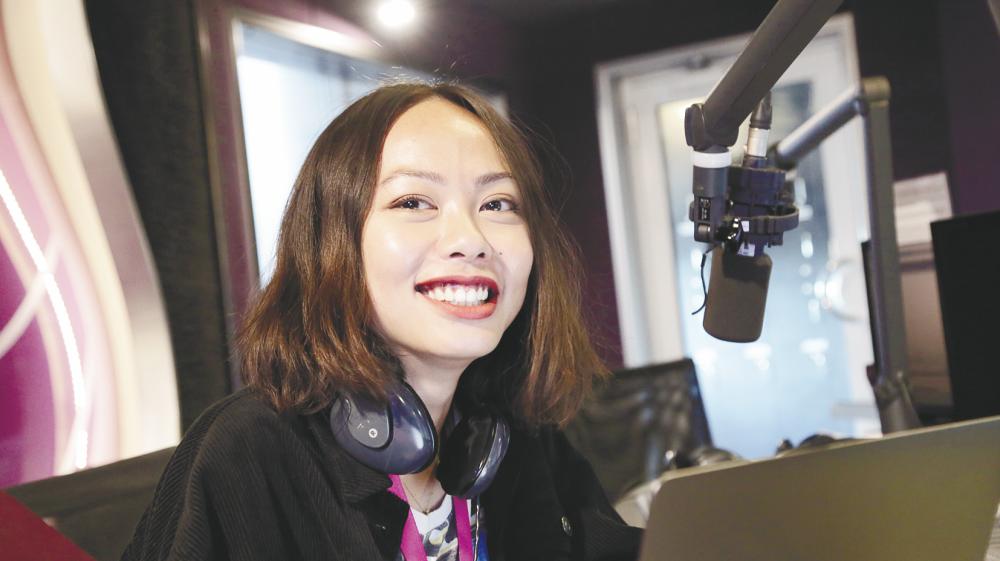 TALL and willowy, with a big smile to match, TV and radio presenter Tham Zher Peen or Zher Peen has been a part of the Malaysian entertainment landscape since 2009.

From hosting short entertainment segments such as 8TV’s Quickie and travel show Hoods to becoming a content developer for highly successful shows such as 5 Rencah 5 Rasa, Zher has made her mark in different ways.

However, for most of her career Zher has been known mainly as a radio presenter, getting her start on Fly FM, up to her current status as an announcer with Hitz.fm’s Drive (3pm to 8pm).

“I love both [radio and TV] equally. With the trends now in the English market … English content creators are creating more content online.”

She has helped develop content for PrimeWorks, and among the more noteworthy series she was involved in aside from the highly popular 5 Rencah 5 Rasa was Back to the Streets, in which she teamed up with Chef Malcolm Goh.

A huge fan of the late Anthony Bourdain, Zher is naturally influenced by him.

“I am still developing content for myself these days. I host a travel show on YouTube called Local Eyes, it is basically travelling to places and seeing them through the eyes of a local. It is a passion project,” said Zher, who used her experience as a content developer and also producer to bring this show to life.

“I put everything I learned into this. It is an experiment to see if I can write and direct a travelogue series.”

People who have watched Local Eyes note that this three part series reminded them of Bourdain’s works.

Zher is unperturbed by this comparison because “very often content creators emulate their heroes before they eventually find their voice. I am in this space where I am still discovering and honing my own voice. Hopefully that will be the next step, developing something other than what I have done before, and selling it to bigger platforms.”

She says she can’t help herself when it comes to creating content, whether it is for radio or social media or television. She has no idea what the future holds, but she is definitely sure she will still be creating content and pushing it out.

Zher said that she loves lifestyle and travel content, cooking and eating.

“The dream is to eventually sell my own content. With 5 Rencah 5 Rasa, I conceptualised the format and worked with producers. My dream would be to push my own content and have it aired on bigger platforms like Netflix, Astro Go or iflix.”

If you look at Zher’s Instagram photos you get the impression that she is an outdoorsy person.

“I am an outdoor person. I love nature. I love the beach, which is where I feel my soul belongs. But many people will be surprised to learn that I am an introvert. I really enjoy my time alone, my quiet time.

“I am surprised that during this movement control order (MCO), I find myself very occupied. Whether it is Tik Tok, Instagram or watching things on YouTube for recipes I want to cook, doing research for my work, wrapping up video content for my work, or whether someone wants to Zoom with me to catch up, I find that I have to make time to watch that movie I want to watch. It is a weird thing. I thought I would have more free time.”

On Hitz.fm, Zher dedicates one hour on Drive every Friday for a segment called ‘Fresh Hits on Friday’ in which she plays the newest releases of the week.

“It is something that happened when I joined. I feature artistes that Malaysians should know about even though they are not big commercially. It is music you already love, music you should love, and music you will love.”

On the radio, the presenters seldom have any say in the music they play, as it is usually selected by the music director. Songs with commercial appeal tend to take precedence. With this show, Zher is given some autonomy to curate the music she plays.

“I am very proud to say I played Lizzo on Hitz.fm even before Lizzo was a thing. It was because I came across a song of hers from 2017 called Truth Hurts.

“I decided to take a chance to play the song that was three years old and within a week it was number one in the US,” said Zher, happy with her “little victory” in showcasing an artiste who erupted on the charts soon after.

ByIn response to her post, one user wrote: “I hope you mean out and about and not 'on the road’.” Clarifying the context, she replied:...
Read more