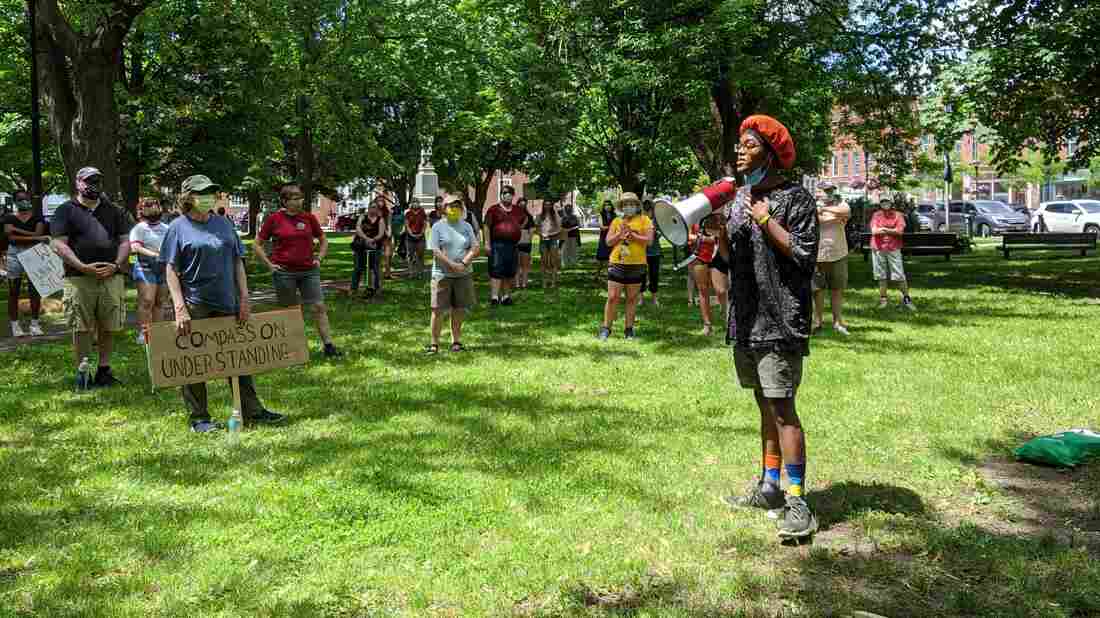 Mal Brewster, a local college student, speaks about his experiences with racism during a vigil in Canton, N.Y., on Saturday. Julia Ritchey/NCPR hide caption 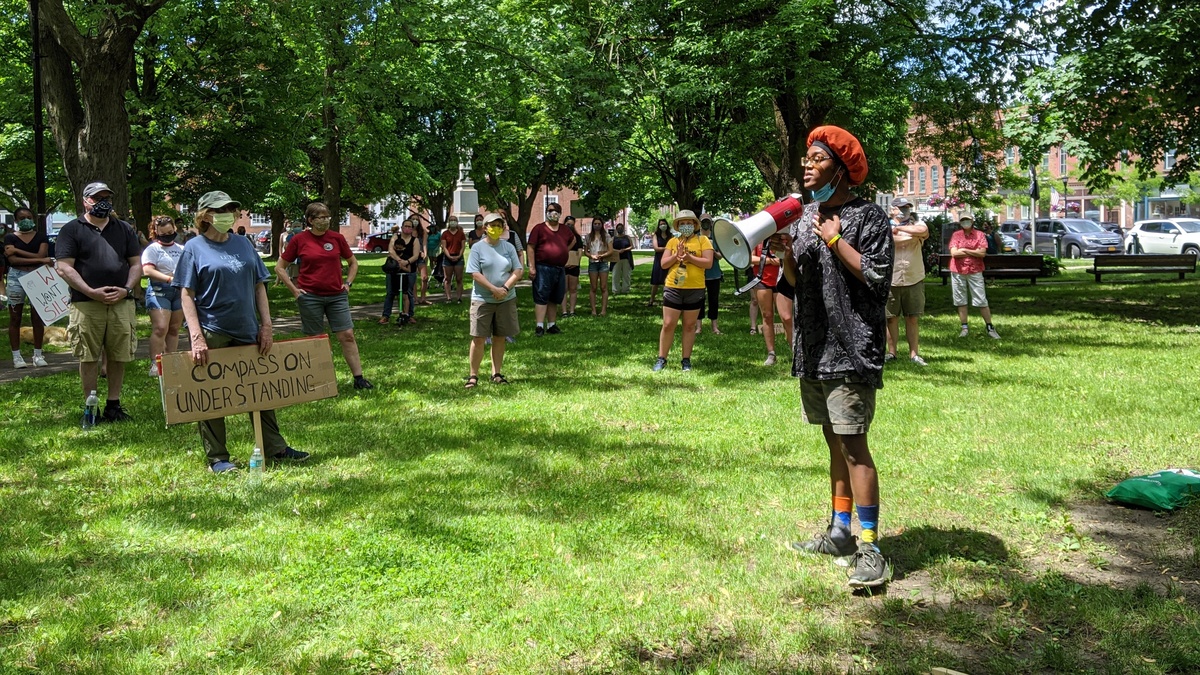 Mal Brewster, a local college student, speaks about his experiences with racism during a vigil in Canton, N.Y., on Saturday.

Crowds gathered in the northern New York village of Canton, population 6,400, on Saturday for a vigil honoring black lives lost to police brutality.

The gathering in the village near the Canadian border was one of several taking place this weekend in smaller, more rural towns scattered across New York, reflecting how widespread protests have become outside of major cities. Another march held in Plattsburgh, about 100 miles east of Canton, drew several hundred more, while about 75 others also gathered south of Plattsburgh in the town of Westport.

Organizers of the Canton gathering asked attendees to kneel on the village green as church bells rang for nine minutes, the length of time a white Minneapolis police officer knelt on the neck of George Floyd before he died.

“Our discomfort is but a fraction of the pain,” said Teresa Veramendi after the bells had stopped ringing.

Veramendi works as the social justice coordinator at the Unitarian Universalist Church of Canton, which for several days has been ringing its bells to honor George Floyd and other black lives lost to police brutality.

Speakers at Saturday’s vigil also read out the names and manner of deaths of several black people either killed by police or during a racist altercation.

Mal Brewster just finished his freshman year at SUNY Potsdam, a local university, and shared his own experiences as a black student in northern New York.

“I’ve been to a couple of different frat parties, and there’s been a couple of people that — one too many drinks — and they think it’s comfortable to say the N-word,” he said. “Me being outnumbered, if I say something, I’ve been told I’m starting a problem.”

Canton is the county seat of St. Lawrence County, one of the most rural in the state. Its population is also overwhelmingly white at about 94%. Black residents make up just 2.6% of its demographics. 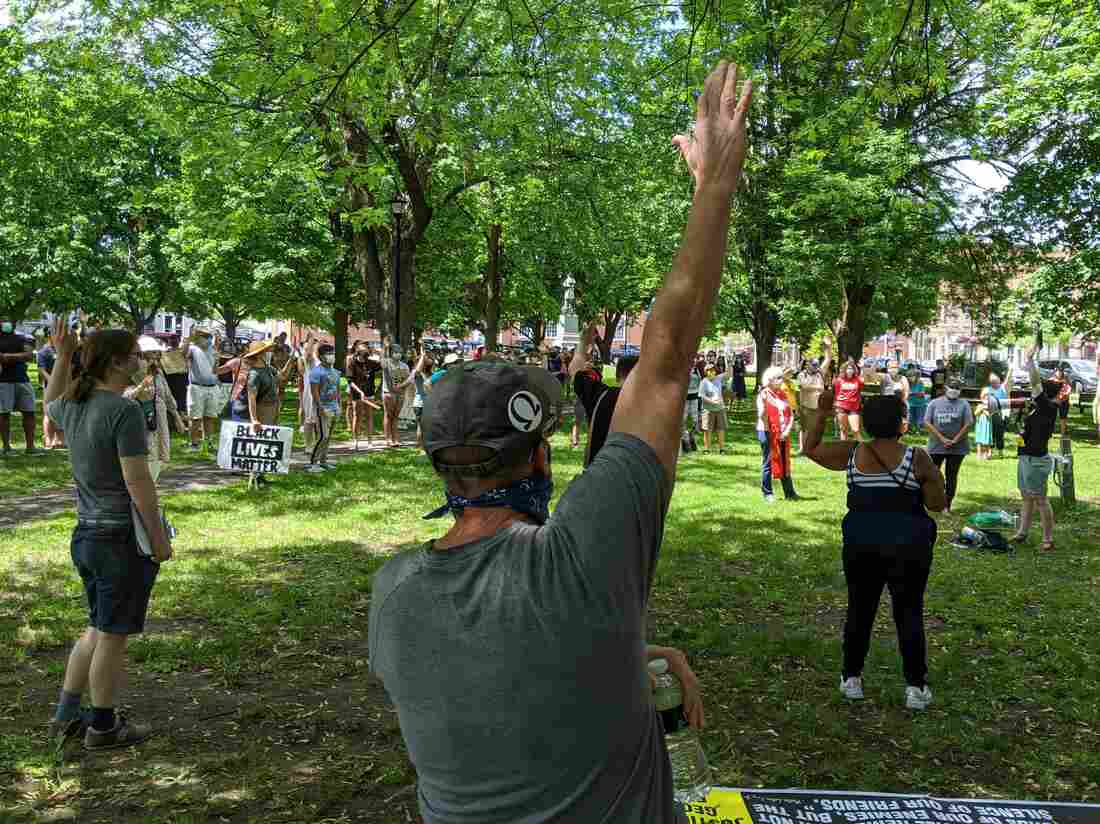 Hands shoot up after a speaker asks if people have ever heard someone say something racist but done nothing about it at a rally in Canton, N.Y. Saturday. Julia Ritchey/NCPR hide caption 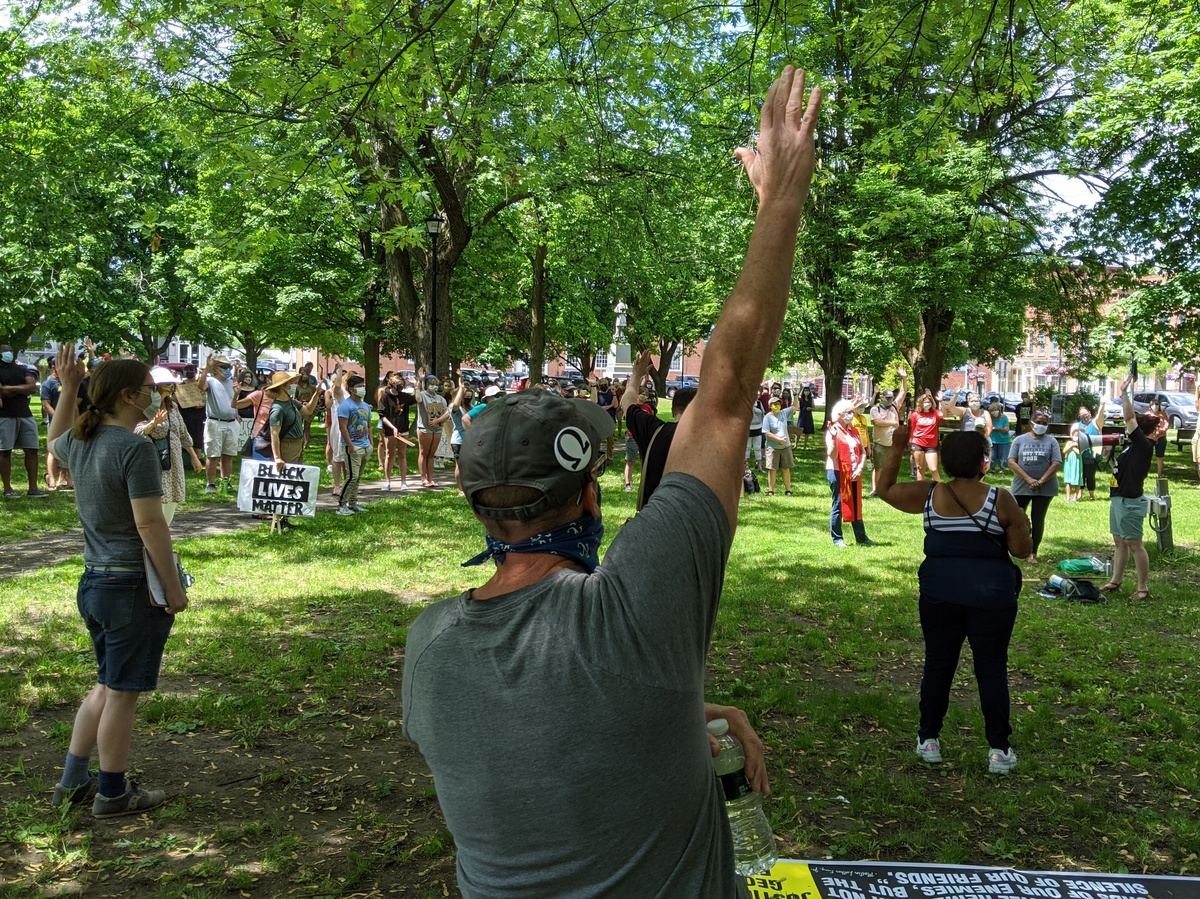 Hands shoot up after a speaker asks if people have ever heard someone say something racist but done nothing about it at a rally in Canton, N.Y. Saturday.

New York City and other major metropolitan cities continue to attract thousands of protesters and a large portion of media coverage, but smaller protests are popping up everywhere. BuzzFeed reporter Anne Helen Petersen has been aggregating a thread of these protests, noting they “cut across demographics and geographic spaces.”

Canton is the home of a small private university and although its politics lean Democratic, the county as a whole has been trending more conservative, voting for President Trump in 2016.

Michael Welch, a retired mail carrier, was driving by when he decided to stop and join the vigil. He said he remembers some protests taking place after the police shooting of Michael Brown in Ferguson, Mo., but “not nearly this size.”