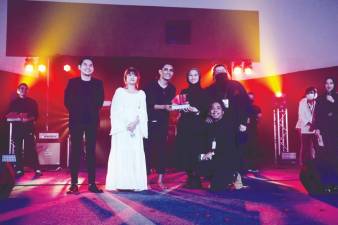 Penawar was crowned as the champion of Anugerah Lagu Indie (ALI2020) during the final stage that was screened from Spacerubix, Puchong on Oct 2. The song that was popularised by Margosa beat Mesra by Nusarasa and Menunggu by Orkes A Hizadin and Ainina Hasnul.

The previous stages saw 13 of the best songs beating 22 others to enter the final stage of ALI2020.

“Anugerah Lagu Indie isn’t a music award based on popularity, but rather quality, which is an important criteria. However, ALI2020 also introduced Anugerah Lagu Popular and Carta Indie Kita as side awards,” said Ekzan.

That said, both awards were nabbed by Sekumpulan Orang Gila and Shila Amzah’s Pelukan Angkasa.

“Indie isn’t a ‘genre’. The message that we want to bring through ALI2020 is ‘music is for everyone’, where we are able to prove that indie songs can also be enjoyed by everyone and is not exclusive to just the indie community,” said Rakita CEO Faris Amir.

With the multitude of genres that were presented by each group and singer during the finals of ALI2020, the existence of Anugerah Lagu Indie has given the chance to ready a platform for indie songs to receive the same amount of attention and validation as mainstream songs.