Cruise: Riskiest time to go on a cruise revealed – how can you avoid catching a virus? 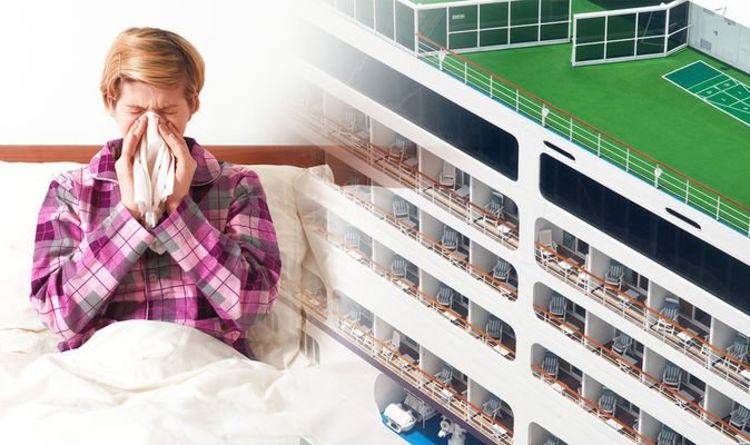 Cruise holidays have hit the headlines in recent weeks after several ships were forced to quarantine passengers amid coronavirus fears. Cruises see passengers exposed to new environments and high volumes of people which can increase the risk of illness. This can create the risk for sickness from contaminated food or water or through person-to-person contact. So, how can you make sure you don’t get sick on a cruise?

According to research by The Independent, winter is the riskiest time to take a cruise when it comes to getting ill.

The news site analysed 118 serious virus outbreaks on cruise ships over the past decade as recorded by the US Centers of Disease Control (CDC).

The data examined showed that there was one month that had more virus outbreaks than any other.

The riskiest month to cruise in the northern hemisphere, according to the figures, was January – there were 19 outbreaks occurring between 2010 and 2019 in the first month of the year.

February was a close second with 18 outbreaks followed by March and April with 15 each.

As for the early winter months, November had 12 outbreaks and December 10  – all of which were above average.

Statistics showed that during the warmer months, from May to October, outbreaks were all in single figures.

READ MORE: Coronavirus symptoms: How do you know if someone has the virus?

So why are cruise passengers more likely to get sick during the winter?

“The winter season is the time of year when we have more respiratory infections,” Dr William Schaffner, an infectious disease expert at the Vanderbilt University in Tennessee,  USA, told Healthline.

There are two reasons such infections are spread more readily during winter.

The first is a matter of proximity. “We spend more time in enclosed spaces, close to each other so that we have more prolonged face-to-face contact,” said Dr Schaffner.

Humidity is the second culprit. “When we transmit viruses from one person to another, we’re usually three feet [from] each other — the so-called ‘breathing zone,’” explained Dr Schaffner.

“When we’re in a time of low humidity such as we have in the wintertime, it appears that that little bit of moisture that surrounds the virus evaporates, so the virus remains in the air for a sufficiently prolonged time so that the person who is sufficiently close to me can breathe it in.”

As for gastrointestinal illnesses, norovirus is a stomach bug that causes vomiting and diarrhoea, and while it can occur at any time of year, it tends to be more common in the winter months.

“In the winter our immune system may be weaker,” explained Dr Daniel Quemby to Express.co.uk.

This is due to shorter days and lack of sunlight which can lead to low levels of vitamin D and melatonin.

“All crew are extensively trained on how to help keep ships, guests and crew sanitised. Ships are visited by the Vessel Sanitation Programme (VSP) who conduct public health inspections on how well cruise ships meet health standards in the VSP operations manual.

“Furthermore, CLIA cruise lines are well-equipped and experienced in maintaining health surveillance of passengers and crew.

“CLIA cruise lines take precautions to conduct screenings of passengers and crew for illness prior to boarding and are required to implement outbreak prevention and response measures.

“Ships must be fitted with medical facilities and shipboard medical professionals available around the clock, 24/7, to provide initial medical care in the event of illness and to help prevent disease transmission.”

A Carnival Cruise Line spokesman added: “If an outbreak does occur on a ship, there is a greater ability to control an outspread because of the training of the crew and the cleansing and disinfection protocols in put in place on the ship, as well as the ability to better control the surrounding environment on a ship.

“Typically, if an outbreaks occurs on a ship while at sea, I generally find that very few, if any, on the cruise remain ill by the time the ship completed its journey because of the successful protocols put into place and the swift action of the medical team and the crew members, in coordination with the guests who also play an important role such as washing their hands regularly with soap and water and using sanitisers.