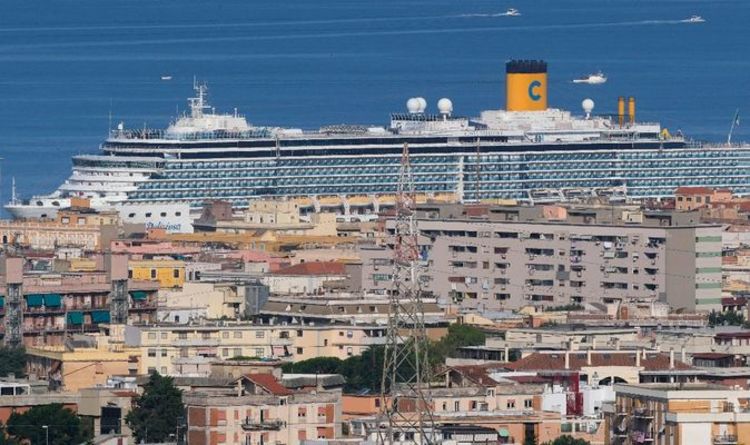 The Costa Favolosa also has a positive case among the crew – another member who hails from the Philippines.

He is understood to have already under mandatory isolation when he joined the ship.

The rest of the crew on the ship are now under quarantine.

According to local newspaper Il Fatto Quotidiano, until recently, the crew on both ships could go ashore in Civitavecchia two hours every day.

However, they are now prohibited from leaving until all staff are checked.

A Costa spokesperson told Express.co.uk: “Following the news regarding the positivity of three members of Costa Crociere’s crew, the Company wishes to inform that, at present, two of them – recruited on board Costa Deliziosa – are in good general health conditions and receiving care in local hospitals. A third one – part of Costa Favolosa’s crew – is in isolation on board the ship, and is also in good health.

“The reactiveness of the Company in intercepting the positivity of these three cases and promptly responding to the specific situation, is the result of rigorous safety protocols set in place by Costa Crociere, which have bene further strengthened in view of the possible restart of its cruises, as soon as the Italian Government will provide  the necessary authorization. The procedures developed by Costa Crociere include scrupulous screening for each crew member, well before boarding the destination ship.

“Each seafarer is – in fact – subject to a series of health tests in his country of origin, hosted in dedicated structures, and is subject to a further swab test before traveling to Italy.

“Upon arrival in Italy, a second swab test is carried out and all staff members observe a two-week period of constant health monitoring. Only after obtaining the negative resulfs to all these exams is the crew member deemed suitable for on-board activities. Moreover, after boarding, the general health situation is constantly monitored, thanks to swabs tests performed periodically on all staff members.

“All procedures are appropriately agreed upon in coordination with local health authorities. In agreement with the latter, Costa Crociere will continue to carry out the appropriate health investigations also in the upcoming days in order to keep the situation constantly under scrutiny. For Costa Crociere the safety of its crew is an absolute priority.”

Hurtigruten CEO Daniel Skjeldam said in a statement today: “We are now focusing all available efforts in taking care of our guests and colleagues.

“We are working closely with the Norwegian National and Local Health Authorities for follow-up, information, further testing, and infection tracking,” says CEO in Hurtigruten, Daniel Skjeldam.

“In light of the recent increase in new cases of COVID-19 globally, the only responsible choice is to suspend all expedition sailings until we are absolutely confident, we can carry out our operations in line with all requirements from the Authorities and with the even stricter requirements we have set for ourselves.”

Today Hurtigruten began the process of reaching out to and informing guests booked on the now cancelled voyages.

The decision has no impact on Hurtigruten’s coastal Norway operations.

A coronavirus case has also been reported onboard the Paul Gauguin ship in French Polynesia.