Cubitt-Shand tiara: The only diadem Camilla Duchess of Cornwall inherited from her family 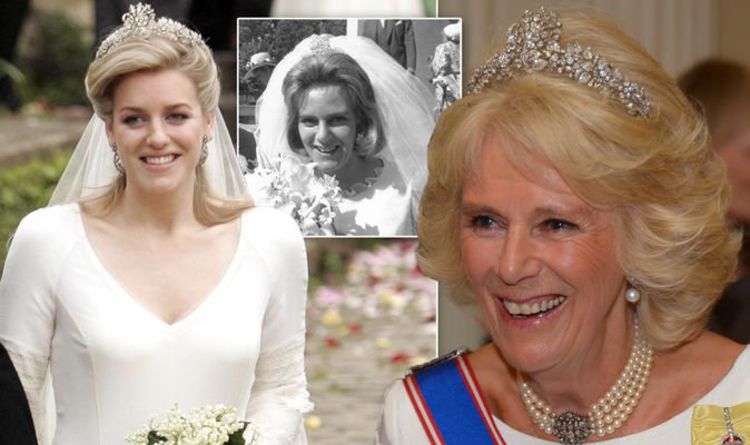 The Keppel’s had their own royal links, as Sonia’s mother was Alice Keppel – the last mistress of King Edward VII, Queen Elizabeth’s great-grandfather.

The tiara gets its moniker from Camilla’s grandfather, the Hon. Roland Cubitt, and her father, Major Bruce Shand.

Sonia lent Camilla the tiara for her 1973 wedding to Andrew Parker Bowles, and it can be seen in photographs of the day.

Made completely of diamonds, this peice features flower designs nestled in a thick wreath of leaves.

It is likely to have also been worn as a necklace originally, as the tell-tale centre apex implies.

When Prince Charles becomes King, Camilla will have access to the jewellery which belongs to the Crown, currently worn by Queen Elizabeth.

This includes a number of tiaras – but it is unlikely she will stop wearing her own personal sparkler, the Cubitt-Shand.

Some tiaras have formed part of iconic moments in the history of the Royal Family. The Cartier Halo for instance, was worn by Kate Middleton on her wedding day to Prince William in 2011.

Similarly, the Meander tiara was admired around the world thanks to it being the choice of Zara Phillips for her wedding to Mike Tindall in 2011.

And it is the Lover’s Knot that is most often seen today, as it is a favourite of the Duchess of Cambridge.

It was closely associated with Diana, Princess of Wales during her marriage to Prince Charles, so holds special significance for Kate.

ByThis may be a tempting idea to stop drivers becoming cold while behind the wheel but can lead to vehicles being stolen in a...
Read more
Lifestyle

ByThose who are driving their vehicles in a safe manner and within speed limits will pay less than those who are found to drive...
Read more
Lifestyle