Cuomo evokes Trump in war with Schumer over coronavirus funding 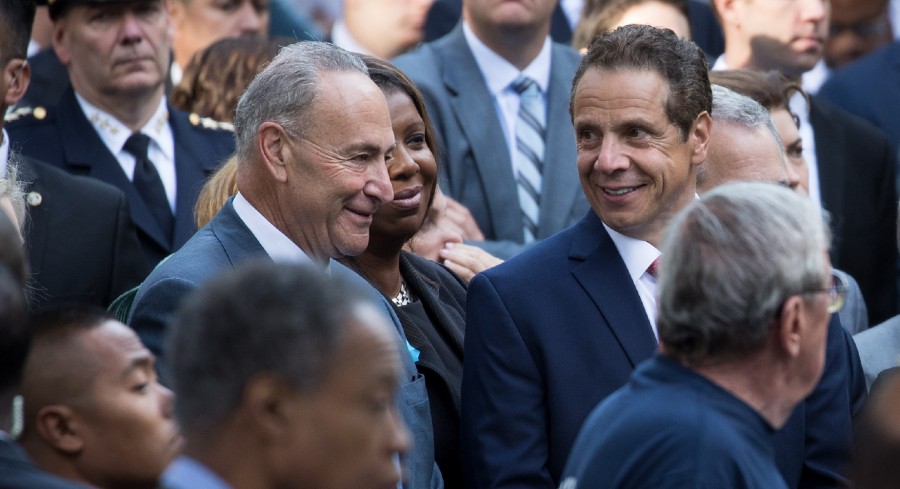 NEW YORK — In the chaotic scramble of New York politics in the age of coronavirus, Democratic Gov. Andrew Cuomo is evoking none other than Republican President Donald Trump in his public distaste for New York’s other top Democrat: Sen. Chuck Schumer.

The decadeslong Cuomo and Schumer relationship has never been noteworthy for its warmth. But they’re like-minded politicians representing the same state, and when Cuomo speaks of New York’s highest ranking member of Congress these days, he all but grimaces.

The apparent cause lies in the murky world of health care finance: Cuomo and his aides fault Schumer for failing to protect long sought changes to how the state allocates Medicaid — something the governor wanted even before New York became the American epicenter of the pandemic.

“I say to Sen. Schumer, it would be nice if he passed a piece of legislation that actually helped the state of New York,” Cuomo recently told reporters, referring to the Senate minority leader who has regaled the media with press releases about the $ 112 billion in emergency aid he’s directed to the Empire State.

That Schumer, a powerful Democrat who occupies a similarly centrist lane to the governor, should emerge as a preeminent focus of Cuomo’s ire during a crisis the governor says should engender unity is remarkable for what it says about the budgetary hellscape the governor is now facing. With the cessation of most economic activity in the country’s financial capital, the state is anticipating up to $ 15 billion less in revenue. Cuomo’s posture also suggests he doesn’t see a downside in aligning his Schumer sentiments with those of the commander in chief, whose cooperation he badly needs.

And so the senator, Cuomoland tells POLITICO, failed to protect a measure in the third federal relief bill that would have allowed some of Cuomo’s Medicaid reforms to go forward, reforms that Cuomo said would save the state $ 1.6 billion this year and more the next. Nor, they say, is the amount of Medicaid money that Schumer says he’s sending to New York State the actual amount of money in play, since it’s amortized over months, and the federal emergency order might not last that long.

“Why would the federal government say, ‘I’m going to trample the state’s right to redesign its Medicaid program, that it runs?’ That saves money?’” Cuomo said last week. “I don’t even know what the political interest is they’re trying to protect.”

Folks sympathetic to Schumer argue there’s a bit more to it than that: The governor is using Schumer to deflect blame for a terrifying budget shortfall that will result in service cuts across the state. They say it’s a reasonable, if cynical, political play.

“One thing the governor is never willing to mention is the Senate is controlled by the Republicans, Donald Trump is president, and these guys have an inherent interest in screwing New York, because they’re all motherfuckers,” said one Schumer partisan.

A Cuomo confidant scoffed at the premise.

“The two most challenging budgets he had was his first one and this one, and those also happened to coincide with high marks in the polls, because as long as you level with people, they understand tough decisions,” that person said.

The governor is finding support for his argument in unusual places.

In a follow up interview, Zeldin said he knows that Schumer killed the Cuomo-friendly clause because aides to McConnell and House Minority Leader Kevin McCarthy told him so.

Spokespeople for McConnell and McCarthy didn’t respond to requests for comment.

A spokesperson for Schumer said the senator has taken no position on Cuomo’s proposed Medicaid cuts and had played no role in stripping the clause from the legislation.

Schumer aside, a number of Democrats oppose Cuomo’s Medicaid reform proposals on the merits, including his effort to have localities pick up a more substantial portion of the tab. Critics argue the reforms were crafted behind closed doors, that it makes no sense to cut health care funding during a health care crisis, and that even if there is some sense in targeting waste and fraud, it also makes sense to raise taxes on the wealthy to support a program that poor New Yorkers rely on — a step that Cuomo refuses to take.

Even before coronavirus disrupted society as we know it, Cuomo was facing a $ 6 billion budget shortfall, one that he largely laid at the feet of Medicaid growth. He punted the issue to a panel stacked with allies.

His panel issued recommendations that it said would save the state $ 1.6 billion this coming fiscal year (and even more the next).

At first, it seemed like Congress might acquiesce to Cuomo’s desire for legislation allowing all of those changes to go forward. A March 25 draft version of the third coronavirus relief bill in fact included language that appeared to do just that. In the final bill, that language had been removed.

Cuomo’s initial response to the final legislation was volcanic. He threatened to forgo more than $ 6 billion in additional federal Medicaid money because the legislation would stymie his reform efforts. He spewed blame.

“[New York’s congressional delegation] never fixed that bill,” he told reporters. “They never fixed it. They said they would, they never did.”

Last Sunday, after he suggested Schumer pass “legislation that actually helped the state of New York,” he and Schumer spoke.

“Speaker [Nancy] Pelosi, Governor Cuomo, and I had a long and productive conversation last week,” said Schumer in a statement. “We agreed that there is significant money for New York in the legislation we passed, but that much more is needed and we will continue to work together to make that happen."

After the call, Cuomo issued a marginally conciliatory tweet.

“NY wasn’t helped by the federal legislation,” Cuomo tweeted. “We received less than other states despite having the most COVID-19 cases. I spoke to Senators Schumer, Gillibrand & Speaker Pelosi & they have committed to right this wrong. I am committed to working with them.”

The lull didn’t last long. A few days later, the governor was back to criticizing his state’s senior senator.

“God will determine who is to blame,” Cuomo said Tuesday when asked about his dustup with Schumer over the federal legislation. “You and I just deal with the realities. The senior senator will say he is in the minority, which is true… They’ll say politics, I say politics be damned in the middle of this.”

In the meantime, Cuomo seems to have found his own solution to this federal-state Medicaid standoff. He still plans to pursue the changes, likely after the coronavirus crisis passes.