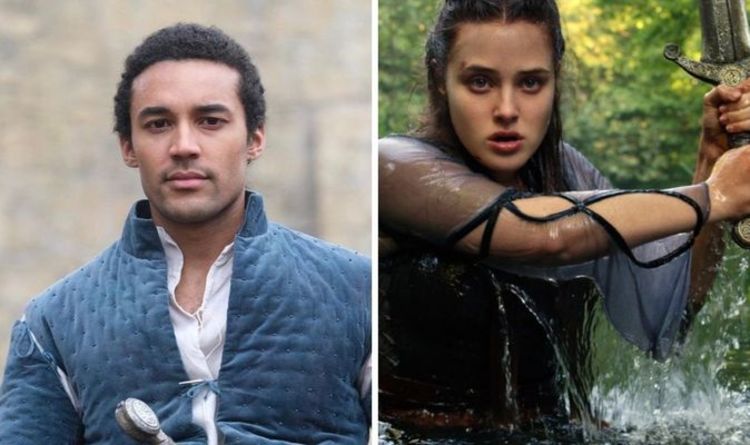 13 Reasons Why star Katherine Langford faces off against Ozark and Westworld’s Peter Mullan in an exciting new spin on the King Arthur Legend. Before the first season is released on Netflix, the series’ head writer has explained some dramatic changes from book to screen, including an inventive take on the wizard Merlin, played by Vikings favourite Gustaf Skarsgård.

In the first season, based on Tom Wheeler and Frank Miller’s illustrated Young Adult novel, the story turns the clock back to before Arthur ascends the throne.

Young sorceress Nimue (played by Katherine Langford) is outcast for her magical gifts, and must take on the sinister Red Paladins.

She then stumbles upon a young mercenary named Arthur (Devon Terrell) and a mysterious quest to find Merlin (Gustaf Skarsgård) and deliver a powerful sword.

READ MORE: Cursed Netflix release date: How many episodes are in Cursed?

The 10-episode series will be available on Friday 17 July and is set to become the next essential summer watch for streaming giant Netflix.

Fresh from her roles in 13 Reasons Why and Knives Out, Katherine Langford is positioned as a brand new fantasy heroine for fans of Game of Thrones and The Witcher.

Cursed will follow the original novel fairly closely, but writer and producer Tom Wheeler has revealed the series has had to make some pivotal changes.

During a preview for TV Insider, Wheeler detailed the series’ premise and promised Cursed’s original readers will still have plenty of surprises to look forward to.

She then embarks on a strange and perilous quest, but Wheeler warns the adventure won’t exactly align with the plot of his original novel.

He continued: “As we began to break down the book chapters and images and shape them into episodes, some events shifted back or were moved forward.

“Plus, we found avenues and opportunities to expand on the world and our characters’ backstories. This will be most noticeable as it relates to Arthur, Morgana (Shalom Brune-Franklin) and Sister Iris (Emily Coates).”

Certain characters will become very familiar to anyone who has read up on their Arthurian legends, but with a number of new twists.