D.C. leaders fear an outbreak that cripples the country 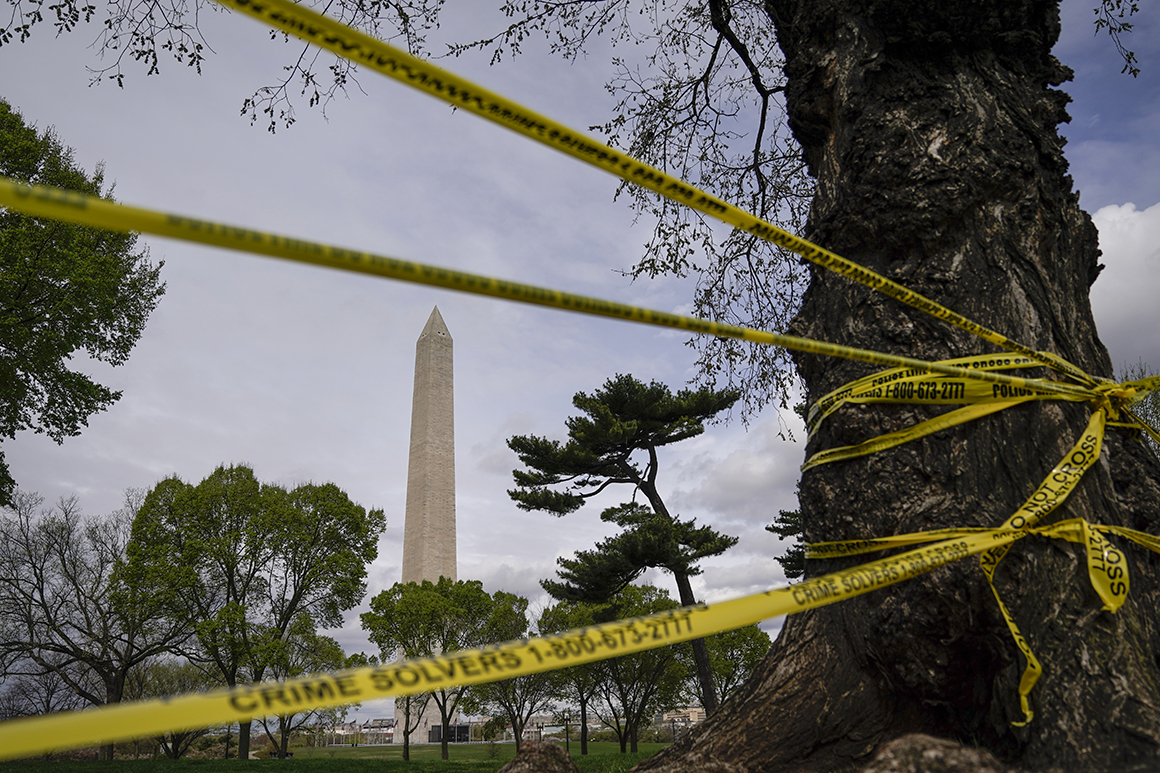 Imagine New York City now, except with hundreds of thousands of federal workers tasked with running the nation’s response to coronavirus living there.

That’s where government officials and health experts across the Washington, D.C., metropolitan area fear the region is heading. The pandemic has gone easier on the capital than some other major metro areas, but it is about to hit hard, they say.

And the scenario could have dangerous repercussions for the country, stifling the national response by federal employees on the front lines of fighting the virus.

“A major outbreak among our critical federal workforce could be catastrophic, crippling the national response,” warned Maryland Gov. Larry Hogan, who with others expressed growing fears that the region could look like New York by Easter.

With his counterparts in Washington and Virginia, Hogan moved in recent days to strengthen his state’s stay-at-home order designed to slow Covid-19’s spread across densely-populated metro areas.

Escalating numbers across the area, which represents the third-largest economy in the nation, could impede the government’s ability to deliver unemployment checks, small-business loans and safety-net services. Last week brought fresh anxieties that national security could also be at risk when four employees at Fort Meade in Maryland’s Anne Arundel County tested positive for the virus. And on Wednesday, BuzzFeed first reported on an internal Department of Homeland Security report stating that 349 employees tested positive for the coronavirus while 7,000 are quarantining or self-monitoring.

Hospitals in the region have raised distress signals to their congressional delegations about inadequate staffing as they prepare for surge capacity. The number of confirmed cases — more than 4,000 across the region on Wednesday afternoon — nearly quadrupled over the past week alone, with 1,986 cases now in Maryland, 1,485 in Virginia and 590 in the District.

Leaders in the District, Maryland and Virginia sent a letter to President Donald Trump on March 15 requesting the national capital region be designated a priority location for a federally funded Covid-19 testing site. They’ve grown increasingly impatient at the lack of federal action. Other local needs mirror vast parts of the country. There’s a deficit in personal protective equipment, hospital beds and ventilators — and it’s hard to justify stockpiling when the machines are needed more elsewhere right now.

“We’ve got 6 million people here that are absolutely crucial to the wheels of government continuing to move, but things are not moving in a good direction,” Rep. David Trone (D-Md.) said between calls with local health care professionals. “These urban areas where the majority of our federal workers live will be hit much, much harder. We’ve got to see that coming and we’ve got to use every day, every week, to help build up the beds, ventilators, (protective equipment) and testing.”

Unions representing federal workers, attesting to abysmal conditions on the ground, are calling on the administration to immediately enact so-called continuity of operations plans across the government. Without leadership from the administration, officials said agencies have had to act on their own, with uneven levels of response. They complain there’s been no governmentwide report on how many federal employees have contracted the virus or been exposed to it, which labor groups demand.

The administration dragged its feet for weeks before issuing direct calls for agencies to maximize telework across the nation and restrict access to federal facilities, said Everett Kelley, national president of the American Federation of Government Employees, which represents 700,000 federal and D.C. government employees. Positions at airports, military hospitals, federal prisons and elsewhere require a physical presence at the job site, and Kelley’s received numerous reports from members indicating far more needs to be done to protect them and the public.

On a recent call with Department of Veterans Affairs workers, Kelley was told they were having to wear trash bags before going in to take care of patients. After, they took off the bags and handed them to another employee to use. “They’re just not providing the proper equipment,” said Kelley, who is asking the feds to come to the table to help deal with workplace safety concerns.

Administration officials say sending federal workers home would amount to a government shutdown, depriving vulnerable Americans of critical services like Social Security checks and food inspections. They contend that issuing federal guidance while also empowering agencies to make their own decisions about their personnel is the best process.

The White House, Office of Personnel Management and Office of Management and Budget have issued increasingly stringent guidance over the past month as the number of positive coronaviruses cases has risen across the country.

"President Trump has ensured the government continues to be open and essential services are provided to the American public," an OMB spokesperson said.

Some federal contractors embedded in agencies are forced to grapple with whether to show up to work or stay home and risk losing their contracts. That’s become a big problem in Rep. Gerry Connolly’s district in Northern Virginia, he said. And while more agencies have relented on such demands, Connolly said the Office of Personnel Management and Office of Management and Budget have issued at least four different directives that muddled the question.

Meantime, Maryland leaders on a private call with doctors from Johns Hopkins University and the University of Maryland on Tuesday told POLITICO that their prognosis for the area is grim. They don’t expect cases to peak until May 1 to May 15 and estimate that as many as 20 percent of health care workers will come down with Covid-19.

The region has fallen far behind in testing for the virus, officials on the call said. There aren’t enough testing kits or the ability to read them and there’s a five- to seven-day delay to read them in many cases.

The earliest cases of the coronavirus in the region coincided with two big conventions organized by the Conservative Political Action Conference and American Israel Public Affairs Committee. Experts believe the coronavirus was seeded through two main routes: People arriving from China to the U.S. along the West Coast, concentrated in the Seattle area, and cruise ship passengers, including a patient who spread the disease widely in New York before it marched down the I-95 corridor.

Sixty-eight people in the D.C. region have now died from the virus.

Dr. Lynn Goldman, dean at the Milken Institute School of Public Health at The George Washington University, said she’s worried about how quickly the cases are rising. She noted that many of the cases came before area governments began instituting stricter social distancing mandates.

Those patients were exposed several days ago. Typically, they were very sick before they were tested. And then it took several more days for them to learn the test results (the average has been seven to nine days in Virginia).

The D.C. region is a few weeks behind New York, Goldman said.

“We may have moved more quickly to do social isolation with regard to when the epidemic was introduced. We may not have done it soon enough,” she said. “If I were the governor of Maryland or the mayor of D.C., I would be worried about, particularly, parts of the region where people are packed in very densely and have a lot of social contact. All that social contact would have been happening without the distancing that eventually was put in place.”

The officials this week further ramped up steps to try to stem the numbers: Washington authorities have been patrolling parks and other large open spaces with bullhorns to disband crowds, including at Lincoln Park in the shadow of the U.S. Capitol. Ward 6, which includes Capitol Hill, Navy Yard and NoMA, have the most reported cases of coronavirus in the District, more than double that of Ward 8, which includes Anacostia.

The police chief said arrests should be a last resort and violators would be penalized $ 100 rather than being taken into custody. Bowser and the others issued stricter stay-at-home orders this week, with Virginia’s lasting until June 10. In Maryland, Hogan has handed down several coronavirus-related executive orders to help residents deal with the situation. He instructed residents who traveled outside the region in recent weeks to self-quarantine for 14 days.

The worst is yet to come, Rep. Bobby Scott (D-Va.) signaled in a telephone town hall Monday night. Scott told a worried constituent that “people have to understand what exponential means.”