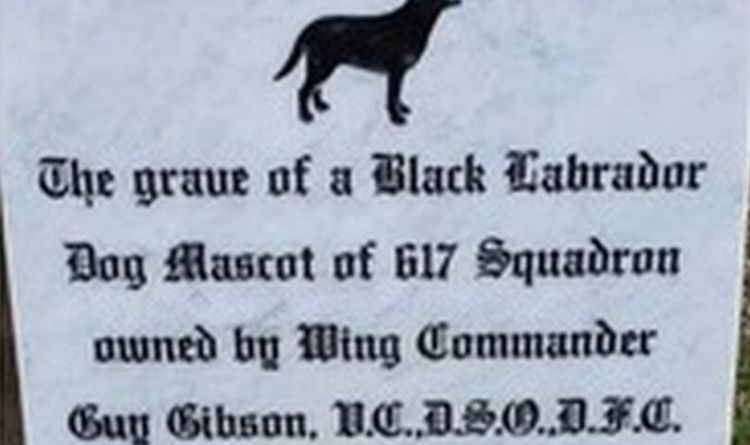 The 617 Squadron, based at RAF Scampton in Lincolnshire, undertook a low-level night attack on German dams in 1943, probably the most famous raid in the history of the force. Wing Commander Guy Gibson used his dog’s name as a code word to say the dam has been breached, after the Labrador Retriever had died on the same night as the raid.

The headstone at Scampton bearing the dog’s name has been removed, while film versions of The Dam Busters have either removed the name or changed it to Trigger.

An RAF source said the original gravestone will be stored in a safe location while the Air Historical Branch considers its next steps.

It is understood the RAF’s review of its historical assets is continuing and further changes may be made as work progresses.

Conservative former minister Sir Edward Leigh, whose constituency includes Scampton, wrote to the RAF station commander saying: “Undoubtedly we are both more sensitive and more sensible today when it comes to the delicateness of racialist and derogatory terminology which had been used with unfortunate informality in the past.

“It is perfectly understandable that this is a tricky matter to which there are no simple or easy solutions.

“I am, however, very fearful of our ability today to erase or rewrite history.

“The past needs to be explained, taught about, and learned from – not rewritten.

“Wing Commander Gibson’s dog was much loved by the Dambusters and was killed while he was on a raid risking his life to defend our country.”

A spokesman for the RAF said: “As part of an ongoing review of its historical assets, the RAF have replaced the gravestone of Guy Gibson’s dog at RAF Scampton.

“The new gravestone tells the story of Guy Gibson’s dog, but its name has been removed.”

One man said he felt the decision to remove the name as “appalling”.

He told LincolnshireLive: “It’s astounding to me. To desecrate a grave is completely wrong. The whole reason the dog was called is it was a name for dogs at the time.

“It was so loved – it’s going to upset a lot of people.

“I was brought up on the history of the UK, and I knew the word from the name of the dog long before I heard it was a racist term.

“I know there’s always been some issue over the name but to actually change his grave is wrong. He wasn’t called that in a derogatory way.”