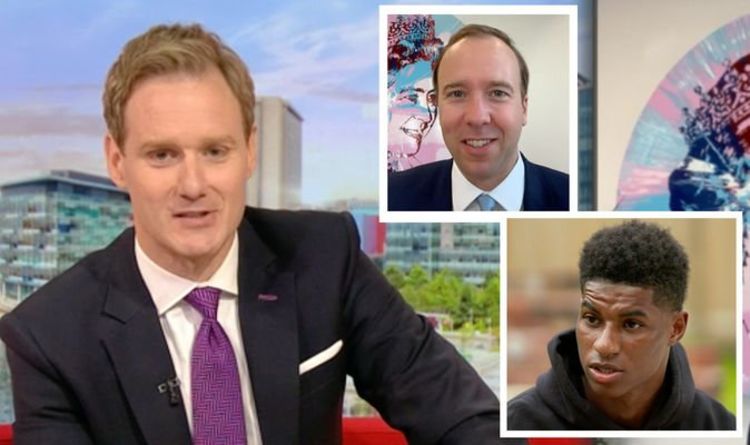 Dan Walker, 43, praised Health Secretary Matt Hancock, 41, for dealing with the criticism of his Marcus ‘Daniel’ Rashford error amicably. On Wednesday morning’s show, the BBC Breakfast team spoke to Mr Hancock about the breakthrough of anti-inflammatory drug dexamethasone and it’s affects on coronavirus sufferers, while also touching on the latest government U-turn which led to a huge mistake that left the nation reeling.

Following Manchester United football player Marcus Rashford’s calls for the government to designate more money for free school meals for school children, the politician was left red-faced after getting his name wrong in an earlier televised interview.

Marcus wrote to MPs about extending the free school meals voucher scheme outside term time, which would allow parents to still claim food vouchers for an estimated 1.3 million children in England during the summer holidays.

It was previously in doubt, but the nation cheered when the government made a U-turn on their decision.

The voucher scheme in England works out at around £15 a week per child and will cost an estimated £120million to extend it over the summer.

And while Mr Hancock praised the sportsman for his role in the initiative, he accidentally got his name wrong.

READ MORE: Carol Kirkwood’s co-star in cheeky remark about getting ‘close’ to her

Speaking on Sky News, the Health Secretary said the decision came after “Daniel Rashford” had a one-to-one conversation with the Prime Minister over the phone.

And sure enough fans soon took to social media after spotting the error.

During the BBC interview, Dan wanted to touch on the epic blunder that had the whole nation talking.

The presenter said: “Before I let you go, I know your job is a difficult one to come on this morning and to do all these live interviews.

“I completely misspoke,” he added, to which Dan asked: “Was that one of those moments you slap yourself on the head?”

“Too early in the morning,” the government minister joked before signing off.

Afterwards, fans took to Twitter to congratulate Dan on his “professionalism” and pardoned Mr Hancock for the slip-up.

One wrote: “@mrdanwalker….. just wanted to say it is good to watch you as a professional interviewer. I got a lot from your chat with @MattHancock…and it was good to see you be respectful of a man doing a vital job for our country. And just for the record, anybody can get a name mixed up!”