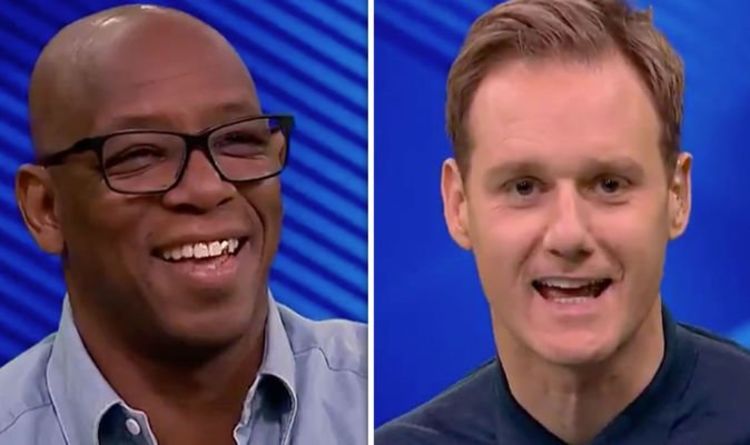 Dan Walker, 43, left co-star and I’m A Celebrity 2019 camper Ian Wright, 56, in hysterics as he surprised him with a tastier version of the infamous jungle Bushtucker Trials as he returned to Match of the Day. Co-host Alan Shearer, 49, also poked fun at his co-star, who had been missing for three weeks due to his stint in the wilderness.

Stepping in for regular host Gary Lineker, Dan opened the show with a cheeky pun to welcome Ian back.

“Good evening, six games for you tonight, Gary’s been evicted for one week only,” he joked.

“But it’s a real pleasure to be able to say Match of G’Day again, to Ian Wright.

“He’s out of the jungle and there’s only one question on everyone’s lips…” he smirked, as a platter of cake dropped drown from the ceiling via a rope.

The studio erupted with laughter as Ian threw himself back in his chair, cackling when he realised what was going on.

“Is it safe Wrighty? Have you eaten?” Dan giggled, referencing Ian’s snappy behaviour in the jungle that he put down to hunger.

The sportsman was still giggling away as the camera zoomed in on his surprise.

The cake was covered with Australian wildlife figurines so as to imitate a Bushtucker Trial.

When he finally caught his breath, he admitted: “I’ve eaten, I’m fine.”

Dan confessed: “We didn’t want to take any chances, so we’ve got a Victoria Sponge on stand-by just in case.

“Alan Shearer’s on tonight, it’s nice to have him back isn’t it Alan?”

His co-star giggled as he said: “It’s been the best three weeks we’ve ever had!

Ian finally composed himself and responded with a flippant joke: “I’ve been nowhere if I’m honest Al, just on a diet,” he chuckled, as the studio laughed.

After the show, Dan posted a tweet with a picture of the three presenters, continuing to poke fun at the former striker.

“Thanks for watching. Lovely to have @IanWright0back. Always a pleasure @alanshearer. @GaryLineker returns next week #MOTD.”

Fans took to the comment section to applaud the jungle themed welcome and agreed that Ian looked “slim” after his visit to the Australian wilderness.

Another dan joked: “Ask him if he wants anymore Crocodile.”

A fourth quizzed: “Good job & who ate the cake?”