‘Dangerous levels of contempt’: Trump deploys a convention to attack Dems on religion 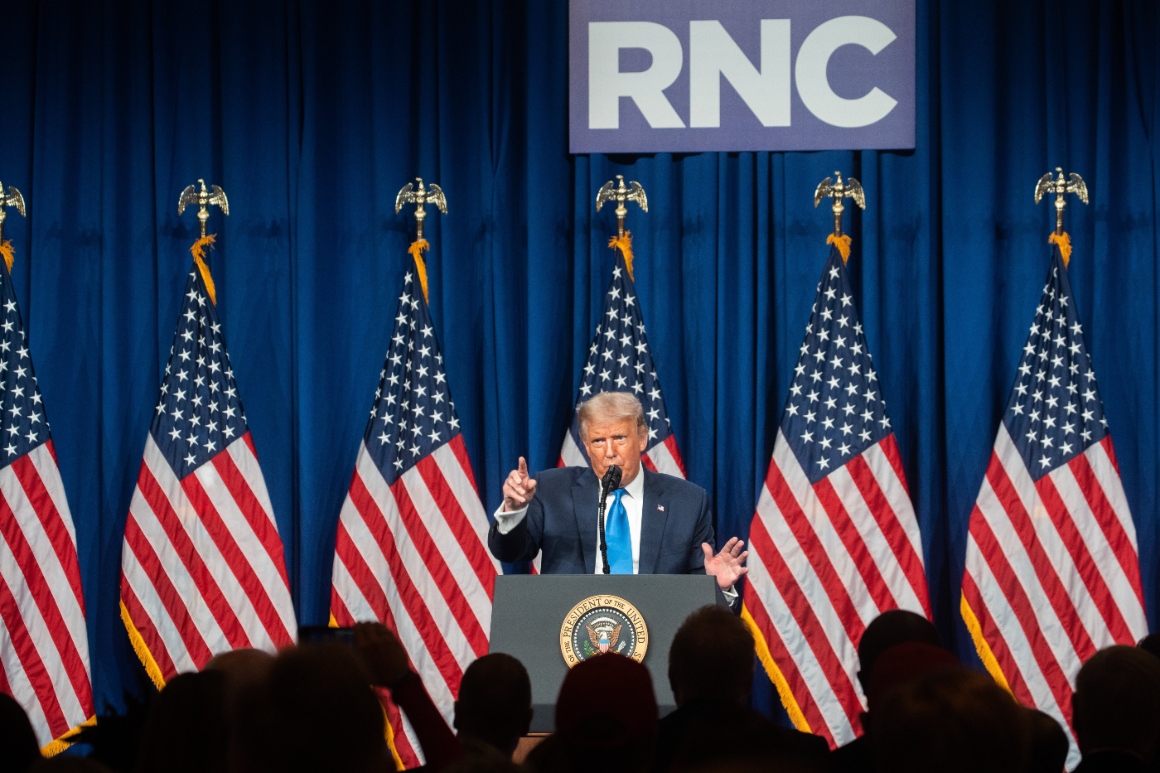 “You’re not allowed to go to church, but mass chaos in the streets gets a pass,” Donald Trump Jr. warned viewers in his speech on opening night of the GOP convention, an evening that began with a prayer from Cardinal Timothy Dolan, the Archbishop of New York for the Catholic Church.

“It’s almost like this election is shaping up to be church, work and school versus rioting, looting and vandalism,” Trump Jr. added.

The younger Trump’s comments came hours after one of the president’s most powerful evangelical supporters, embattled Liberty University president Jerry Falwell Jr., became entangled in a public sex scandal involving himself, his wife Becki and a former business partner of the couple. The Falwell episode played directly into the hands of Trump critics who have routinely questioned the sincerity and judgment of religious figures who work inside the Trump administration or serve as surrogates for his campaign. Becki Falwell has been a frequent Trump defender on television and served as a member of the president’s “Women for Trump” advisory board.

Campaign officials have stacked the speaking roster with conservative clergymen, church-going Americans, abortion foes and rising stars of the religious right. Many of the highest-priority issues for white evangelicals and white Catholics will be weaved into the high-profile speeches from Trump, his wife Melania and Vice President Mike Pence that will cap each evening. And the second-term agenda that Trump allies are expected to outline during the convention will cover areas where religious conservative continue to seek gains.

“Four years ago, many evangelicals voted on faith,” said Ralph Reed, executive director of the Faith and Freedom Coalition and a top surrogate for the Trump campaign. “Now they have an outstanding record on life, religious freedom and Israel.”

Indeed, many religious conservatives were asked to take a gamble on Trump four years ago. Nudged along by former Indiana Gov. Pence, Trump’s genteel running mate and a familiar figure in Christian conservative circles, and repeatedly reminded of the stakes if Hillary Clinton were to fill a Supreme Court vacancy, they were gradually persuaded to overlook the president’s character flaws. Trump won 81 percent of the evangelical vote in 2016 — despite endless stories about his personal life and just weeks after the release of the “Access Hollywood” recordings.

This time, Trump’s religious supporters don’t need to be convinced of his devotion to their cause. They need to be made excited about supporting him come November.

Overt appeals to religious conservatives that Republicans will sprinkle throughout their programming next week follow a cluster of recent polls showing waning enthusiasm for Trump among religious Americans, including his most steadfast supporters. Even more concerning to some of his allies is the uptick in support for Democratic presidential nominee Biden among evangelical voters, a development that suggests some religious voters are not only abandoning Trump but plan to pull the trigger for his opponent.

Biden, a lifelong Catholic, repeatedly invoked his faith during his party’s convention last week, as did several speakers close to the former vice president who testified to the paramount role religion has played in his life. Meanwhile, most Americans do not consider Trump to be a candidate with deeply held religious beliefs. Even among white evangelicals, who have defended some of his most controversial actions as president, only 40 percent believe he is a person of faith like them.

“For Joe, faith isn’t a prop or political tool,” said Sen. Chris Coons (D-Del.) during an appearance at the Democratic convention last week. “People, Joe believes, were made in the image of God. Joe learned that from his parents and the nuns and priests right here in Delaware, who taught him and inspired in him a passion for justice.”

A survey by Pew Research Center underscores the critical role the GOP convention must play in terms of injecting enthusiasm into Trump’s evangelical base, in addition to persuading religious Americans outside the president’s current fan club to support him in the general election. The June 2020 survey, conducted at the height of sweeping anti-racism demonstrations and the coronavirus pandemic, showed Trump’s approval rating among white evangelicals at 72 percent and white Catholics at 54 percent. At the same time, the poll found that 82 percent of white evangelicals and 57 percent of white Catholics intend to support Trump in November, illustrating an enthusiasm gap among pro-Trump religious voters that has so far shown few signs of abating.

To motivate Christian conservatives and faith-based voters, the president and his allies plan to keep the focus during the GOP convention on both his accomplishments and the threat they claim Biden and his running mate Sen. Kamala Harris (D-Calif.) pose to religious communities inside the U.S. and abroad.

One person familiar with the speech Trump will deliver when he formally accepts the party’s nomination on Thursday said his remarks “will illustrate the dangerous levels of contempt Democrats have for people of faith in this country.” This person did not specify how or whether the president will address Biden’s own faith background as a practicing Catholic, noting that the president’s speech is still being written.

“The president will continue to have this opportunity, which he started at the Council for National Policy, to explain that he’s the first president in U.S. history to preside over a United Nations General Assembly on religious persecution,” said White House counselor Kellyanne Conway. “He is the most pro-life president in history. He is also trying to broker peace between religious countries that have been at war for years, and this UAE deal with Israel is the latest example of that.”

Trump’s remarks at the Council for National Policy meeting last Friday did preview the message he and other featured convention speakers — like Abby Johnson, a former Planned Parenthood director-turned-abortion foe, and Nick Sandmann, a Catholic high school student who recently settled defamation lawsuits against two national media outlets — will deliver this week to energize religious conservatives. Trump‘s hourlong appearance before hundreds of conservative donors and activists featured numerous references to the administration’s reversal of pro-abortion rights directives, appointment of conservative judges and close relationship with Israel. At one point, the president explicitly acknowledged the political upside of supporting Israel given its high-priority status in white evangelical communities.

“Look what we just did … with the United Arab Emirates and Israel,” Trump said last Friday. “We did something that should have been done many, many decades ago … and it’s been really quite historic. And you know who appreciates it the most are the evangelical Christians. They appreciate it the most.”

At another point in his remarks, the president claimed he or Biden could have “anywhere from two to four, to maybe even five” Supreme Court vacancies during the next presidential term. The suggestion was aimed directly at conservative voters who harbor new or existing misgivings about the president, but would be more disturbed by the addition of liberal justices to the high court.

While appearing in Charlotte on Monday to formally accept the Republican nomination for president, Trump delivered a dark warning to conservatives: The “American dream will be dead” if Biden prevails on Nov. 3.

With the ongoing coronavirus pandemic preventing Trump from maintaining a vigorous public campaign schedule, the convention still will be his largest platform yet to convince religious conservatives it is worth sticking by him and turning out in November.

Trump campaign officials have long held that, despite anticipated declines in the president’s support with women and suburban voters, he can still win in November if he marginally improves his standing with religious Americans.

According to the Fox News poll from early August, 75 percent of white evangelicals are “extremely committed” to either Trump or Biden with less than three months to go until Election Day, which suggests a sizable chunk of the key religious demographic remains uncertain about which candidate they will support or whether they will vote.