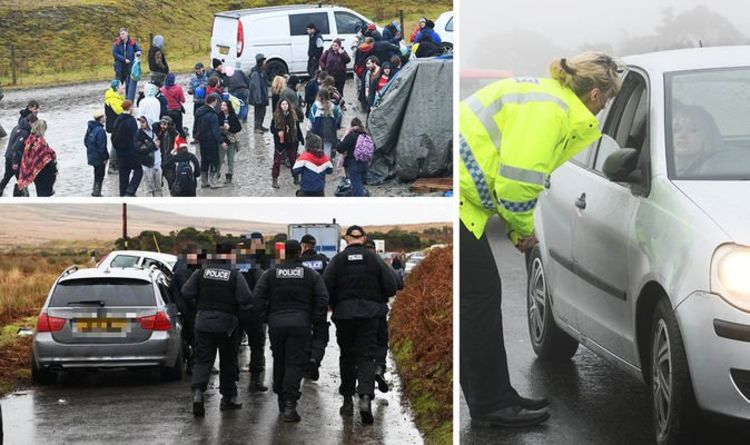 The rave at Cadover Bridge took place during the early hours of Friday, and officers from Devon and Cornwall Police closed several roads in order to bring the event to an end. Police said a collection of stolen nitrous oxide canisters were recovered from the site. Sergeant Tim Perrin said: “Would advise dog walkers to avoid the area due to the amount of waste, including human excrement, at the location for a few days.”

A 27-year-old man, from Kingskerswell, was arrested on suspicion of driving whilst under the influence.

An 18-year-old man, from Wiltshire, was arrested on suspicion of possession of controlled drugs – Class A and Class C.

Chief Superintendent Matt Longman, South Devon police commander, said: “We attended the scene and worked with individuals to bring about closing the event down.

“Roads were gridlocked and there was limited access for emergency vehicles to attend should they be needed.

“There was at least one medical incident that we could not get an ambulance to, this person was eventually taken to hospital. This highlights the importance of maintaining public safety.

“We have now re-opened roads as members of the public leave the location and the area is cleared.”

A partygoer called Ross said the rave was to highlight the “newe EU”.

He told Devon Live: “It’s especially special because the whole Brexit and all of the new EU things.”

“And um, XR, is really important and what we’re doing here is nothing more than anything else that you’ll do on your own land.

“It’s just us coming on private, uh public land, having a party, cleaning up, leaving, nothing is left.”

A car containing a “group of youths” also crashed near the site of the rave.

Devon and Cornwall Police said that the crash took place near Cadover Bridge at 12.50pm today.