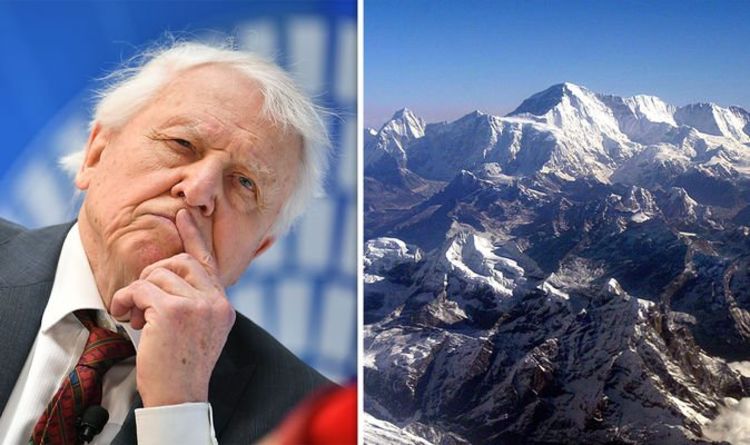 Sir David, 93, was speaking during the second episode of his “Seven Worlds, One Planet” series on the continent of Asia, where the Himalayas separate the plains of the Indian subcontinent from the Tibetan Plateau. Originally lifted by the subduction of the Indian tectonic plate under the Eurasian Plate, the Himalayan mountain range runs west-northwest to east-southeast in an arc 1,500 miles long. However, they are still rising.

Sir David explained how the Earth’s lithosphere, the rigid outermost shell of the planet, created different types of boundaries when the drifted towards each other slowly millions of years ago.

He said last week: “Away from Arctic Russia, Asia has the hottest deserts, highest mountains and tallest jungles on our planet.

“This is a continent of incredible variety, but it was not always so.

“Some 89 million years ago, India was an island lying away to the south.

“But it drifted northwards, pushing up the sediments between it and mainland Asia.

“Over millions of years, the sediment lying beneath crumpled up and role to form the Himalayas.”

Tectonic plates are able to move because the Earth’s lithosphere has greater mechanical strength than the underlying asthenosphere.

Sir David pointed out this is still happening.

He added: “Now these are the tallest mountains on the planet, they stand over five miles high.

JUST IN: Antarctica researcher stunned by ‘out of this world’ find in Southern Ocean

“India is still moving northwards and these mountains are still rising.

“Asia’s mountains stretch all the way from Afghanistan across northern India, to here in central China.

“These are the mountains of Shennongjia, among China’s highest.

“The forests here were, until comparatively recently, the least known in the world.”

Sir David previously revealed climate change spurred him on to make another documentary at his age.

He said: “We are now universal, our influence is everywhere.

“We have it in our hands to save the world, and we have made a tragic, desperate mess of it so far.

“Nations are coming together and recognising we all live on the same planet  and we are dependent on it for every mouthful of food we eat and every breath of air we take.

“And making programmes like this, I’ve been doing it for a long time, and I’m sure a hell of a lot of young people are saying, ‘For God’s sake, why doesn’t he move over? Give another person a chance’, but, anyway, there I am.”

The second episode of Seven Worlds, One Planet was aired on BBC One on Sunday, November 3, at 6.15pm.

Viewers can now catch up with each instalment in Ultra-High-Definition (UHD) on BBC iPlayer.