David Beckham risks the wrath of Man Utd fans with... 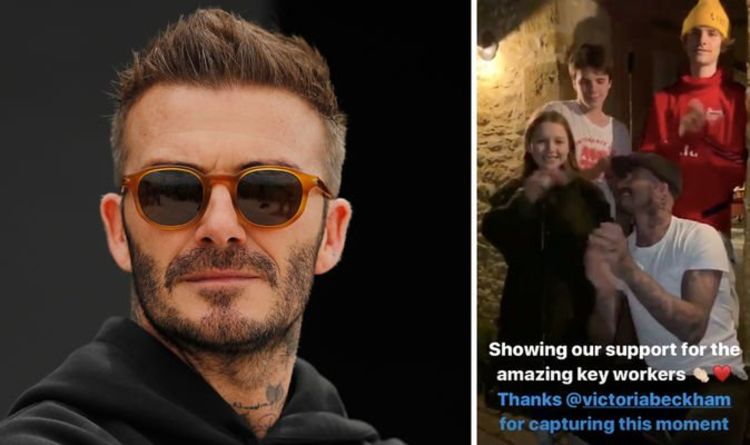 David Beckham has paid tribute to the NHS during the latest round of the ‘Clap for our Carers’ in a video with his two of his sons and his daughter Harper. However the video may have angered Manchester United fans, with one of his sons wearing an Arsenal jumper.

Beckham joined a host of people and celebrities paying tribute to the NHS for their work during the coronavirus pandemic.

Beckham, filmed by wife Victoria, along with three of his children clapped for the NHS on his Instagram post, captioned: “Showing our support for the amazing key workers. Thanks to Victoria Beckham for catching this moment.”

Beckham also posted a video on Instagram TV from the NHS, with his own caption: “Thank you to all our healthcare workers for your bravery hard work and compassion.”

The NHS are currently battling the coronavirus in the UK, as the country remains in lockdown and the death toll has risen to 2,921 by Thursday.

But Beckham’s video has possibly risked the wrath of Manchester United fans, who adored him during his 11-year spell at Old Trafford.

BACK BRITAIN’S NHS HEROES – HOW YOU CAN HELP

Beckham left United in 2003 for Real Madrid, and went on to play for Los Angeles Galaxy, AC Milan and finally PSG as well as 115 times for England.

But his son was wearing an Arsenal jumper in the video he posted last night.

Beckham splits his time between the US and England, having now started Inter Miami FC who will start in the MLS when the States recover from the coronavirus.

Beckham did train with Arsenal in January 2013 just before hanging up his boots, and has been spotted at the Emirates with his kids a handful of times.

All three of his boys had trials with Arsenal as well but were not offered professional terms.

“All three used to have contracts with Arsenal,” Victoria revealed in March last year.