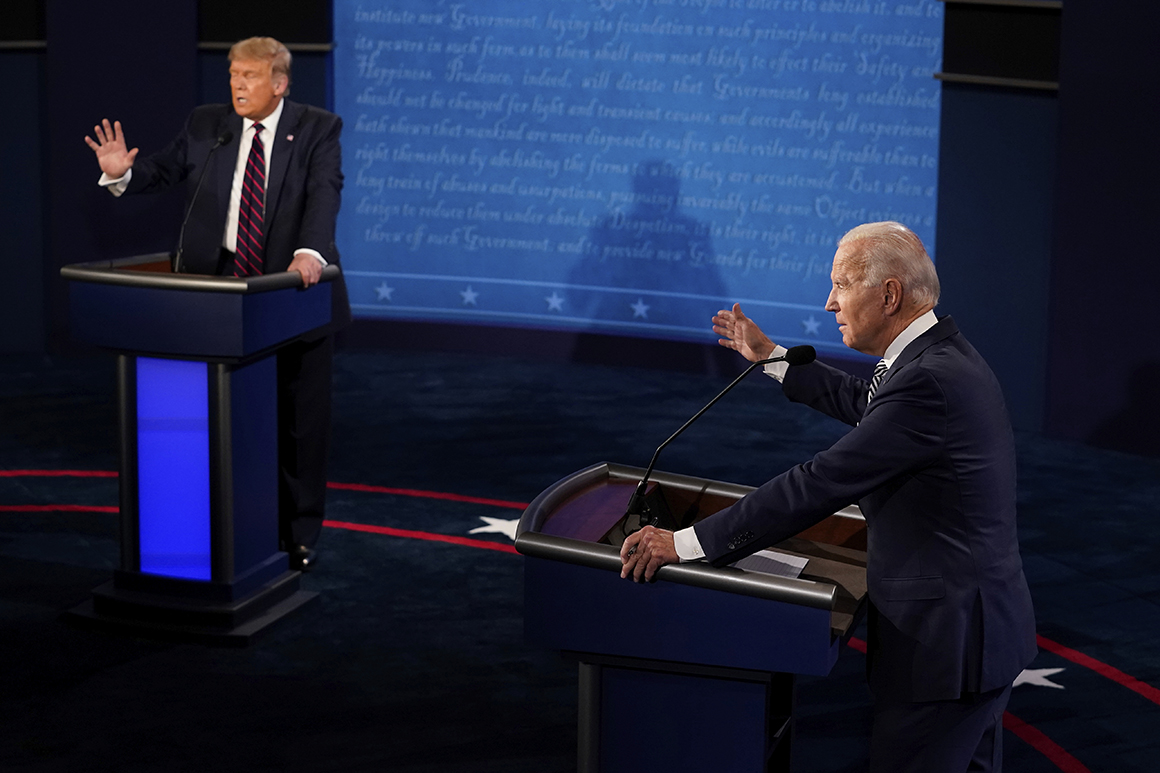 “During the times dedicated for open discussion, it is the hope of the Commission that the candidates will be respectful of each other’s time, which will advance civil discourse for the benefit of the viewing public,” the commission wrote in a statement.

Trump has repeatedly accused debate organizers of working to bolster his opponent. His reelection campaign denounced the idea of “granting an unnamed person the ability to shut off a candidate’s microphone” in a letter to the commission earlier Monday.

“It is completely unacceptable for anyone to wield such power, and a decision to proceed with that change amounts to turning further editorial control of the debate over to the Commission which has already demonstrated its partiality to Biden,” said the letter, signed by Trump’s campaign manager, Bill Stepien.

The commission’s latest statement says nothing about cutting candidates’ microphones to stop interruptions in their tracks. The moderator will still be responsible for ensuring each candidate has roughly equal speaking time during the open-discussion portions of the debate.

Trump‘s campaign said later on Monday that the president would take part in the final debate “regardless of last minute rule changes from the biased commission in their latest attempt to provide advantage to their favored candidate.“

Trump confirmed he would participate in the debate while speaking to reporters aboard Air Force One on Monday night, according to a pool report.

With just one forum left and polls showing him trailing, the president can ill afford to miss an opportunity to debate Biden. Senior Republicans were shocked that Trump refused to appear in the second debate, given his standing in the race.

People close to the president express skepticism that he will engage in serious prep ahead of the Thursday forum in Nashville, Tenn. Trump held some prep sessions with a group advisers, including former Gov. Chris a Christie of New Jersey and former New York City Mayor Rudy Giuliani, prior to the first debate. But allies say he has favored a more improvisational approach.

Trump’s campaign has also complained Monday about the topics of the next debate, insisting that it focus on foreign policy. In his letter earlier in the day, Stepien claimed the campaigns had agreed on the topics months ago. But Biden’s campaign retorted that the campaigns and the commission “agreed months ago that the debate moderator would choose the topics.”

“The Trump campaign is lying about that now because Donald Trump is afraid to face more questions about his disastrous COVID response,” Biden campaign spokesman TJ Ducklo said. “As usual, the president is more concerned with the rules of a debate than he is getting a nation in crisis the help it needs.”

The Commission on Presidential Debates also noted last month that the moderators alone choose the questions of the debate, and that the candidates and the commission do not know them until they are asked on stage.

The commission announced on Friday that NBC News correspondent Kristen Welker, who will moderate the debate, planned to focus on climate change, the coronavirus pandemic, race and national security, as well as abstract ideas such as “leadership” and “American families.”

The Trump campaign’s letter acknowledged that the topics were “worthy of discussion,” but said they were already covered during the first presidential debate last month.

Stepien accused the commission of shielding Biden from having to speak about his foreign policy record. His letter derided Biden’s record as vice president and evoked a frequently repeated Trump campaign line that Biden used his office for personal financial benefit from foreign actors. The Biden campaign has repeatedly dismissed the claims as a smear campaign.

“It is completely irresponsible for the Commission to alter the focus of this final debate just days before the event, solely to insulate Biden from his own history,” Stepien’s letter said.

The letter also suggested Trump was eager to tout his own diplomatic successes at the debate, including overseeing a peace deal between Israel and Bahrain and the United Arab Emirates.

In its statement later on Monday night, the Trump campaign said the president was going through with the final debate to confront Biden on his record on China.

The Trump camp’s claims of a debate commission set on helping Biden have recently reached a feverish pitch, particularly after debate organizers announced the second presidential face-off would be held remotely. That decision was largely ascribed to Trump’s positive coronavirus test, but the president refused to debate Biden via computer. The two candidates ended up participating in separate but overlapping town halls.

Trump has also personally ridiculed debate moderators, claiming they’re biased against him. He went after Welker on Saturday, tweeting that she’s “terrible & unfair.” Trump shared a New York Post article that claimed to expose ties between Welker and the Democratic Party, citing her parents’ donations to Democratic candidates and a past registration with the party.

An NBC spokesperson afterward said Welker was no longer affiliated with a party and pointed out that Trump campaign adviser Jason Miller had called her “very fair” and “a very good choice” to moderate the debate.