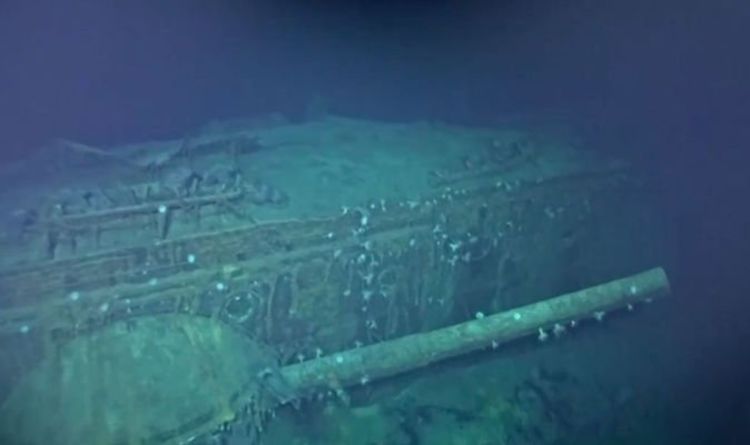 The team who were looking for the lost World War II warships may have found the Japanese carrier Akagi or the Soryu resting in nearly 18,000 feet (5,490 metres) of water in the Pacific Ocean more than 1,300 miles (2,090 kilometres) northwest of Pearl Harbour. These massive aircraft carriers, which were flagships of the Imperial Japanese Navy, went down during the historic Battle of Midway that took place between 4 and 7 June 1942. The find comes on the heels of the discovery of another Japanese carrier, the Kaga, last week.

The find was conducted by Vulcan Inc. and their Twitter account said: “The RV Petrel crew has discovered the IJN Kaga.

“A Japanese fleet carrier sunk during the Battle of Midway.”

The crew of the research vessel Petrel is hoping to find and survey all lost ships from the 1942 Battle of Midway, which historians consider a pivotal fight for the US in the Pacific during WWII.

The battle was fought between American and Japanese aircraft carriers and warplanes about 200 miles (320 kilometers) off Midway Atoll, a former military installation that the Japanese hoped to capture in a surprise attack.

The US, however, intercepted Japanese communications about the strike and were waiting when they arrived.

The expedition is an effort started by the late Paul Allen, the billionaire co-founder of Microsoft.

For years, the crew of the 250-foot (76-meter) Petrel have worked with the US Navy and other officials around the world to locate and document sunken ships.

It has found more than 30 vessels so far.

Vulcan Inc. director of undersea operations Rob Kraft said a review of sonar data captured on Sunday showed what could be a large Japanese aircraft carrier.

An autonomous underwater vehicle, or AUV, equipped with sonar was used to find the ship.

The vehicle had been out overnight collecting data, and the image of a warship appeared in the first set of readings on Sunday morning.

To confirm exactly which ship they have found the crew will deploy the AUV for another eight-hour mission where it will capture high-resolution sonar images of the site.

The high resolution scans have allowed the crew to measure the ship and confirm its identity.

The Battle of Midway occurred only six months after Japan’s attack on Pearl Harbor and one month after the Battle of the Coral Sea.

The inflicting damage on the Japanese fleet was devastating and it consequently proved irreparable.

Military historian John Keegan called it “the most stunning and decisive blow in the history of naval warfare”.

While naval historian Craig Symonds called it “one of the most consequential naval engagements in world history, ranking alongside Salamis, Trafalgar, and Tsushima Strait, as both tactically decisive and strategically influential.”