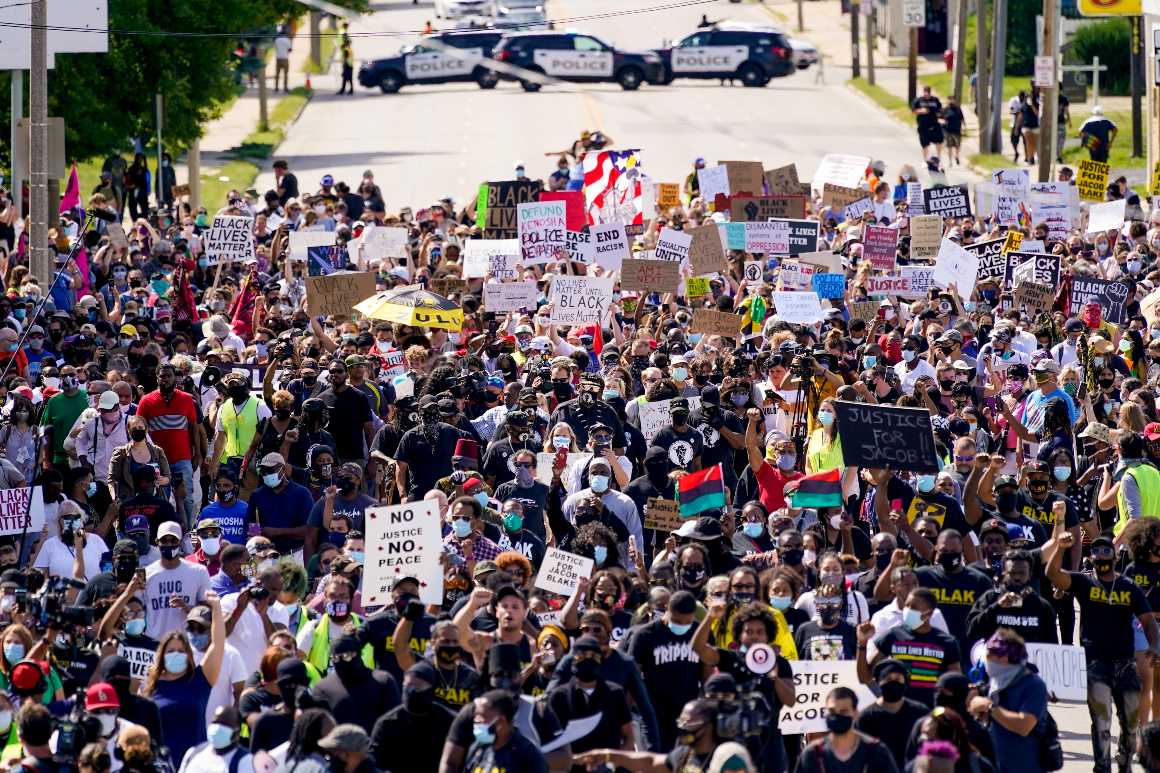 Kenosha Mayor John Antaramian also said Sunday that the trip was ill-advised and that he would have preferred for Trump “not to be coming at this point in time.”

“All presidents are always welcome, and campaign issues are always going on,” Antaramian told NPR. “But it would have been, I think, better had he waited for another time to come.”

But White House press secretary Kayleigh McEnany insisted Monday that “this president will go to Kenosha” despite Evers and Antaramian’s requests.

“He loves the people of Wisconsin, and he looks forward to speaking directly to them and unifying the state,” she told Fox News.

Trump and his allies have sought to highlight incidents of rioting and looting that have accompanied the city’s recent protests, which began after Jacob Blake, a 29-year-old Black man, was shot in the back seven times by a white police officer earlier this month as he leaned into his car.

Last Tuesday, two protesters in Kenosha were shot to death and a third was wounded during an attack allegedly carried out by a young white man who was caught on cellphone video opening fire in the middle of the street with a semi-automatic rifle.

Evers declared a state of emergency last Tuesday and announced that the National Guard presence in Kenosha would be doubled after rioters vandalized businesses and set fire to dozens of buildings.

Trump then tweeted last Wednesday that he would order additional federal forces to Kenosha, and he has subsequently taken credit for what the White House has described as a decline in the city’s alleged lawlessness.

But the president’s response to the nation’s racial unrest was relitigated over the weekend, after a caravan of hundreds of Trump supporters in pickups fought Saturday with Black Lives Matter protesters in Portland, Ore., where mass demonstrations have occurred for more than 90 consecutive days.

In some videos circulated on social media, pro-Trump counterprotesters could be seen firing paintball pellets at opponents and deploying chemical irritants as protesters threw objects at the caravan.

A man was shot and killed Saturday night, and although it was unclear whether his shooting was linked to the skirmishes, the victim’s hat bore the insignia of Patriot Prayer — a far-right group whose members have previously clashed with protesters in Portland.

Portland Mayor Ted Wheeler used a news conference Sunday to condemn “the hate and the division” engendered by Trump, who had called the caravan of his supporters “GREAT PATRIOTS!” in a tweet Saturday prior to the fatal shooting.

“Do you seriously wonder, Mr. President, why this is the first time in decades that America has seen this level of violence?” Wheeler said, adding that Trump’s “campaign of fear is as anti-democratic as anything you have done to create hate and vitriol in our beautiful country.”

“The president was highlighting that these were good Americans going in to peacefully be a part of a protest and show their voice,” she said. “And that’s what he was noting by the tweet and highlighting the video, which he routinely does.”

Trump has long criticized Wheeler for not doing enough to quash Portland’s protests, referring to the mayor as “wacky,” a “fool,” a “dummy,” and “weak and pathetic” in tweets over the weekend.

The president continued his attacks Monday, tweeting that “Portland is a mess” and warning that if “this joke of a mayor doesn’t clean it up, we will go in and do it for them!”

The three deaths in Kenosha and Portland have now cemented the cities as flashpoints in the final months of a White House race increasingly dominated by matters of culture, race and law and order.

Since the beginning of anti-racism protests that emerged in the aftermath of George Floyd’s killing by Minneapolis police in May, Trump and Republican lawmakers have sought to blame Democrats for episodes of violence that have accompanied some demonstrations.

And at last week’s Republican National Convention, Trump threatened that mob violence would descend upon communities across the United States should Democratic presidential nominee Joe Biden be elected in November.

Biden, meanwhile, has accused Trump of stoking divisions among Americans and noted that the nation’s unrest is unfolding under the incumbent president’s watch.

But in a sign of Kenosha and Portland’s growing impact on the general election campaign, Biden delivered a speech Monday in Pittsburgh that laid out “a core question voters face in this election: Are you safe in Donald Trump’s America?”

“I want a safe America,” Biden said during his address. “Safe from Covid, safe from crime and looting, safe from racially motivated violence, safe from bad cops. And let me be crystal clear: safe from four more years of Donald Trump.”

The former vice president addressed the accusations levied against him by the Trump campaign and firmly condemned looting and rioting in his address.

“The Radical Left Mayors & Governors of Cities where this crazy violence is taking place have lost control of their ‘Movement,’” he tweeted. “It wasn’t supposed to be like this, but the Anarchists & Agitators got carried away and don’t listen anymore — even forced Slow Joe out of basement!”

Although Trump’s visit to Kenosha carries political risks, it does allow the president to appear at the new focal point of America’s racial reckoning in advance of Biden. Some Democrats had urged their party’s nominee to make his own trip to the city in recent days.

“Here we go again. Democrats ignoring the state of Wisconsin, as they did in 2016,” McEnany said Monday — mocking Biden while arguing that Trump was “demonstrating his respect for the American people by actually going to places where Americans are hurting.”

Elaborating on Trump’s travel, McEnany said Trump is expected Tuesday “to meet with law enforcement to look at some of the damage from the riots” in Kenosha.

It was unclear, though, whether Trump would meet with Blake’s family during his time in the city. “We are efforting outreach [and] have not been able to connect yet,” McEnany told Fox News.

Trump campaign national press secretary Hogan Gidley said Monday the president “wants to go” to Kenosha and “begin to work to heal what has happened there.”

“And let’s be fair,” he added. “If the president of the United States didn’t go there, the media would all be saying, ‘Why isn’t he going to Wisconsin?’”

Former Wisconsin Gov. Scott Walker, a Republican, also said Monday that Trump should visit the city — but not necessarily to instill a sense of peace in the community.

“I think the president should absolutely go to Kenosha,” Walker told Fox Business, “first and foremost because I think people want to thank him.”