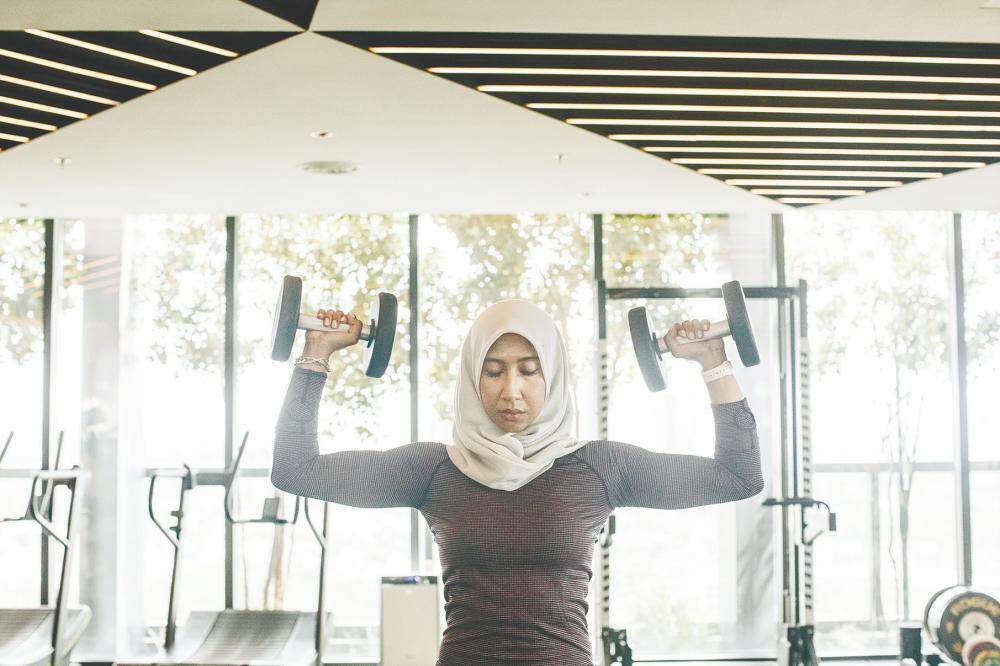 RAMADAN is a time for both spiritual development and physical maintenance for former national rower Ain Ramli. She credits her father for inspiring her pursuit of fitness, and her dream to inspire other women to stay healthy as her reasons for becoming a fitness instructor.

“I have always looked forward to the fasting month ever since I was little,” says Ain. “Spiritually, I will tell myself to try to look at things more positively and to take whatever that has happened with a pinch of salt.

“I will not get upset over something small, and I believe that we cannot change what is happening in our lives, but we can control how we react to the situation.

“Physically, I’ll make sure I have all plans organised in terms of job, recovery, workout, rest, etc. to make sure I get maximum results.”

Most people imagine that the month of Ramadan is the perfect time to get fit considering that those who observe fasting do so from sun-up to sundown. However, for Ain, the challenge of the holy month when it comes to fitness is to maintain it.

“During Ramadan, my goal is all about maintenance. [There are] not many changes in my usual fitness routine, but I’ll mostly train after breaking fast,” says Ain. “If I don’t have time to train after iftar, I’ll make sure to keep my training session within 30-45 mins close to break-fast time, and not to go too intense on the routine. It’s all about knowing your limitations.”

Ain’s journey into fitness began when she was very young. But, it was at college that she found her calling before she took it a step further.

“When I was a little girl, I always looked forward to seeing my Babah (father) on the field, tackling his opponents as one of our national rugby players back in the ‘90s,” says Ain.

“The passion that he puts out as an individual when it comes to training, then coaching, has since developed my interest in studying and learning more about fitness as a lifestyle and pursuing it professionally too, in later years.

“Fast forward to my tertiary education in UIA, I was battling bulimia nervosa (an eating disorder), and it affected my life for a while.

“However, it did not discourage me from pursuing my lifestyle and by reading a lot on overcoming the disorder and [about] fitness through studies, professional certifications, journals and research, I managed to regain my confidence.”

Between 2011 and 2013 Ain participated in the Duathlon organised by MALAKOFF, and won a few series during those three years.

At the same time, in 2011 she was influenced by a good friend to join the national rowing competition at university level, and fell in love with the sport instantaneously.

“I then trained hard, and Alhamdulillah, I managed to secure an official placement in the national team to represent Malaysia for the 2013 Sea Games in Myanmar,” says Ain. “We managed to get into the finals, and it kick-started my career [to becoming] the fitness advocate and instructor that I am today.”

However, for many, a Muslim female fitness instructor who also observes the Muslim dress code is largely unheard off.

“One of my goals being in this male-dominated industry is to inspire more people from all walks of lives to stay healthy no matter what, especially women,” explains Ain.

“I want to create more awareness and encourage them to be more comfortable in their skin, and to take better care of themselves by working out.

“Most Muslim women reach out to me personally via Instagram for fitness advice and also for personal training.

“I am still humbled and fascinated to see the increasing number of women who have started taking care of themselves while embracing a healthy lifestyle. And they trust me in the process.

“I guess in a way, it does encourage more Muslim ladies to work out too and to take better care of themselves. The stigma of Muslim ladies and fitness is often a concern; however, I always believe that it is possible to workout without jeopardising the other parts of your life.”

In 2018, Ain stepped out of her comfort zone and did trail running. “I even competed. Shortly after that, in 2019, I tried Crossfit, which used to intimidate me a lot. Surprisingly, I enjoy it a lot, even now.

“What’s next for me? Most probably, martial arts.”