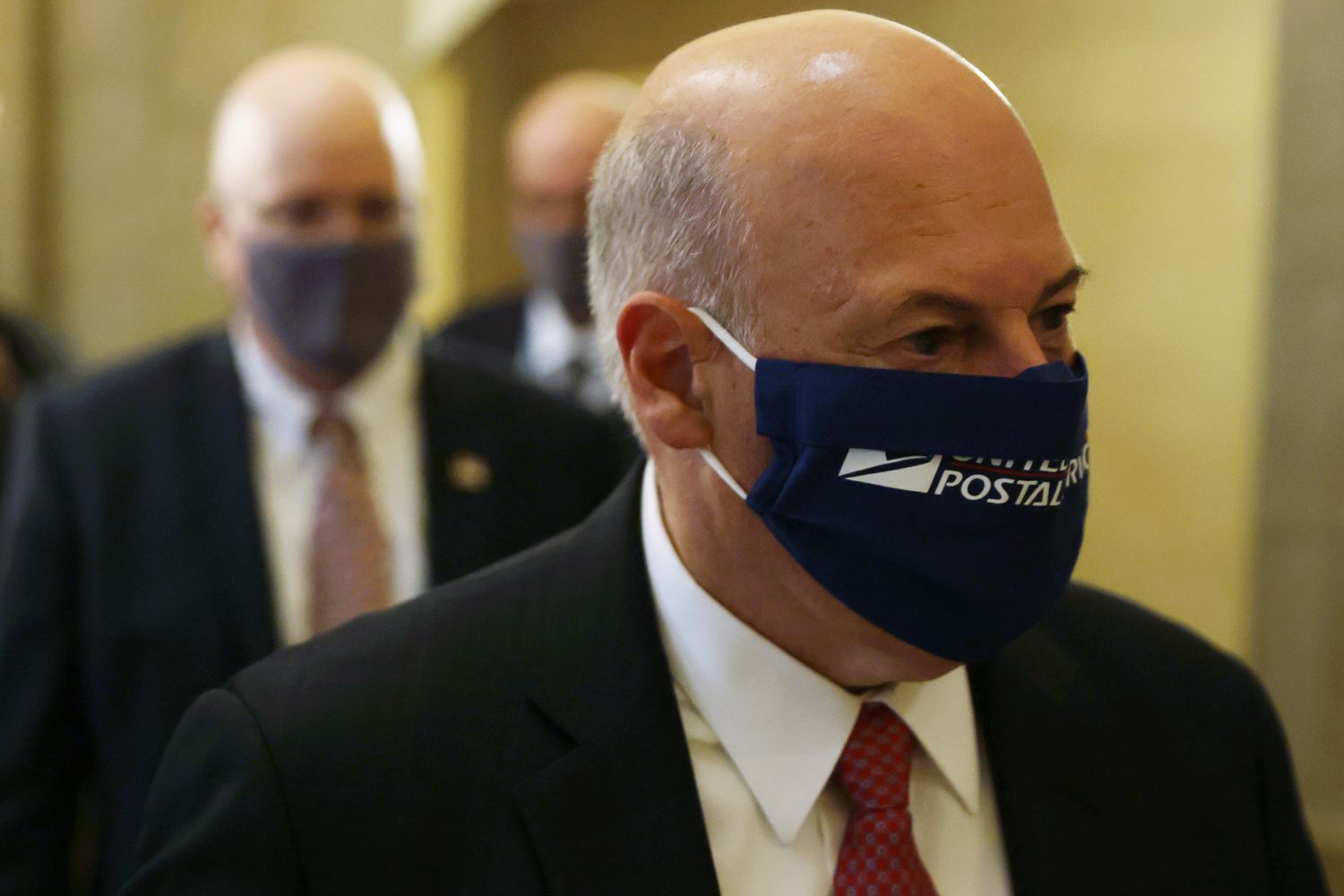 “Without dramatic change, there is simply no end in sight, and we face an impending liquidity crisis that threatens our ability to deliver on our mission to the American public,” DeJoy told senators via video conference.

DeJoy, a Republican megadonor, also pushed back on the idea that his proposed changes to the organization are intended to suppress mail-in voting for the upcoming election, calling it a “false and unfair” narrative and an “outrageous claim” that undermines public faith in the election. He vowed to prioritize election-related mail and said Americans should have confidence that their ballots will be delivered on time.

“Managing the Postal Service in an efficient and effective manner cannot succeed if everything is politicized,” DeJoy said, adding that he has never discussed the Postal Service with President Donald Trump other than during a congratulatory call when he was appointed earlier this year.

DeJoy defended his proposed operational changes as necessary for the Postal Service’s long-term viability. He reiterated that he plans to delay the proposed changes until after the election, a move intended to placate Democrats who have voiced strong opposition to the moves.

“I recognize that it has become impossible to separate the necessary long-term reform efforts we will need to undertake from the broader political environment surrounding the election, and I do not want to pursue any immediate efforts that might be utilized to tarnish the Postal Service brand, particularly as it relates to our role in the democratic process,” he said.

Notably, DeJoy did not echo Trump’s false attacks on the integrity of mail-in voting, pledging that “the Postal Service is ready today to handle whatever volume of election mail it receives this fall.” DeJoy said he personally votes by mail and supports the concept.

“I think the American public should be able to vote by mail,” DeJoy told lawmakers during the nearly three-hour hearing.

DeJoy has become an instant villain for Democrats in the Trump era. He was on relatively friendly terrain on Friday, in his first public appearance since coming under harsh scrutiny for his overhaul of the agency.

Senate Republicans scheduled the hearing in order to give DeJoy an opportunity to defend himself before he appears before a Democrat-led House committee on Monday, according to Sen. Ron Johnson (R-Wis.), the panel’s chairman. Johnson accused Democrats of manufacturing false claims about the Postal Service for political benefit.

DeJoy’s testimony came after senior Democrats expressed alarm about Trump’s attacks on voting by mail along with a host of operational changes deployed by DeJoy that they fear could upend the November election. The Postal Service recently sent letters to 46 states warning that potential delays in mail delivery could leave ballots uncounted.

“Was there a management trigger that things were not going right that you paused it, or did it take just public outcry to say stop this especially as we’re heading toward an election,” asked Sen. Gary Peters (D-Mich.), the top Democrat on the committee, in an interview. Peters added he was concerned DeJoy was leaving some changes in place.

Democrats have also raised questions about DeJoy’s selection for the role as Postmaster General in the first place.

Democrats on the House Oversight Committee said Thursday they have evidence that DeJoy was not among the candidates initially vetted by a firm hired to select the next Postmaster General — which they called a “highly irregular” development. The lawmakers said DeJoy’s name was proposed by John Barger, a member of the USPS Board of Governors and a fellow GOP donor.

House Democrats are set to pass legislation in a rare Saturday session to shore up the Postal Service with $ 25 billion and to block DeJoy’s moves.

Senate Minority Leader Chuck Schumer (D-N.Y.) recently sent a letter to the Board of Governors, asking for additional information about DeJoy’s selection. In the letter, Schumer noted the search firm refused to answer questions from his staff, citing a non-disclosure agreement.

Johnson defended DeJoy’s selection ahead of the hearing, saying he was “identified by a professional search firm that was looking for someone who has the managerial capabilities and skill set to come in and fix an almost unfixable problem here.”

Before becoming Postmaster General, DeJoy was chief executive of the supply chain business for XPO Logistics, a logistics company based in Connecticut that does business with the Postal Service.

But he also arrived at the job after cultivating deep ties with the Republican Party and Trump.

The GOP megadonor started seriously supporting Republicans running for office after he and his wife Aldona Wos moved to Greensboro, North Carolina, in the late 1990s from New York.

Wos, who was nominated by Trump in February to be ambassador to Canada, also served as ambassador to Estonia in the George W. Bush administration and later was the health and human services secretary for former GOP North Carolina Gov. Pat McCrory.

McCrory, in an interview, called DeJoy “the most qualified person to hold that job since Ben Franklin” was Postmaster General.

DeJoy is active in North Carolina’s philanthropic circles, holding events for his Catholic church and universities like Duke and Elon at his 15,000 square foot house in Greensboro, which some in his community call “The Castle” and which is also used for Republican fundraisers, including one attended by Trump in 2017.

“Louis’ thing was these big flashy fundraisers with a lot of high-profile people,” said one North Carolina Republican operative who knows him. “I always felt like he wanted to be a big f—— deal. … His personality is very much like Trump’s. I can totally see how they get along.”

Friends say the Brooklyn-born DeJoy admires Trump for being a self-styled disruptor.

“He loves Trump, loves him to death,” said the operative. “I think he likes somebody who stands for what he believes in and says it like it is. They’re both ‘say it like it is’ kind of people.”

The person recounted one episode in 2018 when DeJoy created something of a scene at a GOP fundraiser held at the Greensboro Country Club. Attendees were awaiting the arrival of Vice President Mike Pence, who was late after touring tornado damage.

“The room is dead silent. No one is talking and so DeJoy comes storming in, like he’s getting ready to storm the beaches of Normandy. He uses the ‘Hook ‘em horns’ sign in his mouth to whistle and he whistles right into the microphone,” the person said. “That whistle was ear-piecing.”

K.D. Kennedy, the finance chair of the North Carolina Republican Party, said DeJoy “loves Trump, and he admires him as being a very strong businessman and somebody who cares more about the country at this point in his life than being an entrepreneur.“

DeJoy always hit the fundraising numbers that he had promised candidates when organizing fundraisers, and was “proud of the fact that he maybe was one of Trump’s best fundraisers,” added Kennedy, who has known him for several years.

Kennedy, who has been with both Trump and DeJoy together a few times, said that the two have a “camaraderie” since they have similar operating styles and views on life.

A White House official reiterated in a statement that DeJoy was not nominated, but instead selected by the U.S. Postal Service Board of Governors.

But since August 2016, he has donated more than $ 1.2 million to the Trump Victory Fund, a joint fundraising committee of the Republican National Committee and the Trump campaign, including a recent donation of $ 210,600 this past February, FEC records show.

According to a person familiar with his hiring, DeJoy’s Trump connections and donations were a negative for some board members, but his logistics experience outweighed such concerns.

The board had a “long discussion” about his Trump ties, the person said, because they knew it was going to be “a lightning rod.”