Delhi Durbar tiara: Most extravagant diadem in the royal collection is now worn by Camilla 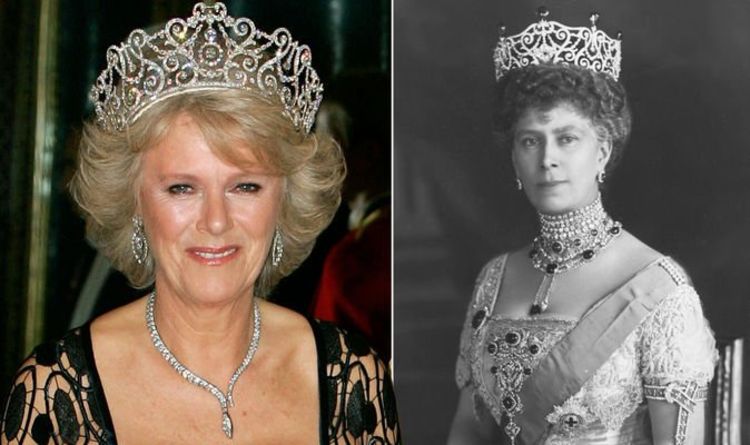 The Queen, 93, gave Camilla Duchess of Cornwall, 72, the Delhi Durbar on long term loan in 2005 after her marriage to Prince Charles, 71. A real statement, Camilla has only been seen in public wearing it once, while Queen Elizabeth has never stepped out in it.

Over 100 years old, Queen Mary had this diadem made in 1911 for the Delhi Durbar, which was a huge celebration held in Delhi to mark the coronation of King George V & Queen Mary as Emperor & Empress of India.

After it was decided the Crown Jewels could not leave the UK, a new crown had to be made for George and a new tiara for Mary.

It was the only one of the Indian coronation durbars to be attended by the royals themselves, as on other occasions, the Viceroy General stood in.

Footage from the time shows Mary wearing the tiara at the event.

Mary gave the tiara to Queen Elizabeth, the Queen Mother, on permanent loan in 1946, and she wore it the following year during a royal tour of South Africa.

The Queen Mother kept it until her death, and then it passed on to the Queen, who kept it in her collection for many years without wearing it.

Instead, it was one of the tiaras given on long term loan to Camilla, Duchess of Cornwall, in 2005.

She wore it at a dinner for the Norwegian royal family in 2005, and it caused quite a stir, with many seeing her being gifted such a “queenly” tiara as evidence Her Majesty supports Camilla becoming Queen when Prince Charles ascends to the throne.

Mary had the Boucheron Loop Tiara dismantled to make this piece. Garrard made the new version, and originally it was topped by pear shaped Emeralds from the Cambridge collection. These were removed in 1922 and used in the Vladimir Tiara.

Mary also sometimes topped the Delhi Durbar with the Cullinan III and IV diamonds – known colloquially as “Granny’s Chips”. These diamonds are now worn by the Queen as a brooch instead, which is said to be the most expensive single item in her collection.

Set in platinum and gold, it has diamonds forming S scrolls overlapped by diamond festoons.

Camilla has not worn the diadem since her first outing in it, making it 15 years since it has last been seen on a member of the Royal Family.

How many tiaras are there in the royal collection?

There are dozens of priceless tiaras owned by the Queen and other members of the Royal Family.

Many of the British aristocracy also own tiaras, wearing them at state banquets and on wedding days.

As well as tiaras currently in existence, there are a couple which have been dismantled to make other diadems.

This includes The Surrey Fringe and The Nizam of Hyderabad.