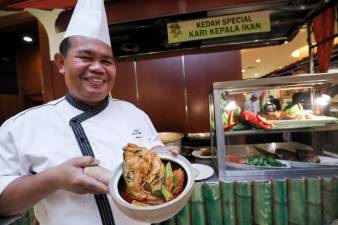 From April 27 until May 22, feast on Hidangan Idaman Sekeluarga@Big Apple Restaurant, returning for a second year running with more special dishes, including Lebanese-style whole lamb.

Outside of the Big Apple restaurant, a total of 21 stalls – which resemble kampung houses and are made of bamboo and decorated with traditional hand-made kitchen items – offer special food, including popular favourites like Uncle Bakri Fried Chicken.

The international dishes such as Thai green curry, wok-fried tiger prawn with shrimp paste, pasta and crepe roll with durian paste, and chicken masala are mouth-watering, along with delicious desserts such as exotic tarts, pudding caramel, red velvet cake, assorted Malay kuih and many others.

Authentic Malay Cuisine expert Chef Yusoff Abdul Hamid is front lining the elite assembly of chefs preparing the delectable traditional Malay dishes such as the fish head curry from Kedah, ayam percik from Kelantan, ikan merah asam pedas from Johor, and many others.

According to Chef Yusoff, Hidaman Sekeluarga consists of Malay dishes from different states and five menus rotated daily inside the restaurant, whereas the food served at the stalls outside will remain the same.

“We have come together to envision an array of traditional Malay dishes that is both flavourful and savoury, but we emphasise variety more than anything else, so we took some of the signature dishes from the states of Malaysia and went from there.

“The result is a glorious arrangement of some of the finest traditional dishes, we can offer,” said Chef Yusoff.

“We have more than 200 buffet dishes for Ramadhan,” he said.

The restaurant will also sell nasi briyani gam Batu Pahat (chicken or lamb) at the Ground Floor from April 26 to May 22. You can also pourchase the packed briyani rice, which comes with a water bottle, for RM12 between 5pm and 7pm, and RM10 between 7.01pm to 7.30pm.