Democrats aim to squeeze Republicans on next coronavirus relief package 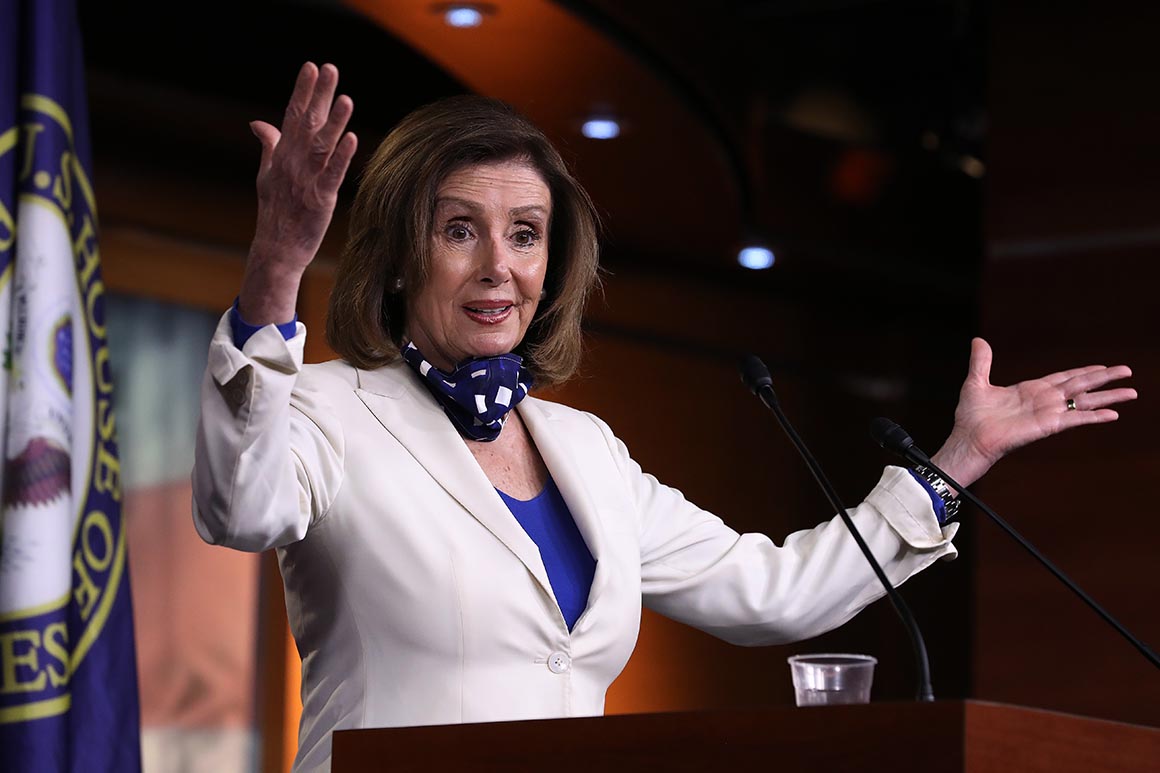 Top House Democrats on Monday signaled they are forging ahead with the next sweeping coronavirus relief package, aiming to increase the pressure on GOP leaders who have rejected Democratic priorities in previous aid bills.

On a private call with members Monday afternoon, Speaker Nancy Pelosi and her deputies sketched the outline of a trillion-dollar-plus package that would deliver aid to state and local governments — some on the brink of public service cuts — while shoring up safety-net programs for the nation’s most vulnerable.

“We have to think big,” Pelosi (D-Calif.) told her members several times on the call.

Pelosi is pushing committee chairs to finalize their portions by close of business Monday with hopes of pulling together a final package by week’s end, according to multiple Democratic lawmakers and aides. The bill could reach the floor for a vote as soon as next week, although several top Democrats are skeptical of that timeline given the scope of the legislation and uncertainty over when House members will return to Washington.

Pelosi has said she wants to bring the House back as soon as next week but coronavirus cases in the area continue to tick up in the Washington metro area. House Majority Leader Steny Hoyer (D-Md.) told Democrats on the call Monday that he did not have a specific return date but stressed members would be given plenty of notice given limited flight schedules.

Many lawmakers are still wary of returning to Washington, noting that Pelosi told them that the Capitol physician recommended they not return this week even as the Senate came back. But many say they are willing to return for a crucial vote on coronavirus aid, as they’ve done on two other occasions.

Democrats privately admit the expansive legislation is more of a policy wishlist than anything — much like a draft proposal Pelosi released in March — but say they hope to move before the Senate crafts legislation, laying down the starting point for bipartisan negotiations.

“Whether it’s access to credit or access to care, we want to be sure that — as sad as this all is —that we make progress,” Pelosi said on CNN Monday night, stressing the need to direct help to the neediest families and to alleviate economic disparities.

But they’re already running into a wall of resistance from the GOP. Republicans are pushing for liability protections for businesses in the next round of talks, a “red line” for them that Democrats have already rejected. President Donald Trump on Sunday also demanded a payroll tax cut in the next bill, something that has previously been rejected by lawmakers in both parties.

And some Republicans won’t even commit to supporting another coronavirus relief package, with House Minority Leader Kevin McCarthy (R-Calif.) pushing a wait-and-see approach on Monday.

“I’m not saying there’s not going to be another bill. … You just passed $ 3 trillion. You want to make sure that’s implemented and implemented correctly,” McCarthy said in a POLITICO Playbook interview Monday morning.

There are some moderate Democrats, too, who are anxious about voting on a sharply partisan package in the middle of a national crisis that has killed nearly 70,000 people and infected 1.2 million in the U.S. Several were hit by fierce GOP attacks in previous round of negotiations, after Pelosi sought policies like stricter carbon emissions rules for airlines that Republicans falsely dubbed “the Green New Deal.”

Republicans also criticized Democrats for holding up passage of the $ 484 billion relief package in April as Democrats fought for hundreds of millions of dollars in aid to hospitals.

In the call on Monday, Pelosi stressed the “ethics” of the next relief package, saying Democrats were focusing on an “ethical approach to saving lives … to how this money is distributed … and to how drugs are administered,” according to sources on the call.

House Democrats are eager to shape the next round of relief after Senate Majority Leader Mitch McConnell (R-Ky.) largely dictated the terms of the last bill, which replenished a small business relief program that had run dry.

Some lawmakers fear that fund, the Paycheck Protection Program, could run out again in the coming days — which Democrats hope will force Republicans back to the negotiating table, even as McConnell and McCarthy have said they preferred to wait to approve another massive rescue package.

The legislative battle over the fifth tranche of coronavirus relief has taken place with nearly every member of the House remaining homebound in their districts with little power to influence the negotiations. But that is expected to change next week.

The Capitol physician sent lawmakers a lengthy document on Friday for when the House does return. The guidance included limiting in-person office staff as much as possible, installing plexiglass shields, consulting with the Capitol architect on whether each office receives proper air circulation and encouraging aides and visitors to wear masks.

Lawmakers and staff are also encouraged to take their temperatures regularly in addition to completing a “yes or no” self-assessment that lists common coronavirus symptoms.

But Pelosi and McConnell turned down the administration’s offer to supply the two chambers with rapid coronavirus testing over the weekend, even as the Capitol physician has said he lacks enough tests to proactively check lawmakers for the coronavirus. In rejecting the offer, the congressional leaders cited the need for those tests to be sent to “front-line” facilities that need them more.

The Senate, meanwhile, has returned to Washington on Monday to resume consideration of a string of President Donald Trump’s nominees and to begin holding hearings on the federal coronavirus response.

House members watched anxiously as the Senate returned, with senators in masks, large signs posted in the basement outlining social-distancing recommendations and yellow stickers on the floor noting where reporters should stand. But not everyone was following the recommended protocol — several Capitol police officers were seen on duty without wearing masks, even in tight quarters where social distancing was nearly impossible.

Among members of the House, there is a fierce internal debate about exactly when and how to return to business.

A group of vocal Democrats and Republicans have been adamant that the House return as quickly as possible to normal businesses. That includes some of the most endangered lawmakers heading into the November election, eager to show voters back home that they’re actively engaged in the response.

“We are really glad that Congress is getting back to work in Washington, and we hope that this will be a return to regular order,” Rep. Stephanie Murphy (D-Fla.), a co-chair of the moderate Blue Dogs Coalition, said in a call with reporters Monday. The group, she noted, has not taken a formal position on whether the House should return.

But a broader group — described by one lawmaker as the “silent majority” — has real concerns about returning to the Capitol as the public health crisis rages on. Washington, D.C. is under strict social-distancing guidelines until at least May 15, and likely longer. The number of coronavirus cases in the D.C., Maryland and Virginia area continues to rise, with more than 2,200 deaths reported.

The level of alarm across both parties has been so sharp that last week it prompted House Democratic leaders to reverse their initial plan to bring lawmakers back by Monday.

John Bresnahan and Melanie Zanona contributed to this report.