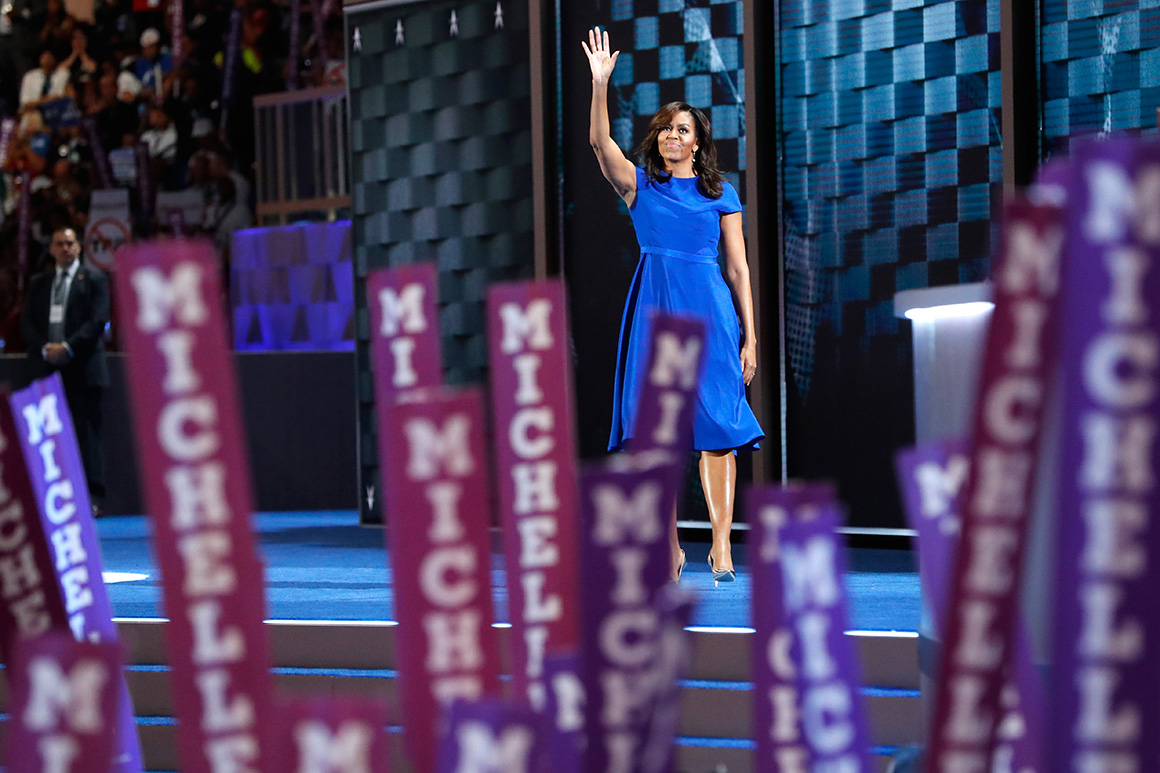 Sharpton’s decision to implore a higher power is perhaps unique among Democrats, but the strong sentiment is commonplace among party leaders, operatives, rank-and-file voters — and it’s led many to hold out hope she’ll be Biden’s vice presidential pick.

“When former Vice President Biden said he would choose a woman, she’s considered by most Americans of all races and all economic backgrounds to be the ultimate woman,” Sharpton told POLITICO. “Look at her book sales. It’s the first time I’ve seen someone write a book that can fill arenas. She has packed more arenas than Donald Trump.”

Of the roughly dozen or so names Biden is seriously considering, Obama isn’t one of them. She has made clear that she would rather focus on her work to register and turn out voters through her new organization “When We All Vote.”

““I’ll say it here directly: I have no intention of running for office, ever,” she wrote in her best-selling memoir, "Becoming," released in 2018.

Her refusals haven’t stopped Democrats from asking her to reconsider.

“I asked her when I last saw her and she seemed emphatic that she was not going to do it. I doubt if she does it,” Sharpton said, adding that he began praying she would change her mind after the recent encounter.

Still, none of that hasn’t gotten in the way of Democrats dreaming of a restoration of sorts. While discussing Biden’s potential veep picks, Michigan Democratic Party Chair Lavora Barnes recently told a reporter she didn’t want to name a preference. But when asked about Michelle Obama, she stopped for a beat.

“Oh my God,” she said, almost gasping. “That would be amazing.”

The idea of a Biden-Obama ticket is as much rooted in warm fuzzy nostalgia for the last Democratic administration as it is a product of the cold, hard data of polling.

In terms of popularity, no one else in the party is in the league of Michelle Obama, who last year overtook actress and philanthropist Angelina Jolie for the mantle of “most admired woman” in a global survey conducted by YouGov. Barack Obama was the world’s second-most admired man behind Bill Gates.

With so much star power and party goodwill behind the Obama brand, it’s little wonder there’s so much longing for the return of an Obama in a Democratic Party still reeling from Donald Trump’s 2016 victory and searching for the perfect candidate.

Valerie Jarrett, a friend and adviser to both Obamas, acknowledged the buzz around the former first lady but said running for and holding political office — whether it’s for vice president of president — isn’t her style.

“She really kind of transcends politics,” Jarrett said. “Obviously, she supports Vice President Biden but doesn’t see herself as a political figure.”

Her aversion to politicking and office-seeking is so strong, Jarrett said, that she hasn’t ever done formal endorsements, though she will support Biden. The Biden campaign, she said, has not even asked Michelle Obama to make a formal endorsement.

“It’s about more than winning the election. You have to govern. And if your heart isn’t in what it takes to do the work of being the vice president, then you shouldn’t do it. You shouldn’t do it just to win,” Jarrett said. “She could potentially help a lot more people using her current platform rather than joining a political office.”

Jarrett, who has privately let the Biden campaign know whom she favors to be his running mate, said Biden has “an embarrassment of riches from which to choose.” Many of the dozen or so people he’s considering, she said, have their own “star power” for his ticket.

Biden made clear his high regard for Michelle Obama on Feb. 27 during a rally in Conway, S.C., where a voter asked him whether he would consider her for a running mate. Before Biden could answer, actress Vivica Fox, who was onstage with Biden, quickly chimed in.

“I’d do that in a heartbeat if I thought there was any chance,” Biden said.

“I’d take her in a heartbeat,” Biden said. “She’s brilliant. She knows the way around. She is a really fine woman. The Obamas are great friends.” 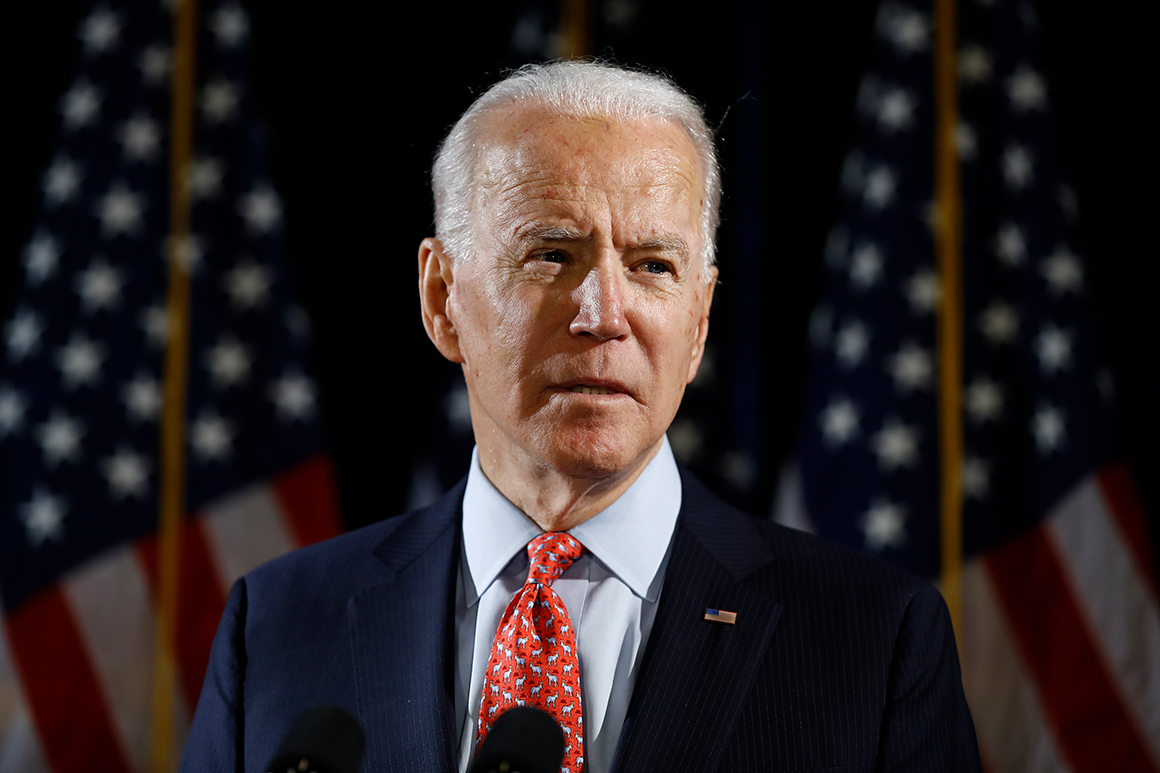 “Remember, she’s the one who’s popular with swing women,” Messina told POLITICO earlier this month. “If I was [Biden], I’d offer her the VP.”

Another former Obama adviser, David Axelrod, said he “would be beyond shocked” if Michelle Obama decided to run, saying she was “a conscript to politics and while she appreciated the chance to do things of value and importance to people, she has no patience for the artifice, nastiness and lust for power that too often consumes the players and the process.”

In her memoir “Becoming,” she talks about the dreadfulness of politics in recalling the painful challenges of getting tagged with the toxic political stereotype of being called an “angry black woman.”

She got the last laugh, however, because “her book is one of the best-selling memoirs ever. And her book events weren’t a signing in a packed local Barnes and Noble, she filled stadiums and arenas,” said Robert Gibbs, a former White House press secretary and Obama adviser.

“The Obamas occupy the most admired woman and the second-most admired man in the world. It speaks to not just what they accomplished in the White House years but also to who they are as people and how they did it,” Gibbs said.

“When I ran for governor in 2013, I had everyone helping me, but I put a picture of myself and Michelle Obama in every one of my general election flyers. And I didn’t just use it in African American communities. I used it in every part of the state because she’s so popular,” he said, specifying that rural white women as well as black women in cities alike adore the former first lady.

Biden campaign advisers, basking in President Obama’s endorsement of Biden last week, are making sure to give the former first lady space to decide how involved she’ll be with the campaign.

“We know what pretty much everyone else in America does, which is that Michelle Obama is probably the most beloved member of the Democratic Party and her support is a big deal,” said an adviser who wanted to remain anonymous. “Any future announcement would reflect the incredible impact that her voice has. She has a voice that can cross the aisle in a way that very few people can.”

But until then, the Biden campaign is left in the same position as Sharpton, who said he first prays for his family, then the health of aging Supreme Court Justice Ruth Bader Ginsburg and then Michelle Obama.

“God, if you could change her mind, it would help us a lot,” Sharpton says in his prayers.