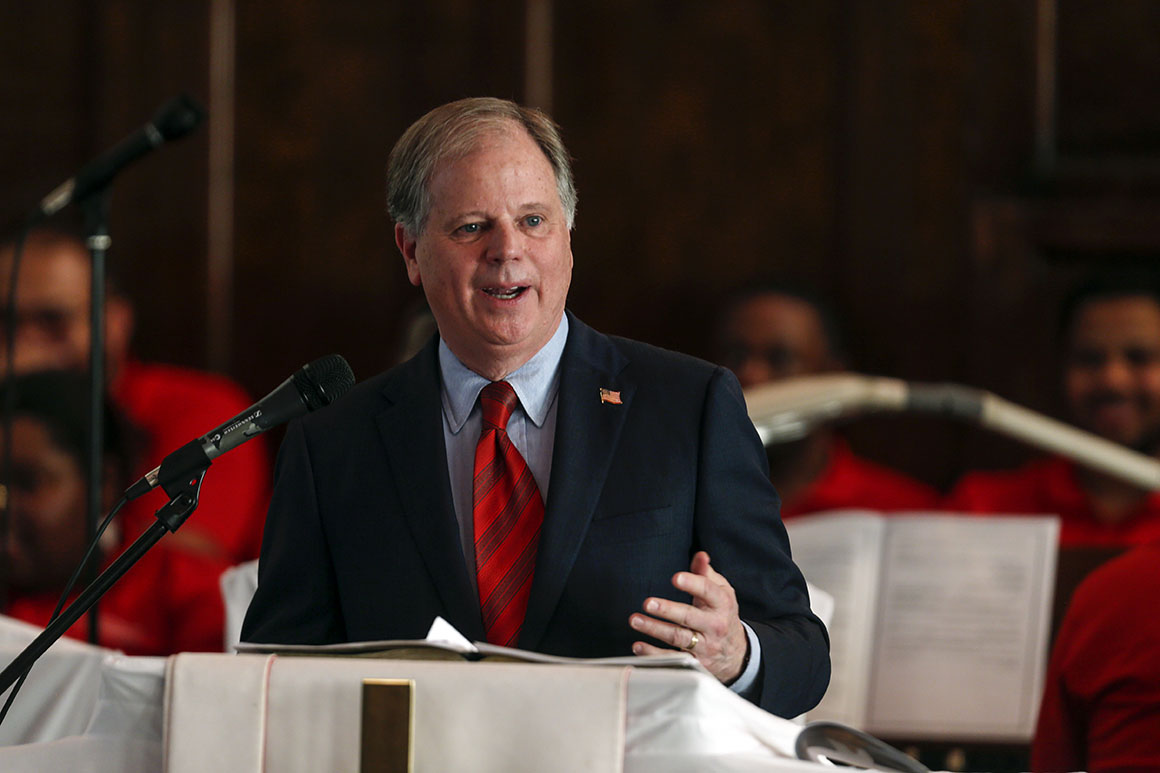 There’s a glaring omission as Democrats lay down millions of dollars to try and win control of the Senate: Democratic Alabama Sen. Doug Jones.

The two leading Senate Democratic campaign groups reserved nearly $ 100 million for the fall in half a dozen states with Republican incumbents. But so far they have put down nothing to protect their most vulnerable incumbent and aren’t yet formally committing to spend big dollars for him.

“I don’t think they have to do that right now. I don’t even have an opponent yet. I don’t think that they’re going to leave us out at all,” Jones said in an interview. “We feel very good about where we are in this race. There’s no question about that.”

Jones faces perhaps the most difficult Senate reelection fight in the country, and it’s reflected by Democrats’ caution at going all in. The party has dumped money into tough races in red states in recent years only to see their candidates and incumbents get blown out from Louisiana to Arkansas to Tennessee, but has also won tough races in Montana and West Virginia.

For now, there are mitigating factors that help explain Democrats’ hesitation. The GOP does not yet have a nominee to face Jones. And because Alabama is not a presidential battleground, Democrats will be able to buy ads there later at a more affordable price than states like North Carolina and Colorado.

Moreover, Jones is sitting on $ 8 million, more than 10 times the war chest of either former Alabama Sen. Jeff Sessions or former Auburn football coach Tommy Tuberville as they slug it out for the GOP nomination. Their runoff, initially scheduled for March 31, was delayed until July because of worries over coronavirus.

If Jones were to win reelection this fall it would dramatically ease Democrats’ pathway back to the majority. If Jones loses, they need to pick up at least four seats elsewhere.

The Democratic Senatorial Campaign Committee’s primary job is to defend incumbent senators. And Senate Majority PAC is aligned with Sen. Chuck Schumer (D-N.Y.), the Democratic leader. So it’s notable that, as of May, neither has fully committed to Jones’s uphill race.

But Republicans say Democrats won’t throw money into a race they can’t win and are confident they will romp over Jones in Alabama, where Trump won 62 percent of the vote in 2016. Public polling for the general election is scarce, but the GOP sees the race as something of a lay-up.

Jesse Hunt, a spokesman for the National Republican Senatorial Committee, said that "Doug Jones has been abandoned because even national Democrats want no part of this suicide mission."

Jones’s seat is the “one pick-up we figured we were going to get,” said Sen. Mike Braun (R-Ind.), who beat an incumbent in 2018. “You’re going to invest where you think there’s a marginal return on investment. [Democrats will] do polling that sees if it’s worth investing. He’s in a precarious spot.”

Sen. Patty Murray (D-Wash.), the No. 3 Democratic leader and a former DSCC chairman, said the party is “not at all” contemplating bailing on Alabama and that Jones’s focus on health care gives him a path to reelection.

Lauren Passalacqua, a spokeswoman for the DSCC, said the party feels good about Jones’s chances and his “independent record” but declined to discuss potential financial commitments.

“While Republicans find themselves in yet another bruising runoff, Doug Jones consistently outraised the entire field and has the resource advantage to organize, turn out and communicate with voters — which is exactly how he won two years ago,” she said.

It would be almost unthinkable for Democrats to totally abandon Jones, given that the DSCC and Senate Majority PAC together sank nearly $ 12 million into Arkansas and $ 7 million into Louisiana in 2014 and nearly $ 6 million into North Dakota last cycle to protect incumbents who all lost by double digits.

Yet in their initial 2018 reservations, the two Democratic groups booked ads for every incumbent who ended up in competitive elections. This year Democrats also haven’t yet reserved money for Sen. Gary Peters (D-Mich.), their only other incumbent who also faces a potentially close reelection race.

Rachel Irwin, a spokeswoman for Senate Majority PAC, said Jones is a “strong incumbent” and his cash advantage will let him “compete and share his story.”

“There’s no doubt that Alabama is a challenging state, but people have a tendency to underestimate Doug Jones at their own peril,” Irwin said.

Republicans have invested early to defend their most endangered senators. The National Republican Senatorial Committee and Senate Leadership Fund, which is aligned with Majority Leader Mitch McConnell (R-Ky.), have put nearly $ 12 million on the board behind Sen. Cory Gardner in Colorado, a more expensive market than Alabama. Gardner’s path to reelection is a bit easier than Jones, but he is still an underdog as an incumbent.

Republicans say they haven’t invested in the Alabama race yet because they believe it’s a shoo-in, though they haven’t ruled out spending in the future. And the GOP says Democrats are bailing on Jones, who won a 2017 special election against Roy Moore.

He’s "been such a loyal lapdog for Chuck Schumer, we anticipate Democrats can’t completely hang him out to dry. But we’ll be there to back up our Republican nominee and ensure this seat flips back to our column," said Steven Law, president of Senate Leadership Fund.

Moore, who placed a distant fourth in March’s primary, was a flawed general election candidate in 2017 accused of pursuing teenage girls as an adult. But Jones’s win there was nonetheless remarkable and hamstrung the GOP for nearly an entire calendar year by narrowing their majority to 51 seats.

National Democrats invested carefully in that race. The DSCC did not spend independent expenditures on television ads, but helped with staff and ground operations, and spent six figures in coordinated funds. Senate Majority PAC quietly funded a super PAC that spent $ 4 million in the race, which wasn’t revealed until the eve of the election.

His race is even more important this time around.

Jones is a centrist but less conservative than Sen. Joe Manchin of West Virginia, and he does not generally draw the ire of liberals for his record and rhetoric. And Democrats say when they talk to donors about Jones, contributors get excited about the race and are quick to pledge money to him.

“The polling does not show enough separation there to justify giving up on it. But it also doesn’t necessarily show that you’ve got to put money in right now,” said one Democratic senator. “Amongst the base, there is tremendous enthusiasm for Doug.”

David McIntosh, president of the conservative Club for Growth, said he expects Democrats to invest eventually. Club for Growth endorsed Tuberville in the primary and has already booked TV airtime for the general election.

McIntosh called the incumbent’s cash advantage a “concern” for Republicans.

“They obviously know the structural advantage that either Republican will have, and that’s the Republican reason for not funding it at this point,” McIntosh said. “Does [Jones] keep it close? And if it’s close does he need money? I think they’re going to wait until much closer to the election to make that calculus."