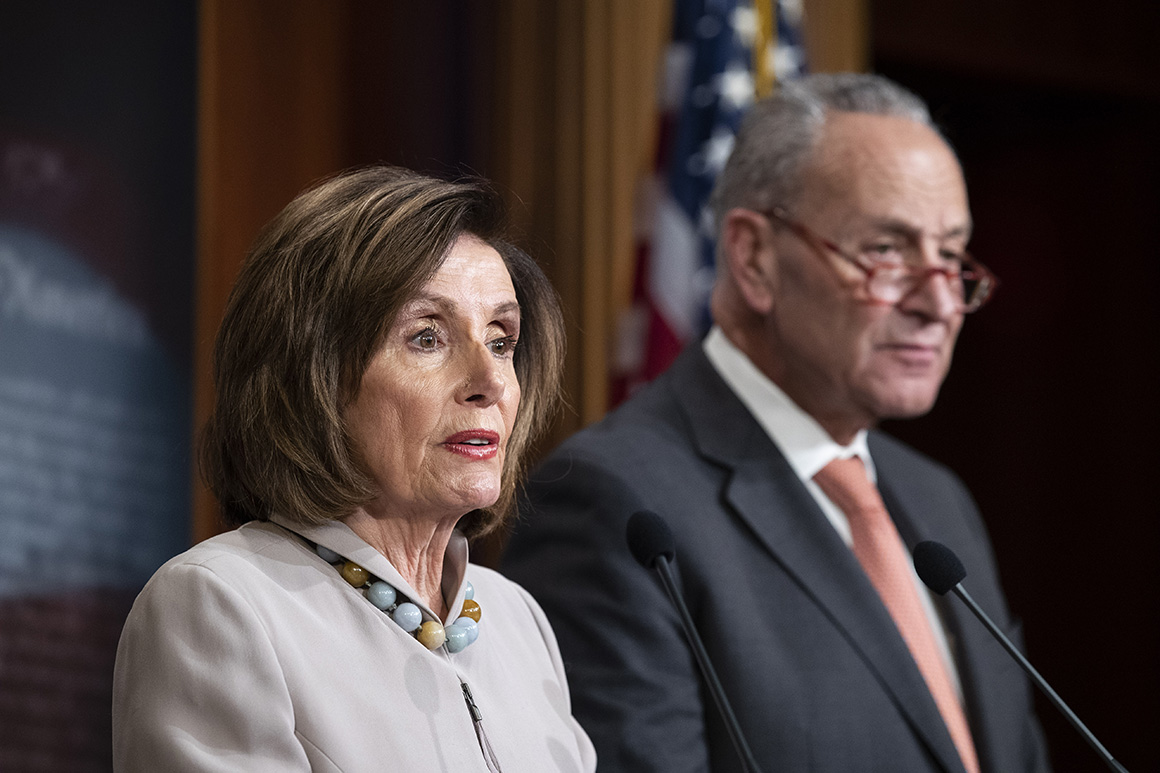 The letter to FBI Director Christopher Wray — authored by House Speaker Nancy Pelosi, Senate Minority Leader Chuck Schumer and the top Democrats on the House and Senate intelligence committees — also included a public request that the bureau brief all lawmakers. It came amid increasingly vocal warnings from Democrats, including from Biden’s presidential campaign, about foreign interference in the 2020 race and fear of another Kremlin-led effort to boost Trump’s reelection prospects.

Republicans were not asked to join the Democrats’ push for a briefing and they have since rejected it as a partisan effort.

The classified addendum to the public version of the letter included intelligence material that “draws, in large part, from the executive branch’s own reporting and analysis,” according to a congressional official.

The packets, the sources said, were sent by Andrii Derkach, a Ukrainian lawmaker who met with Trump’s personal lawyer Rudy Giuliani in Kyiv last December to discuss investigating the Biden family.

In a statement to POLITICO, Derkach said he sent the materials to the lawmakers and Mulvaney with the goal of “creating an inter-parliamentary association called ‘Friends of Ukraine STOP Corruption.’” He added that he recently notified Grassley, Johnson, Graham, and Democratic Sens. Gary Peters of Michigan and Ron Wyden of Oregon “about the content and materials published and voiced” at his news conferences.

Spokespeople for Peters and Wyden said their offices had never received anything from Derkach.

A spokesman for Graham, who chairs the Senate Judiciary Committee, initially deferred questions to Sen. Ron Johnson (R-Wis.), who is investigating Hunter Biden’s role on the board of Burisma, a Ukrainian energy company. Another Graham spokesman, Kevin Bishop, said the senator believes any such information should be handed over to the Justice Department or the intelligence committees to be vetted.

“Having said that, we aren’t familiar with receiving any information from this individual,” Bishop added.

Taylor Foy, a spokesman for Grassley, similarly called the claims “false” and said his office has never received information from Derkach “nor have we made any effort to contact him.” He added that Grassley, who has partnered with Johnson on many of his investigations that have remained out of the public view, had not been given access to the classified attachment to the Democrats’ letter, and slammed Democrats for “running to the press with leaks apparently from classified documents and falsehoods.”

Johnson’s spokesman, Austin Altenburg, said “the claims are false” and later said the senator has “never received nor would we ever collect information from this individual or individuals like him.” Another former Ukrainian lawmaker, Oleksandr Onyshchenko, told The Washington Post earlier this month that he gave materials, including tapes allegedly featuring Biden, to Johnson’s committee.

Derkach appeared to post at least some of the materials he claims to have sent to the lawmakers and Mulvaney on his website, NabuLeaks, which he set up last year as a platform for his allegations against the Bidens and former Ukrainian President Petro Poroshenko.

In a December letter to Nunes that he posted on the site, Derkach said he would be sending the congressman materials that included “the facts of inefficient use of U.S. taxpayers’ funds,” excerpts from a related criminal proceeding, and a transcription of a news conference he had held that appeared to include leaked audio of Biden speaking to Poroshenko. Derkach said in the letter that he would be sending the same materials to Mulvaney.

Derkach denies that his aim is to damage Biden’s presidential prospects, and says he is not working on behalf of the Kremlin. He has said previously that “the main purpose of our activity is pursuing the interests of Ukraine, exposing international corruption, [and] maintaining partnership relations between strategic partners — Ukraine and the USA.”

Derkach, who was formerly aligned with Ukraine’s pro-Russia Party of Regions and is now an independent, is an alumnus of Moscow’s FSB academy, formerly known as the Dzerzhinsky Higher School of the KGB. Derkach has denied any connections to foreign intelligence services.

Several of the people Derkach has made allegations against over the past year have since been called as witnesses in Johnson’s investigation, including former special envoy for international energy affairs Amos Hochstein, former U.S. ambassador to Ukraine Geoffrey Pyatt, former State Department official Victoria Nuland and career diplomat George Kent, who now serves as a deputy assistant secretary of State. Kent, a key witness in the impeachment inquiry, is slated to testify before Johnson’s committee as soon as Friday.

The overlap has heightened Democrats’ long-held suspicions that the probe has become a vehicle for what they describe as “laundering” a foreign influence campaign to damage Biden. Some Democrats have even called Johnson an unwitting agent of Russian disinformation. POLITICO previously reported that the classified attachment mentions Johnson’s investigation as a source of Democrats’ concerns about potential Russian interference in the 2020 presidential election. The public letter does not specify the reasons for that concern.

Wray has previously said Americans should share with the FBI any information from foreign governments or their emissaries intended to influence the election.

“If any public official or member of any campaign is contacted by any nation-state, or anybody acting on behalf of a nation-state, about influencing or interfering with an election then that’s something the FBI would want to know about,” Wray said on June 12, 2019 — a day before Trump rebuked him and said he would probably accept such help.

Johnson, chairman of the Senate Homeland Security and Governmental Affairs Committee, has maintained that the investigation is legitimate and that his staffers thoroughly vet all of the information they receive.

“We’re being very careful with our investigation. This information that supposedly was delivered to us — we didn’t get anything. I don’t know what they’re talking about,” Johnson said this week, referring to the contention that his investigation is based on Russian disinformation. “We look at everything we get in, and I take everything with a huge grain of salt. We’re very careful. We vet this stuff.”

Hunter Biden has acknowledged that he secured the Burisma position due in part to his last name. But the Biden campaign has slammed the broader Johnson investigation—which is predicated largely on Biden’s efforts to remove a Ukrainian prosecutor whom Johnson has acknowledged “the whole world” wanted gone—as a “desperate taxpayer-funded smear campaign” based “on a farcical, long-debunked, hardcore right-wing conspiracy theory.”

Johnson recently subpoenaed a Democratic public-affairs firm that did consulting work for Burisma, and is eyeing subpoenas for Hochstein and Tony Blinken, a senior foreign policy adviser to Biden’s campaign.

Graham has similarly cautioned that information originating from a foreign source should be thoroughly vetted by U.S. intelligence agencies, warning in February that “Russia is playing us all like a fiddle.”

Some Democrats have obliquely referenced the intelligence, suggesting it refers to a nefarious Kremlin-backed influence campaign akin to the one that roiled the 2016 election.

“I have read the intelligence behind this concern. It’s highly credible and should be briefed to every Member of Congress. Our elections belong to us,” said Rep. Eric Swalwell (D-Calif.) in a Wednesday tweet.

Reached by phone, Swalwell declined to elaborate on any aspects of the intelligence that gave him concern.

Although Republicans have been similarly tight-lipped, they pointed to statements like Swalwell’s to suggest Democrats are attempting to weaponize classified intelligence to harm Republicans politically.

“It was clearly a partisan letter,” Sen. Marco Rubio (R-Fla.), the acting chairman of the Senate Intelligence Committee, told POLITICO when asked about the Democrats’ letter to Wray.