Democrats tread carefully with Trump amid fears of retaliation 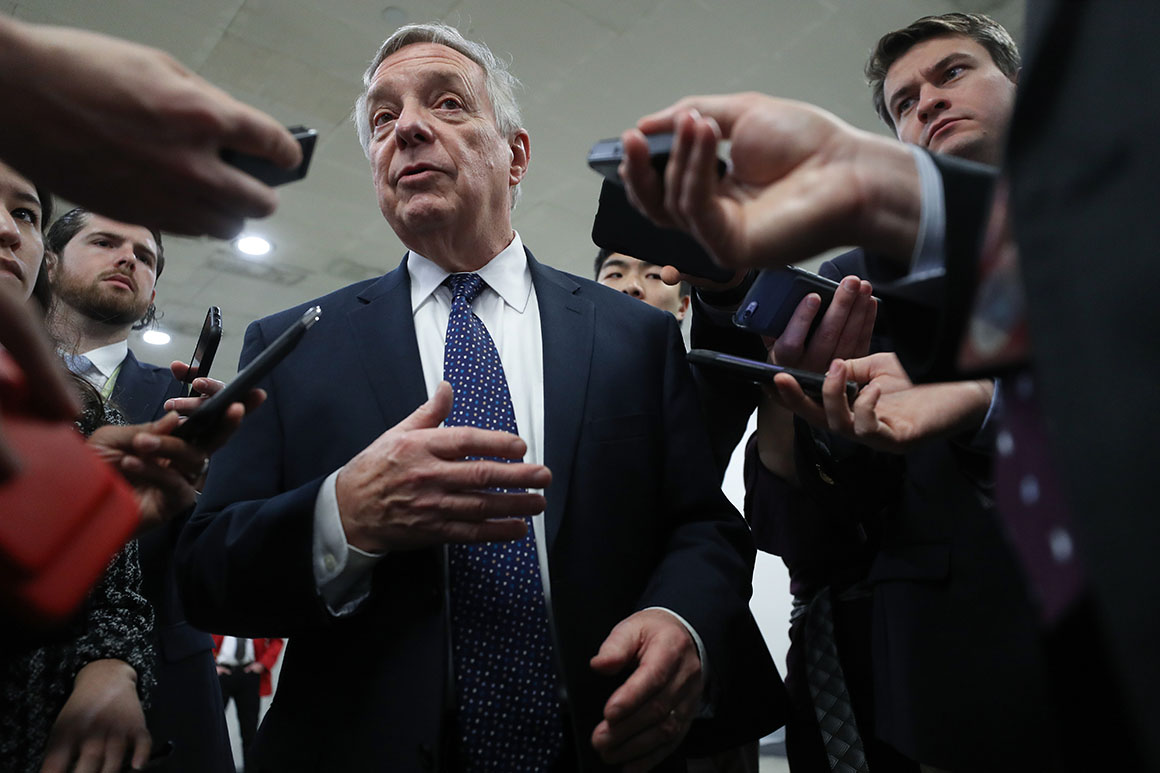 Sen. Dick Durbin was out for a bike ride on a recent Sunday at a park in his hometown of Springfield, Ill., when his phone rang.

It was Vice President Mike Pence.

“I pulled my bike over to the curb and talked to him about everything under the sun, from the whole question of beds and medical equipment and then on down the line,” the Senate minority whip recalled. “I found him to be constructive and positive in our communications.”

Durbin’s account notably did not center on the series of serious missteps that most Democrats see in President Donald Trump’s handling of the coronavirus pandemic.

Congressional Democrats have spent four years berating Trump as unhinged and unprepared for a crisis. But now, they must work with the White House to save lives in their states — a reality that could spare Trump from some of their harshest attacks.

Some Democrats say they fear any criticism lobbed at the Trump administration could come with retribution that has real costs. The dilemma facing lawmakers also comes as the 2020 elections approach, when Trump will seek to oust Democrats from office and their job performance amid the crisis will be judged.

There’s perhaps no better example of someone facing this conflict than Sen. Doug Jones, the Alabama Democrat who has become the GOP’s top target in the Senate this November.

But Jones, who is eager to help his constituents, also emphasized that he is working to find common ground with the Trump administration and is “open to discussions with anybody.”

Meanwhile, vulnerable GOP incumbents like Sens. Cory Gardner of Colorado and Martha McSally of Arizona have seen Trump intervene on their behalf to get supplies to their states.

It was a little harder for Sen. Jon Tester (D-Mont.), whom Trump tried desperately to oust in 2018.

During a call with Federal Emergency Management Agency Administrator Peter Gaynor and other officials, Tester said he was told Montana would receive 80,000 N95 masks from the national stockpile. Instead, he said, the state received less than 11,000 masks. So Tester brought it up with Pence, on a call with Senate Democrats.

“Guess what? They showed up,” Tester said in an interview. “[FEMA] didn’t respond, but the vice president did. … The bigger issue here is that if this happened in Montana, it’s probably happening all over the place.”

Tester sent a thank you note to Pence.

A spokesperson for FEMA said the first shipment for personal protective equipment to Montana included 22,600 surgical masks and was delivered March 20. The spokesperson said the state will also soon receive two more shipments, one with 22,600 masks and another with 143,000 masks.

Even as many Democrats move cautiously, they have panned the White House for failing to deliver crucial supplies in their home states and districts. They’ve criticized the Trump administration for failing to fully invoke the Defense Production Act amid a shortage of medical equipment. And they’ve lashed out when Trump removed the watchdog in charge of overseeing trillions in coronavirus funds.

Some Democrats have even claimed that the Trump administration has been delaying or withholding much-needed medical supplies to their states — charges the White House denies.

In a letter to Pence this month, Sen. Chris Murphy (D-Conn.) wrote that “there remains a serious and damaging perception” that medical supplies and personal protective equipment aren’t being distributed based on threat, “but rather based on political or personal motives.” He pointed out that Connecticut — a solidly blue state — had received only 14 percent of its request for protective gear and noted news reports that Florida, whose governor speaks to Trump on a regular basis, received the supplies it requested.

Murphy has also tried to reach out to White House adviser Peter Navarro, but was instead directed to a Department of Defense official.

"People are fearful that they are going to be retaliated against if they ask tough questions about what’s happening and what’s not happening and how we can make progress. That’s a problem,” added Sen. Tina Smith (D-Minn.).

The White House did not comment for this story, but Republicans defended the administration’s handling of the crisis.

“When you look at the fact that we continue to lower the estimate of the number of people who will lose their lives, the response has been very successful,” said Sen. John Barrasso of Wyoming, a member of GOP leadership. “The fact that we’ve from gone 1.5 [million] to 2 million projected deaths to less than 100,000 is a direct result of the response of the administration and the American people.”

Some Democrats warn that their party needs to be aware of the tone of any message right now.

“If we disagree with somebody, we’ve got to do it in a very careful way,” Rep. Henry Cuellar of Texas, a conservative Democrat who is close to the Trump administration, said in an interview. “You’ve got to be careful you don’t attack the president in a certain way, because the public is going to say, ‘Hey what are you doing, you’re supposed to be working together.’”

Democrats have turned in recent days to Treasury Secretary Steven Mnuchin amid frustration with Trump. For instance, Mnuchin spoke with Sen. Jack Reed (D-R.I.) about the disbursement of funds to his state. And Mnuchin is once again serving as the point man for negotiations with Senate Minority Leader Chuck Schumer (D-N.Y.) and Speaker Nancy Pelosi (D-Calif.) on the terms of the next relief package that will be at least a quarter trillion dollars.

Those talks between Mnuchin and Pelosi have partly substituted for the lack of communication between Pelosi and the president, who haven’t spoken directly since October. Pelosi is now ripping Trump’s "failures to adequately plan for an outbreak on U.S. shores."

Other top Democrats are also unflinching in their criticism: House Democratic Caucus Chairman Hakeem Jeffries (D-N.Y.) called Trump’s response to the crisis an “unmitigated disaster.” House Intelligence Committee Chairman Adam Schiff (D-Calif.) warned that Trump might try to use the relief money to “reward his own businesses.”

And there is a heightened sense of concern among some Democrats in the hardest-hit regions who don’t trust Trump not to play politics with the response in their states.

“It’s certainly something that we all think about,” said Rep. Dan Kildee (D-Mich.), who has watched Trump spar with his home state Democratic governor, Gretchen Whitmer, amid rising caseloads of coronavirus.

“His instincts have always been about how any decision reflects on himself, and not whether it’s the right decision,” Kildee said. “But we genuinely want him to succeed, because him succeeding is saving American lives.”